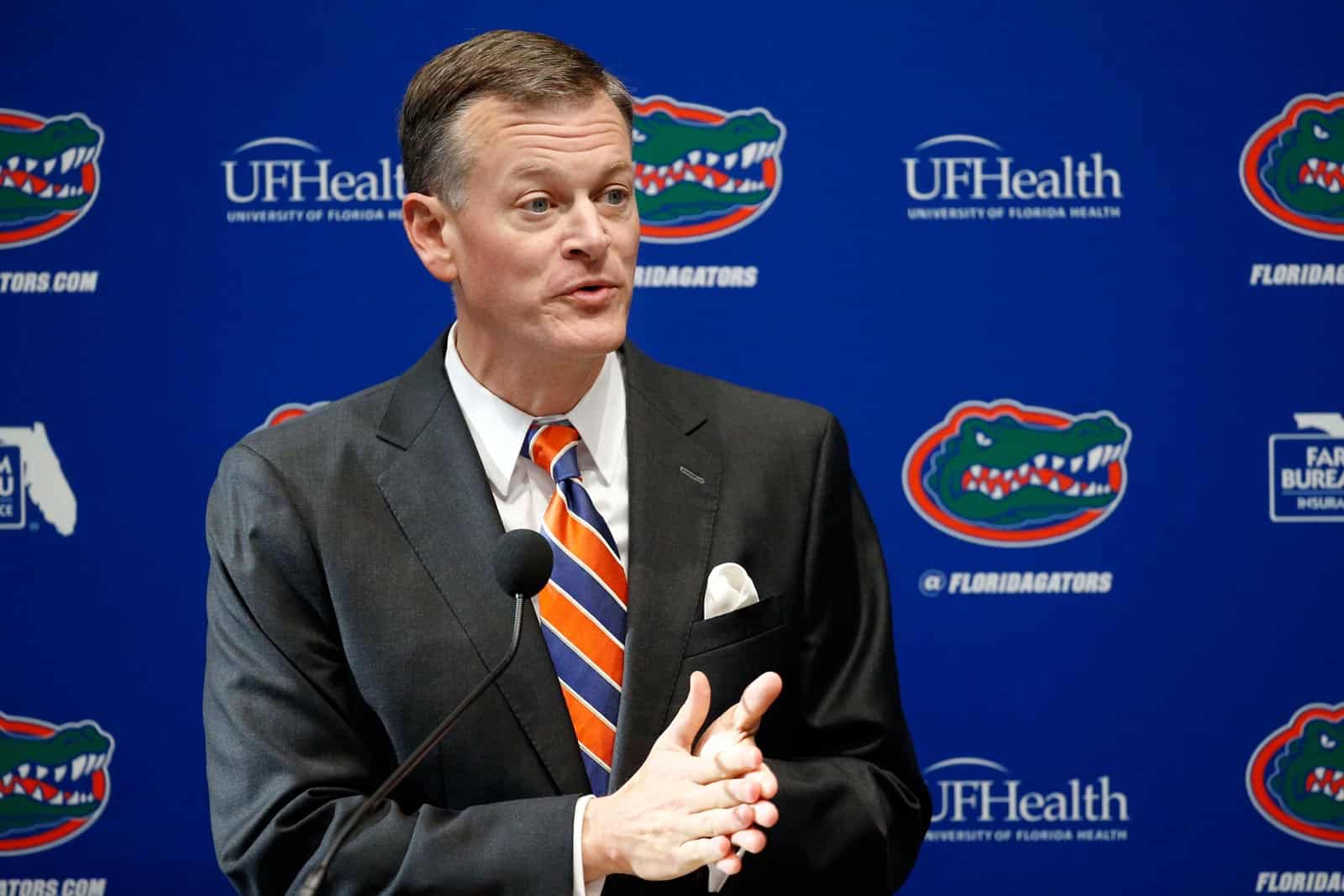 The Florida Gators haven’t played the toughest non-conference football schedule in recent years, choosing instead to primarily stick around the Sunshine State.

Florida’s non-conference schedule typically consists of an annual contest against the in-state rival Florida State Seminoles, two mid-tier or lower Group of Five opponents, and then one team from the Football Championship Subdivision (FCS).

There have been some deviations from that scheduling model, such as playing the Michigan Wolverines at AT&T Stadium in Arlington, Texas, in 2016, and taking on the Miami Hurricanes this season at Camping World Stadium in Orlando, Fla.

Additionally, Florida played two FCS opponents in both 2018 and 2019, which is an extremely rare occurrence for Power Five programs.

But Florida Director of Athletics Scott Stricklin, who came over from Mississippi State in 2016, has slowly been working to add tougher opponents to their future football schedules.

Florida State will, of course, continue to be a staple on UF’s non-conference schedule, no matter what the current situation in Tallahassee is. Stricklin has also added home-and-home series with the Utah Utes for 2022 and 2023, the Miami Hurricanes for 2024 and 2025, the Colorado Buffaloes for 2028 and 2029, and the Texas Longhorns for 2030 and 2031.

Interestingly, the game at Utah in 2023 currently stands as the first time the Gators will play a true road game outside of the state of Florida since taking on Syracuse at the Carrier Dome in 1991. Florida lost that game 38-21.

On Tuesday, Stricklin took to his Twitter account to announce to the rest of the Power Five teams that the Gators are looking to schedule more opponents for home-and-homes.

Who will answer the call? Will it be Clemson, Michigan, Notre Dame, Ohio State, Oklahoma, Oregon, Penn State, and/or USC? There are plenty of options out there, and most are willing to play anyone, anytime, anywhere.

Who would you like to see Florida play? Let us know in the comments below.

ND head coach Brian Kelly was quoted as saying he’d been approached by a Southern team about a home-and-home in the next decade and basically said he balked unless they agreed to come up in November. Who knows if that was posturing or not, but I thought at the time it sounded like that was Florida, and this just strengthens my suspicions.

Notre Dame’s ACC arrangement will give the Irish regular occasion to play in Florida against the ‘Canes and the ‘Noles.

The just-completed home-and-home fits this description, but was booked before ND joined the ACC and adopted the ACC scheduling arrangement.

UNLV and SMU need nonconference games 2024 and after. San Diego State and San Jose State needs NC games 2025 and after. These aren’t P5 schools, but pretty good areas to recruit (Dallas; California) and Florida fans might go to UNLV as a pseudo-bowl trip…

C’mon Florida. This isn’t hard. Any ACC school not playing Notre Dame has 4 OOC slots. At least try Pitt, Syracuse, or BC. How about Nebraska or another B1G West school like Illinois or Wisconsin that needs to strengthen a schedule.

I think Miami vs Florida should be played every year…

Michigan State has ND in 26/27 but it would be cool if they had the UF games inverse of that for home/away. Texas has some real interesting series coming up, with Alabama, Michigan, Ohio State, Georgia and UF so it’s good to see these schools start to step up. Even Michigan is finally coming out to play.

Florida has never played: Navy, Boise State, Wisconsin. Minnesota, Stanford, TCU, Arizona State, Purdue, or Arizona. I consider all of these to be “Power” opponents and any of them would be good.

Colorado is on this list too but they were already scheduled.

2032 and 2033 look like the next most realistic times Notre Dame and Florida could play a home and home. Hopefully the game in South Bend would be in November. Who knows maybe Florida would be willing to play the Irish in the Shamrock Series before that. Lots of possible sites Chicago, Indianapolis, Detroit, Jacksonville, Orlando, Tampa, Atlanta, even Houston or Dallas.

It would be great to see something like the SEC-Big-12 challenge in basketball between Northern and Southern teams say Veterans Day weekend when the conferences take a week away from conference play for a meaningful non-conference game. We also would get the chance to see teams like Alabama and Florida play in Northern conditions.

Clemson ! We try to bolster our schedule every year with SEC teams. South Carolina does nothing for our strength of schedule, and unfortunately A&M has not taken off under Jimbo the way most people figured they would.

I say we kick Akron off the schedule next year and play Florida. That would give us Florida, Notre Dame, and South Carolina out of conference. That would be a great schedule.

Looks like Clemson in 2037/2038 will happen. ESPN has updated with Dan Radakovich’s (ClemsonAD)’s tweets…

As a die-hard Boise state Bronco fan, I would fully support doing a 2 and 1 with Florida. I know that Boise State is not Power 5 but they are still a quality opponent.

Definitely want to see a home and away series with Clemson

Is Florida willing to play Wake Forest or Duke in a home and home series?

It should be USC vs Florida, bruh, people that iz Trojans fans wanna pay money for those games. Instead, of USC takin’ L’Z (TBH).