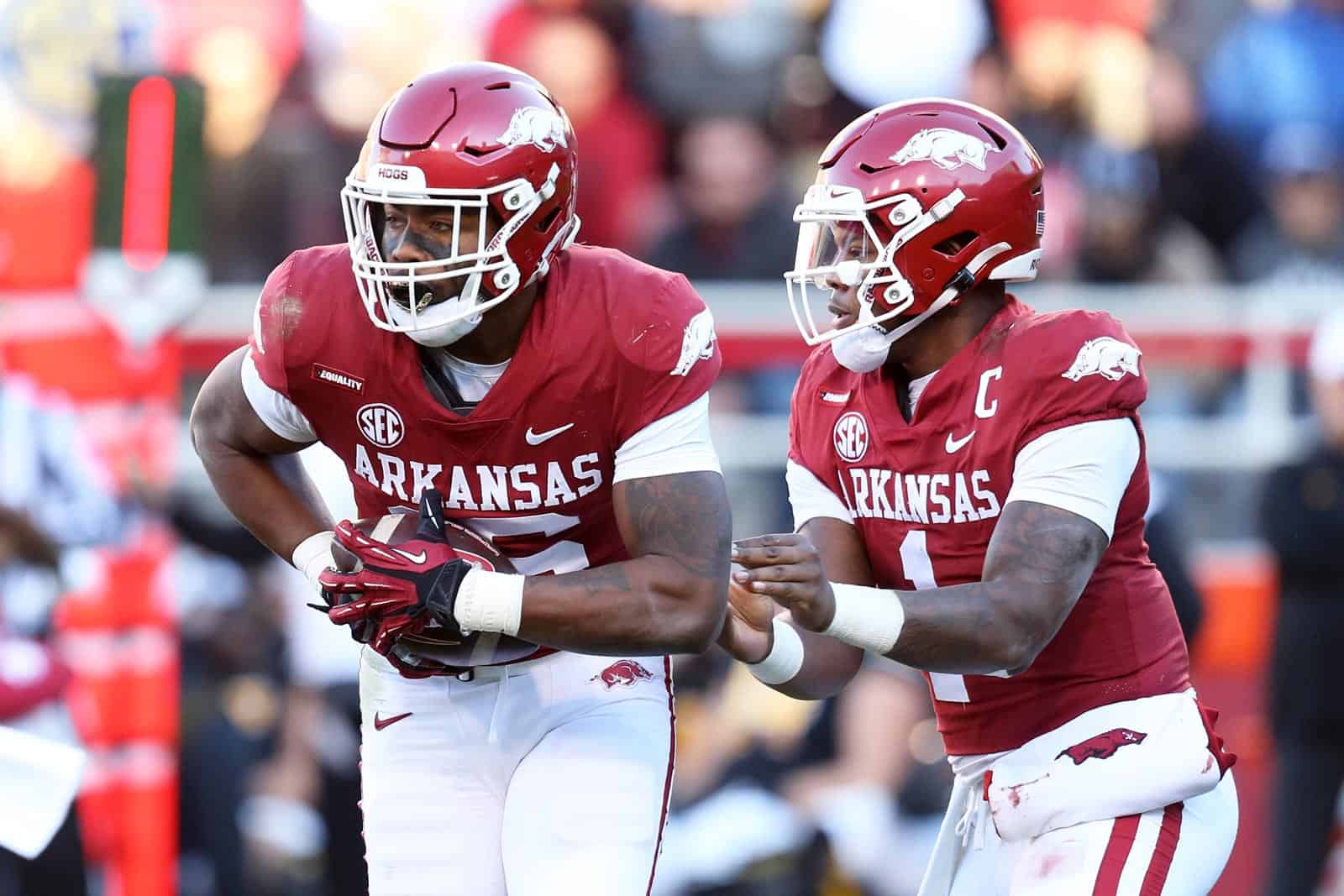 Of the approximate 1,572 matchups slated at the FBS level this season, a precious 54 – or three percent – feature two programs that have never, ever, met on the gridiron.

It’s a rare opportunity to bear witness to something that no other human has seen before, and, even better, it’s taking part in the history of the greatest team sport on the planet.

Is anyone else so excited that they could run through a wall?

The first of only two first-ever matchups between Power 5 members in 2022, TCU and Colorado just missed clashing in the Big 12, the Buffs fleeing the league after the 2010 season and the Horned Frogs joining up in 2012.

The Frogs and Buffs are slated to meet again in next season’s opener, this time in Fort Worth.

One of three first-ever matchups for Arkansas in 2022, this game ought to be every bit as good as any Power 5 vs. Power 5 combo in Week 1. In one corner, it’s a Cincinnati program, which as a G5 team, beat all the odds and earned its way into the CFP bracket last season while in the other it’s an Arkansas club that posted its best record in a decade last year with a head coach that was initially advertised as a laughable hire. This is a delicious battle between two scrappy teams.

Cincinnati hasn’t beaten a current SEC member during the regular season since vanquishing Kentucky 24-3 at home in 1996. It hasn’t won such a game on the road since a 1971 visit to Texas A&M that resulted in a 17-0 shutout victory.

Though the trajectory of Marshall and Notre Dame’s football history are worlds apart, both offer a narrative that has global appeal. This matchup marks the intersection of the two stories – the program that struggled through an unthinkable tragedy to even field a team visiting the most storied powerhouse in college football. Regardless of how it plays out from a competitive standpoint, it’s a great moment for a sport in need of a great moment that has nothing to do with money.

Adding to the allure is that Marshall visits South Bend just after the Irish return from their blockbuster roadie at Ohio State. Though an unlikely upset, the Herd have posted five-straight winning seasons and Notre Dame, win or lose, could be suffering a hangover from its foray against the Buckeyes.

Marshall hasn’t played a Power 5 grade opponent since 2018 when it suffered losses vs. NC State and at Virginia Tech. It hasn’t beaten a P5 foe since the 2015 season opener, a 41-31 home victory vs. Purdue. This is Notre Dame’s first-ever matchup vs. a program that is a Sun Belt member at gametime.

Though this one hardly screams “blockbuster” it will be a great litmus test for the Aggies who open by hosting FCS powerhouse Sam Houston and then further their warm-up exercises vs. App State before welcoming Miami Fla. in Week 3.

The second of the only two Power 5 vs. Power 5 first-ever matchups in 2022, this game also marks Mississippi State’s first football game in the state of Arizona. The Bulldogs are technically 1-2 all-time vs. the Pac-12, most recently falling twice to Oregon in a home-and-home series in 2002 and 2003. The only-ever win came in a 1977 regular season game at Washington, a 27-18 victory that was eventually one of 19 wins forfeited due to the use of an ineligible player.

The Bulldogs and Wildcats have plans to meet again next year, this time in Starkville.

Not only is this the first time that the Hogs and Cougars have met on the gridiron, it’s also the first time in history that Arkansas has made a stop at one of the three FBS football destinations in the state of Utah. The Razorbacks have never lost to an opponent that is currently classified as an independent, their entire body of work coming via a 6-0 mark vs. New Mexico State.

BYU is 7-7 all-time against the current SEC, most recently visiting Tennessee in Week 2 of the 2019 season and scoring a 29-26 win.

The two schools will meet again next season, this time in Fayetteville.

This under-the-radar matchup features the up-and-coming Cajuns at a blueblood P5 program that’s in the throes of an epic identity crisis. Where Louisiana has posted a 34-5 record since 2019, the Seminoles are 19-27 since 2018. What adds to the intrigue is that this first-ever is placed late in the season, when it will be more than just a meaningless non-conference fixture.

With Marshall, Old Dominion, and Southern Miss joining from C-USA and James Madison moving up from the FCS, 2022 marks the beginning of a new era for the Sun Belt Conference. From a scheduling standpoint the expansion offers up eight first-ever matchups this season. Rather than being one-and-done non-conference affairs, each of these combinations mark the very beginning of what could be, if each participant sticks around, a long-term relationship that becomes a heated rivalry.

Dan-ke for documenting the historically themed & more interesting Matchups of the 2022 Season.

The History of Uni. Louisiana Ragin Cajuns football in who they played is much more interesting than your choice to put their Opponents under the Umbrella of 2022 Athletic Conference Membership.

Uni. Miami represented the Southern Intercollegiate Athletic Association in 1929 & 1930. The ACC didn’t exist.
There were 31 Schools in this Association. 19 of which I recognize as playing NCAA Sports today, some 1-A football, 1-AA football, Division 2 football, NAIA football & some 1-AAA Basketball, having discontinued football.

The distinction is not obvious to me.

It’s a clear distinction to me: Marshall is a much, much, much more successful program than UNLV. UNLV has the fewest wins of any FBS team with 500+ games played at that level while Marshall had multiple conference championships and had past years as a potential NY6/BCS buster.

What are Marshall’s five best FBS wins ever?

PeteF3, what are Marshall’s five best FBS wins ever?

Backing up your statement with 5 Examples “while Marshall had multiple conference championships & had past years as a potential NY6/BCS buster.” will be like a 1-A fbs Team beating a 1-AA fChampionshipS 63 scholarship Team @ Home.

Sloane, I’m sure the difference between playing in the Mountain West and probably a larger number of P5 buy games versus playing in the MAC then CUSA accounts for a healthy, but not the full, chunk of the winning percentage differential you cite. But what have been Marshall’s big wins?

I love the green uniforms. I love Huntington, WV. I love the We Are Marshall movie (of course while being tremendously saddened by the developments that spawned it) …. but what have the big wins been?

How close were the Thundering Herd to the NY6 / BCS? I’m not ruling it out, but I don’t recall such proximity. Please refresh my memory / enlighten me.

I am not trying to wow anyone with Marshall’s prowess which is why I chose to compare this discussion to trying find the tallest midget on the Notre Dame schedule, but Marshall is clearly that winner and UNLV is clearly not.

Marshall is a school that has played in lesser Group-of 5 leagues but has had 8 double-digit win season out of 24. UNLV has been continuously overmatched every season (except for two; 8-5 and 7-6) and continues to be a terrible team in an interesting city. That does not “heighten” them in this discussion.

PS – The 1999 Marshall’s squad finish ranked 12 in the BCS and 10th in the Coach’s Poll. More recently in 2014 they finished in second behind Boise State for the G-5 New Year’s Six bid with a 13 and 1 record. They are clearly the taller midget of the two.