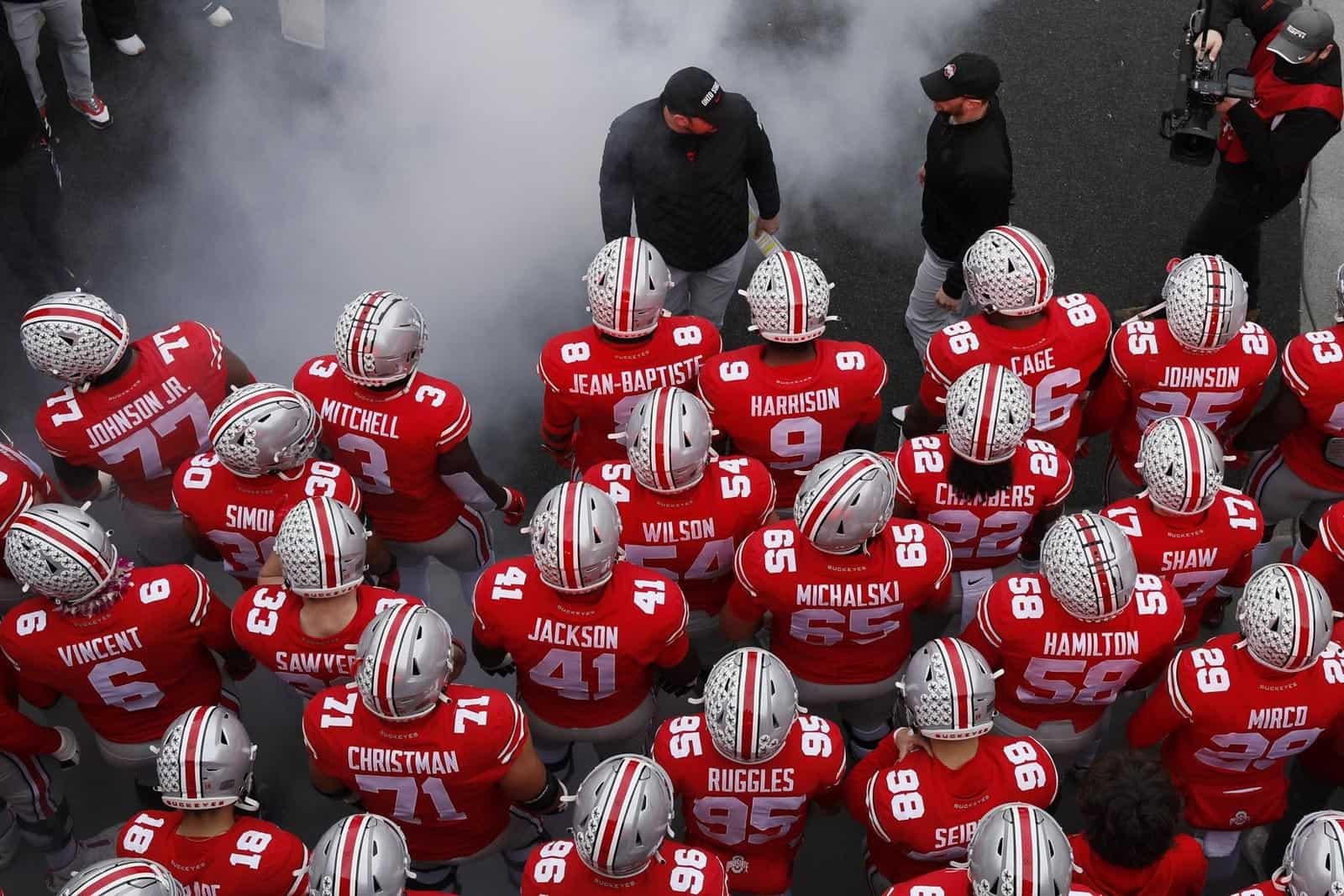 With 11 FBS games on tap this Saturday in what’s Week 0 of the 2022 season, college football is officially back.

Before Week 1 gets underway next Thursday – a smorgasbord featuring a delicious 84 contests over five days – here’s a look at some of the wacky and wild caveats of the larger 2022 schedule.

It’s 26 facts pulled from the 1,574 regular-season games that will ultimately define the season – a tasty appetizer for a 13-week meal that will leave us all patting our collective bellies.

1A. (8) MICHIGAN won’t play a Power 5 opponent outside of Big Ten play for the first time in 78 years

The Wolverines’ non-conference schedule consists of consecutive home games vs. Colorado State, Hawaii, and UConn, making it the first time since 1944 that they’ve failed to schedule an opponent that is currently a Power 5 member (or Notre Dame) outside of Big Ten action. Those long-ago Wolverines faced a trio of independents in Iowa Pre-Flight, Marquette, and Pennsylvania (not State). As of now, Michigan is set to become repeat offenders next season with a non-conference line-up vs. East Carolina, UNLV, and Bowling Green.

Indiana: FCS Idaho, Western Kentucky, at (23) Cincinnati (although Cincinnati does count as a P5 under the Big Ten’s strength of schedule requirement)

2. JAMES MADISON will play its first ever season in the FBS

James Madison’s move from the FCS Colonial Athletic Association to the Sun Belt expands the FBS ranks to 131 members. The Dukes first fielded a football team in 1972 and have won two national titles capturing NCAA Division I-AA (FCS) crowns in 2004 and 2016. They finished 12-2 last season losing to North Dakota State in the semifinals of the FCS playoffs.

3A. AUBURN, FLORIDA, MISSISSIPPI STATE, SOUTH CAROLINA, and TEXAS are the only teams scheduled to play THREE members of the preseason AP Top TEN

3B. MISSISSIPPI STATE is the only team scheduled to play SIX members of the preseason AP Top 25

The Bulldogs add games vs. (19) Arkansas, at (20) Kentucky, and at (21) Ole Miss to their contests at (1) Alabama and vs. (3) Georgia and (6) Texas A&M giving them the MOST preseason ranked opponents in the nation. It amounts to MSU playing a full half of their schedule against Top 25 foes.

4. HAWAII and WESTERN KENTUCKY will both play 13 regular-season games

The Rainbow Warriors and Hilltoppers are the only FBS clubs to play more than a dozen games in 2022 due to what’s known as the Hawaii Exemption.

The Hawaii Exemption allows Hawaii and teams that play in Hawaii the opportunity to schedule a 13th game. This helps those schools earn an extra paycheck, gate revenue, etc. to offset the larger cost of traveling to and from the islands.

While 15 Power programs have dates booked at a Group of 5 venue in 2022, this trio doubles down with a pair of such trips.

Vanderbilt: at Hawaii, at Northern Illinois

7. CENTRAL MICHIGAN finishes the regular season with consecutive games vs. its instate rivals for the first time in 30 years

The Chippewas wrap up 2022 with a Wednesday night visit from Western Michigan (Nov. 16) followed by a Friday night roadie at Eastern Michigan (Nov. 25). The last time they closed out a season with back-to-back games vs. their fellow in-state MAC programs was in 1992 when they scored a home win over EMU on Nov. 7 and suffered a loss at WMU on Nov. 14. That was 13 seasons before the introduction of the Michigan MAC trophy which CMU currently holds for the first time since 2017.

8. AUBURN and (2) OHIO STATE won’t play a game away from home until OCTOBER 8

The Tigers and Buckeyes will both have the benefit of sleeping in their own beds until Week 6. Auburn hosts FCS Mercer, San Jose State, Penn State, Mizzou, and LSU before finally hitting the road to visit (3) Georgia on Saturday, Oct. 8. Ohio State kicks off with a visit from (5) Notre Dame and then welcomes Arkansas State, Toledo, (18) Wisconsin, and Rutgers before finally taking a road trip to (15) Michigan State, also on Saturday, Oct. 8.

9. Only THREE of the 22 MAC games scheduled in November will be played on a Saturday

10. (3) GEORGIA, (23) CINCINNATI, and APPALACHIAN STATE are the only teams with winning records against their entire set of 2022 opponents

While 26 Power 5 members, plus both Notre Dame and BYU, are scheduled to face two members of the preseason AP Top Ten in 2022, only one Group of 5 member can claim such an uphill battle. The Golden Flashes are slated to make a Week Two visit to (9) Oklahoma and then pack their bags again for a Week 4 date at the defending champs (3) Georgia.

PS Kent State opens the season with a roadie at Washington.

12A. FIVE teams will play EIGHT games at home

While the lions’ share of the FBS is set to play six or seven home games this season, these clubs will host eight – or 66 percent – of their opponents at home. It also means these lucky winners have just four true road trips booked.

The anti-thesis of the winners listed above, not only do these clubs have seven true away dates booked, but they’ll also only appear in front of their home fans five times this season.

13. (19) ARKANSAS and ARKANSAS STATE are playing the most first-ever opponents

The two FBS programs hailing from The Natural State will play the most first-ever foes from the Power 5 and Group of 5 ranks respectively. Arkansas has first-ever meetings vs. (23) Cincinnati, at (25) BYU, and vs. Liberty while Arkansas State has never-seen-before action at (2) Ohio State, at Old Dominion, vs. James Madison, and vs. UMass.

As a note: Coastal Carolina ties Arkansas State with four first-time foes: vs. Army, at Marshall, vs. Southern Miss and at Virginia.

14. AUBURN opens with an FCS opponent for the first time in 23 years

The Tigers’ kickoff game vs. FCS Mercer marks the first time since 1999 that they’ve began a season vs. a non-FBS opponent. The ’99 squad opened with a 22-15 win over Appalachian State which was still a member of the FCS Southern Conference at the time. Those Tigers went 5-6 in what was the first of the ten seasons of the Tommy Tuberville era.

15. MISSISSIPPI STATE at ARIZONA and TCU at COLORADO are the only first-ever matchups between Power 5 members

There are 54 never-before-seen on a football field, first-ever matchups in the FBS ranks in 2022. Of these, only the Bulldogs vs. the Cats and the Hogs vs. the Buffs feature two teams hailing from Power 5 leagues.

16. NAVY won’t play a game at home after October

After hosting five of its first eight games in Annapolis, the Midshipmen will hit the road for their final four contests. November begins with a roadie at (23) Cincinnati on the 5th, continues with a neutrally sited meeting with (5) Notre Dame in Baltimore on the 12th followed by a visit to UCF on the 19th.  After two weeks off (unless they ascend to the AAC title game on Dec. 3), the season wraps with Army in Philadelphia on Dec. 10.

If the Bears’ 2022 schedule looks familiar, well, it is. The only opponent Baylor will square off with this year that it didn’t face last season is the FCS UAlbany Great Danes, which replaces FCS Texas Southern from the 2021 schedule. Other than that, Baylor plays the exact same 11 teams, only they flip the venue in each pairing, playing last year’s home games away and last year’s away games at home.

18. EAST CAROLINA has more opponents ranked in the preseason AP than any other G5 program

The Pirates open their 2022 campaign with a visit from (13) NC State and then wait until the end of October to travel across the country to play at (25) BYU. After a week off they’ll make the trek to Cincinnati to clash with the (23) Bearcats and then return home to host (24) Houston.

19. UCLA will play its first ever game vs. a MAC team

In its 103-year football history the Bruins have never played one of the 12 teams that currently field the MAC. All that changes on Saturday, Sept. 3 when Bowling Green visits the Rose Bowl for only its third-ever meeting with a Pac-12 club. The Falcons are 0-3 vs. the West Coast P5ers, falling at Oregon in 2018, at Arizona in 1987, and at Washington in 1986. If this time they don’t succeed they’ll have another whack at the Pac in 2026 when they visit Arizona State.

20. APPALACHIAN STATE, ARMY, and MARSHALL are the only teams playing TWO FCS opponents

21. INDIANA has a chance to beat (2) OHIO STATE for the first time since Ronald Reagan was president

The longest streak among matchups on the 2022 schedule, the Hoosiers haven’t toppled the Buckeyes since 1988, dropping 26 straight since then. The nearest miss came 32 years ago, in 1990, when they managed a 27-27 tie in Bloomington.

The only other 20-plus win streak on the line in 2022 is Vanderbilt at Alabama. The Tide have won 22-straight vs. the Commodores, last falling in 1984 in Tuscaloosa.

22. (5) NOTRE DAME will play its first ever game vs. a Sun Belt member

Marshall joined the Sun Belt just in time to become Notre Dame’s first ever such opponent. The Thundering Herd beat a ranked foe as recently as 2020, scoring a 17-7 home victory over (23) Appalachian State. It hasn’t downed a Top 25 opponent on the road since upsetting (6) Kansas State 27-20 in 2003.

23. LOUISIANA and ULM play in September for only the second time since 1992

The Cajuns and Warhawks have battled for the Wooden Boot 25 times over the last three decades with 18 of the meetings – or 72 percent – falling in November or December. That leaves six contests that were played in October and only one, in 2017, that kicked-off in September. It makes this year’s fixture – slated for Saturday, Sept. 24th in Monroe – a rare opportunity for the in-state rivals to clash early in the season.

24. ARMY, (3) GEORGIA, NAVY, and (5) NOTRE DAME are the only teams that have TWO neutral games scheduled

25. AKRON and (15) MICHIGAN STATE will play for the first time in over a century

The most long-awaited reunion in 2022, the Zips and Spartans’ only previous football action came via two games in East Lansing in 1913-14, both blowout wins for Michigan State. For Akron, 1914 was the first year that the school when from being called Buchtel College (the name used since its inception in 1870) to the Municipal University of Akron (it dropped the “Municipal” in 1926). It was during his two seasons as the head coach at Buchtel (1893-94) that John Heisman is thought to have helped invent the center snap.

26. WESTERN KENTUCKY is the only team to play 11 straight games without a break

The Hilltoppers kickoff the 2022 season early with a Week Zero (Saturday, Aug. 27) visit from FCS Austin-Peay and then travel to Hawaii in Week 1. After a bye in Week 2, WKU will play 11-straight opponents – at Indiana, FIU, Troy, at UTSA, at Middle Tennessee, UAB, North Texas, at Charlotte, Rice, at Auburn, and at FAU – with no opportunity to pause, regroup, or recharge.

I sure hope The committee takes this scheduling into account when they release their rankings later in the season for Michigan and the other three teams if they get in sniffing range of the rankings.

Trust Five Conference Schools, each of them, have No shame. They care about the Media Paycheck they’re receiving.

The Wolverines are by far the biggest Name Brand with the Sports Media Industrial Complex “Journalists” ranking them in the preseason top 25 without Merit, only perceived popularity by the Sports Complex “Voters”. In 2022, their leftover Ranking from the 2021 playoff is Number 8.

It would be a merit based CFPA, LLC Rating which would take their NOT scheduling a Trust Five NON-conference Foe into Account.

The Hoosiers, Terrapins & Beavers are near bottom feeder, in the gutter, Trust Conference Club Members who have no national winning Aura, following or reach in football.
If, that’s a proven big IF, “they get in sniffing range of the rankings.” they won’t be ashamed if they are winning & In My Opinion, Hoosiers, Beavers, Terrapins shouldn’t be ashamed.

I’m rooting for those 3 to Win, MI / oHIo State to Lose & a NON Trust Five School to make the Corrosive Five Privilege Administration, LLC’s 4 team Invite (I’m Not holding my Breath tho.).

You missed Penn State at Auburn, will be the first time ever for a BIG 10 school to play at Auburn.