UConn Huskies to begin play as an FBS Independent in 2020 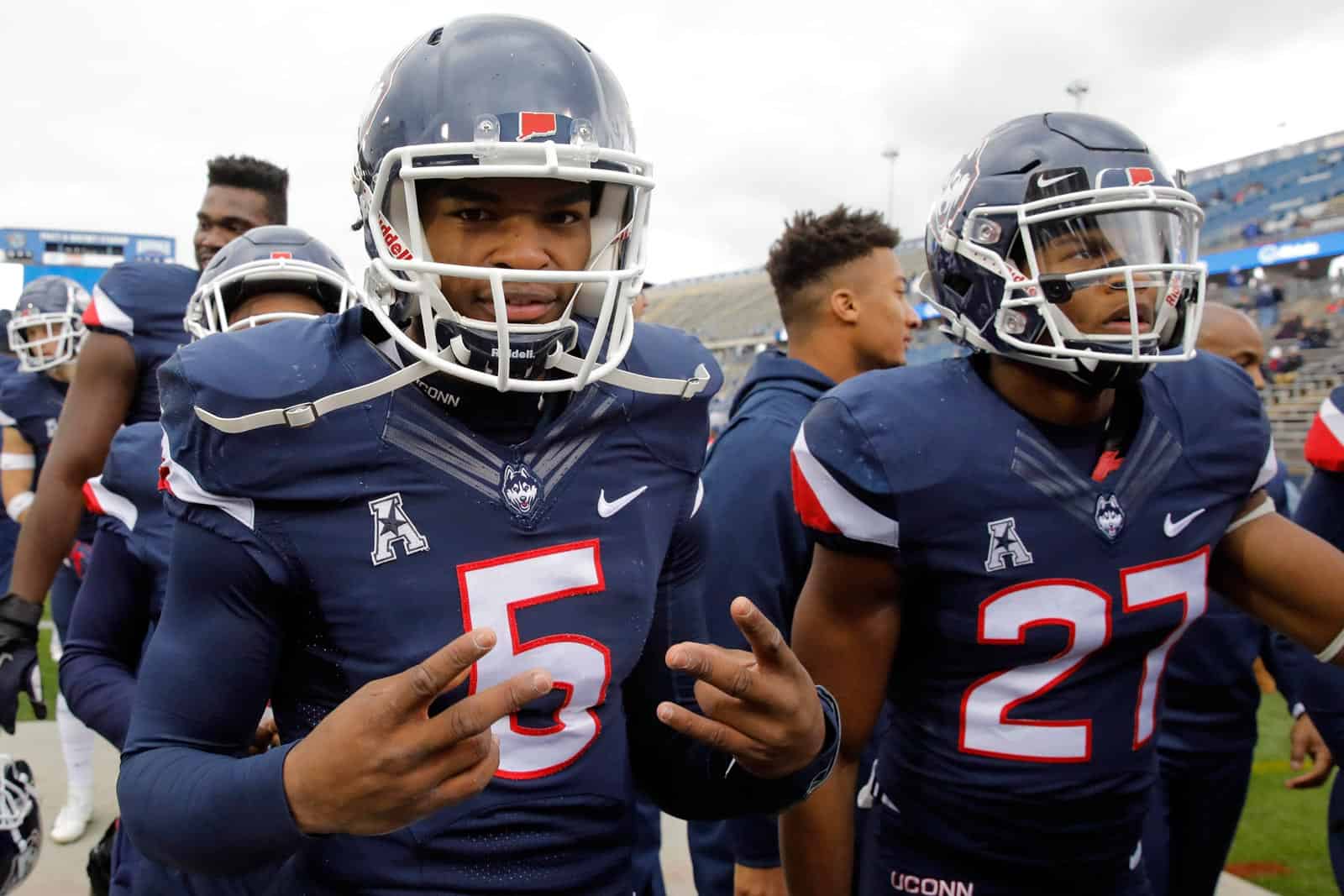 The University of Connecticut has made it official. The Huskies will begin play as an FBS Independent starting with the 2020 season.

The school released an announcement on Friday, making official something that had been strongly rumored and assumed ever since it became public knowledge that they planned to leave the American Athletic Conference.

UConn will move all sports except football, men’s and women’s ice hockey, and rowing to the Big East starting in 2020. The AAC was not willing to keep the Huskies on as a football only member, forcing the program to go the independent route.

The end of their membership in the AAC means that UConn athletics director David Benedict has a lot of work to do over the next 13 months filling out a football schedule that has just four games currently on it:

So just which schools should Benedict be on the phone with? Here’s a list of schools (excluding AAC programs) that still have holes remaining in their 2020 schedules:

Filling out their 2020 schedule, even with this many teams still having holes to fill, isn’t going to be easy.

The most difficult thing for UConn is going to be getting home games. Most of the teams with one opening in their non-conference schedules are already playing at least one game away from home and won’t be looking to add another. Also, many of those holes are likely to be filled with home games against FCS teams, if they aren’t already. That means going after teams with two spots left to fill would be smart.

The other issue is money. UConn’s athletic department has been running in the red at a deficit of more than $40 million. Throw in the $17 million fee to exit the ACC, and they’re going to be looking for some money games. Those will be harder to get from group of five programs who aren’t exactly rolling in the green either.

The first couple of seasons of independence are likely to be rough for UConn football and filled with travel. However, in the long-run, UConn will likely look to schedule more games against opponents closer to home, as opposed to playing conference opponents all the way in Oklahoma and Texas, making life a little easier on their football program.

You forgot a few things.

NMSU has the Hawaii exception, so a November 28th game is possible.

The Maine game will almost certainly be moved with one or two FCS opponents later in the year. USM is a logical opponent to host, as they are money starved and prefer more road games (Akron similar)

ULM and FIU are logical candidates for October games.

One serious possibility is Liberty moving it’s 2nd FCS game to another year (WCU) and hosting UConn on Nov 14 to start a series.

At this point it gets hard. Very likely a 2nd FCS game and a body bag game against one of those ACC or SEC schools to finish the schedule

They could also play some Mountain West schools that have the Hawaii Exception rule for a 13th game.

U Conn really want to go out West for a football game?

They can play where ever they want with the Hawaii Exception. They could play at U Conn if they wanted to.

Uconn played at Boise State last year and at BYU in 2015.

MW schools wouldn’t be top of the list but they may be willing if it’s the only option.

They could but a 13th game is rare, teams usually like to keep the off week.

They should just go the FCS route. I doubt they could compete for championships but they could probably be at least competetive at thay level.

If UConn football takes a dramatic turn upward after they become indie, I could see an ACC invite in their future (which would also mean that Cincy join too to keep an even # of football members).

I just like to know how UConn is 40 million in the red? I think each public university needs to release a expense report after every school year showing where the money went.

This is setting up to be a colossal failure. I hate it for Randy Edsell.

I find it funny how badly Connecticut had done in all sports (except women’s basketball) while in the AAC.

Mens basketball won a national championship while in the AAC.
Ollie was never able to get high level recruits besides Jallen Adam. I’m sure the AAC didn’t help at all.

Baseball made the NCAA tournament 4 times while in the AAC.

Football has been a disaster since Randy Edsel left in 2010.

What was the purpose of the originally BIG EAST split. I thought it was because the now AAC teams were football minded and the new BE teams were basketball minded. Now it seems both leagues are headed down the same road as to why they originally broke up. AAC has added a basketball school in Wichita State and BE has added a public school with a FBS football teams. I see this being a bad choice for UConn, they should’ve stuck it out a few more years until they got into the ACC.

MrVandy – if UConn football dramatically improves after leaving the American, I actually agree that the ACC will come calling for sure. I’ve been saying that UConn should be in the ACC for years. I’ve run into people who say UConn would be detrimental for football. I’ve offered rebuttals that realignment isn’t just about football, with Wichita State as one of many pieces of evidence of that.

And even in basketball, it’s not just about the guys either. Women’s basketball is just as big a moneymaker for a number of schools. At some, the women’s team has performed far better than the men’s over the years – such as Louisiana Tech and Old Dominion though I think the latter has declined in recent years.

And when the time comes that UConn does get accepted into the ACC, another school will likely join with them because there is no way that the ACC will get Notre Dame to put football in the conference. That other new member will likely be Cincinnati. They have a long history with Louisville in all sports, and are very familiar with ND, Pitt and Cuse to a lesser extent too.

Many traditional rivalries in the ACC have been affected by how they split their football divisions. They are the only non-geographic divisional setup in all of FBS. A clean geographic split could not occur until two more up north are added – like UConn and Cincy.

And when the next wave of realignment does come, chances are the ACC won’t be the only conference making moves. A good chunk of the American’s membership are all candidates to join the Big 12. They themselves could be poached by the SEC yet again. Oklahoma seems like a sure bet for the SEC, and who their partner in defection is would likely be Oklahoma State. I know many would rather have Texas in the SEC, but there are two key problems with that. 1 – A&M will certainly block the Longhorns. 2 – Oklahoma politicians will likely want to keep the big state schools together even if not in the Big 12. But unlike other conference rivalries disrupted by realignment, I see OU-Texas continuing as a non-conference contest each year because it is a major part of the Texas State Fair celebrations. That means both schools would have to defer some OOC contracts and cancel others altogether.

The ACC didn’t offer an invitation to UCONN in the past, so in the world would they off one now? Wake up.

They should just go all-out on the money/body bag games to help their budget.

With that schedule they will have another $40 million in medical bills.

BYU has a history of giving a helping hand to new indys. They have scheduled UMass and Liberty after they went Indy, giving both home games to boot. I expect BYU to make UConn a regular opponent going forward and would not be surprised to see BYU move some games around to help UConn in 2020 and 2021. Here’s how it could work.

2021 is trickier because ideally BYU would want a home game out of this after the trip in 2020 and the home games are either rivals, P5, AAC (USF), or FCS. But the one that sticks out as the most likely is Virginia. Bronco Mendenhall has been pretty open about not actually wanting to play his former team while he is at UVa. The series has already been pushed and amended multiple times since he took the job. This would give him to opportunity to cancel or reschedule out to like 2027. That agreement (https://fbschedules.com/byu-virginia-add-one-game-changes-future-series/) was always a little strange and heavily favored toward BYU. I would not be surprised if one of those 2 homes games in the agreement got wiped off and BYU waived the cancellation penalty. UVa would then travel to UConn instead of BYU on 10/30 and then UConn would come out to BYU on what was BYU’s BYE on 11/6.

Do you honestly thing BYU does that out of the goodness of their heart? They have schedules to make too, and teams like UMass and Liberty should be penciled in as fairly easy W’s.

It is a fascinating scenario you have thought of how it could work. But BYU went independent in order to avoid having to lift up a bunch of lesser teams. Sure maybe BYU does a favor now and then, but I doubt BYU would do something so drastic that makes things worse for its own fans in order to give some help to a school in an opposite corner of the country. Trading a home game for Virginia with a game for UConn is a big downgrade for its own fans.

SMU and UCF from the AAC also have open dates

UCF has two home games though, so they could start a 1-for-1 series on the road

What is the attraction of scheduling UConn? They are a complete dumpster fire, have zero appeal to any P5 team unless they want an easy W. They do not travel at all, let alone fill their own stadium

Good catch, but also have to guess that SMU and UCF will not be looking to schedule and do favors for a team that is bailing on their conference.

Maybe in exchange for a non-conference basketball game.

I am not convinced that U Conn is going to get that much benefit from reduced travel. They were scheduled to play 1 game per year in Texas or Oklahoma as members of the American. If they end up scheduling away games against BYU, New Mexico St or any of the Mountain or Big XII schools they will travel as far or farther. Perhaps, 3-5 years down the road, they can limit their travel, but I’m not sure that I would go all-in on that bet.
I wish them good luck, but I’m skeptical about their future.

I bet Arkansas will play them….they’re always looking for cupcakes.