The toughest and easiest 2019 college football schedule by conference 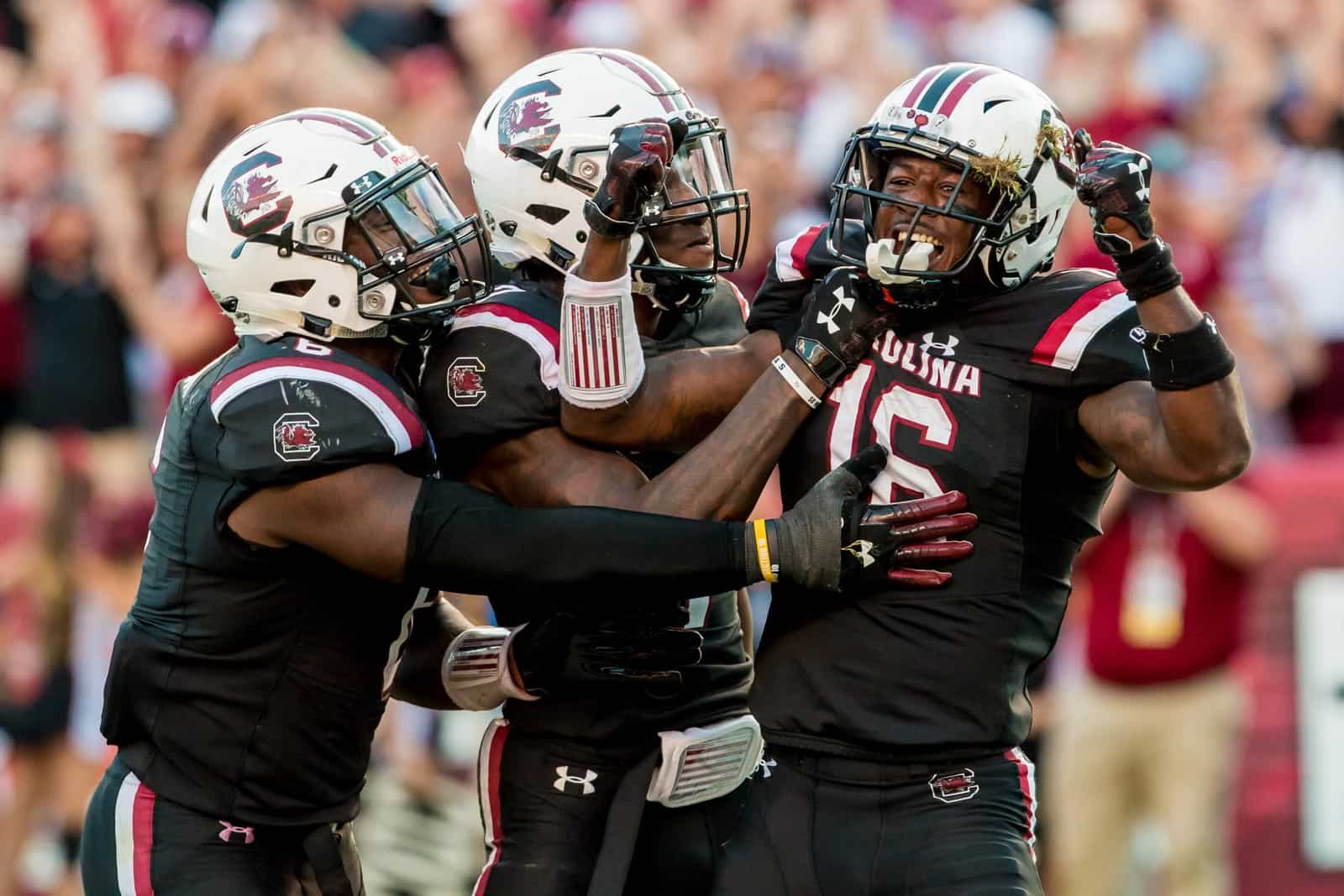 One of the most anticipated annual events at my home is the arrival of Phil Steele’s College Football Preview magazine.

Included in its bold, front-cover claim to be “Jampacked with Information” is a comprehensive analysis of the toughest schedules in a given season. Steele’s method goes way beyond the NCAA’s practice of rating schedule strength on a given opponent’s win/loss record from the previous season. Instead, he also utilizes his own power rankings to gauge how tough each foe will be to play this year.

Here’s a look at the top and bottom schedules for 2019 in each of the ten FBS leagues. These comparisons are far more than preseason “fluff”, instead indicating which programs will have the stiffest and easiest tests to reach the postseason.

Louisville kicks off the season with a visit from Notre Dame and ends it with a road trip to Kentucky, which finished last season at No. 12 in the AP. Though it gets Clemson at home, it visits both Florida State and Miami Fla. – which it draws as its rotating opponent from the Coastal.

According to Steele’s rankings, Virginia Tech has the easiest schedule of any Power 5 member. It’s ranked between San Jose State at No. 85 and Southern Miss at No. 87. Though the Hokies do play a road date at Notre Dame, the remainder of their non-ACC slate consists of Old Dominion, FCS Furman and FCS Rhode Island. From the Atlantic, they draw Wake Forest as their rotating cross-division opponent, avoiding Clemson and Florida State.

Cincinnati’s schedule is rated the most difficult of any Group of 5 member, coming in between Utah at No. 55 and Oklahoma State at No. 57. The Bearcats open with back-to-back games vs. UCLA and at Ohio State and draw Houston and Memphis from the AAC West. They don’t play an FCS opponent in 2019.

East Carolina opens with a roadie at NC State but the balance of their non-conference slate (like Virginia Tech) consists of Old Dominion and a pair of FCS foes (Gardner-Webb and William & Mary). In cross-division play, it does visit Navy but that’s softened with a road date at SMU and a visit from Tulsa. ECU’s 2020 schedule was weakened considerably when Virginia Tech canceled their trip to Greenville, a contest that was later replaced with William & Mary.

Michigan hosts Notre Dame, Middle Tennessee and Army in non-Big Ten play – three programs that combined for a 31-9 record last season. From the East they draw Wisconsin (on the road), Iowa and Illinois. The Wolverines haven’t won in Madison since 2001 and haven’t beaten the Hawkeyes since 2012. They won’t play an FCS opponent in 2019.

Nebraska’s slate is rated one slot easier than Utah State at No. 58. The Huskers open the season at home against South Alabama, play at Colorado, and then host NIU to conclude non-conference action. In Big Ten play, Nebraska gets Ohio State, Wisconsin, and Iowa at home and avoids Penn State, Michigan, and Michigan State.

West Virginia has back-to-back dates at Missouri and vs. NC State outside of non-conference play, making it the only Big 12 member to double up on Power foes. It also gets Oklahoma on the road (it hasn’t won a game in Norman since 1982). Baylor, Kansas State and TCU are also away opponents.

Like Nebraska, Baylor won’t play a single Power foe outside of conference play, opening with home games vs. FCS Stephen F. Austin and UTSA and then visiting Rice. Additionally, it gets Texas, Oklahoma and West Virginia at home in Waco. Steele has the Bears’ slate just one notch more difficult than Rice’s at No. 63.

Rice’s schedule is sandwiched in the rankings between fellow Texas programs Baylor (No. 62) and Houston (No. 64). The Owls open the season with an absolute Murder’s Row starting with a road trip to Army (the Black Knights finished 11-2 in 2018) followed by consecutive visits from Wake Forest, Texas (at NRG Stadium) and Baylor. From across the league in the C-USA East they draw Middle Tennessee and Marshall, the top two finishers from a year ago.

According to Steele, UAB has the easiest 2019 schedule of any FBS program. While the Blazers do have a roadie at Tennessee, they more than make up for that with non-league games vs. FCS Alabama State, at Akron and vs. South Alabama. In a complete opposite scenario as opposed to Rice, they draw Western Kentucky and Old Dominion from the West division, the two bottom squads from 2018.

The Redhawks’ 2019 slate is ranked right alongside Virginia’s (No. 75) and South Florida’s (No. 77). They open the season at Iowa, visit Cincinnati for its annual rivalry game during Week 3 (they’ve lost 13 -straight to the Bearcats) and then visit Ohio State the next weekend. From the MAC-West they draw a roadie at Northern Illinois, which won the conference in 2019.

Only three teams in the FBS have a schedule rated easier than Ohio’s. The Bobcats do visit Pitt in non-MAC play but also have FCS Rhode Island, Marshall and Louisiana. From the across the MAC in the West they host Northern Illinois but meter that with games at Ball State (4-8 in 2018) and Western Michigan (7-6).

Utah State has the second-most-difficult slate among Group of 5 members. Its non-MWC schedule isn’t consecutive but it is scary: at Wake Forest (Aug. 30), at LSU (Oct. 5) and vs. BYU (Nov. 2). It also draws San Diego State and Fresno State from the West – the two teams Steele has predicted to tie for first in the divisional race on the other side of the conference.

Fresno State does have back-to-back games at USC and vs. Minnesota to open the season but tempers that challenge with FCS Sacramento State and New Mexico State in Weeks 3 and 4. It does draw Utah State and Air Force from the Mountain division but avoids playing Boise State.

Though USC plays at Notre Dame, at BYU and vs. Fresno State (the 2018 MWC champion) out of Pac-12 play, the real challenge comes from across the league in the North. The Trojans draw Stanford, Washington and Oregon, the entire top half of the division. The only saving grace is a road trip to Cal. Compare that to fellow South program Arizona State which gets Oregon, Oregon State, Cal and Washington State. The Trojans are also one of only four Pac-12 members who won’t play an FCS opponent in 2019.

Washington State is the only Pac-12 program without a Power foe in non-conference play. Instead they get New Mexico State, Northern Colorado and Houston. From the South, they draw UCLA, Utah, Arizona State and Colorado, avoiding USC all together.

According to Steele, South Carolina has the toughest schedule in all the land. The Gamecocks double up on non-SEC Power foes with a neutral date with North Carolina and a visit from Clemson. From the West they draw Alabama to go along with their standing date with Texas A&M. They also get Georgia on the road. There is every chance that they will play the No. 1 and No. 2 (and perhaps No. 3) ranked teams in 2019.

Outside of SEC play Kentucky hosts Louisville (a team that went 2-10 last year and Steele predicts will finish last in the ACC-Atlantic) and has home dates vs. Toledo, Eastern Michigan and FCS UT-Martin. It draws Arkansas as its rotating opponent from the West, also Steele’s prediction for the cellar dweller.

Not only will South Alabama open its 2019 season at Nebraska, it welcomes Memphis (which won the AAC-West last season and is predicted to repeat) and visits UAB (the reigning C-USA champ and expected to vie for another title). From the Sun Belt-East, the Jaguars draw App State, Troy, Georgia Southern and Georgia State – also Steele’s top four teams in that division.

Appalachian State’s bid to claim its third-consecutive Sun Belt title will be less arduous with the second-easiest schedule in the entire FBS. While the Mountaineers do get roadies at North Carolina and South Carolina, they also draw Texas State and South Alabama from the West, the two teams predicted to finish at the bottom of the division.

They of for another FCS at home instead of traveling to ECU, as promised.

“ECU’s 2020 schedule was weakened considerably when Virginia Tech canceled their trip to Greenville, a contest that was later replaced with William & Mary.”

THANK YOU for including this sentence. Virginia Tech really should be publicly shamed for this debacle.

Why does Florida State still get listed in articles about ACC schedules like their some Top 10 national power? Until they get it done on the field, please stop referring to them as being tougher than Wake Forest or Duke.

Well, Florida State is still head and shoulders above Wake Forest and Duke in terms of athletics funding, auxiliary support, recruiting… and *should* be a top power. They’re going through the same phase Alabama did before Saban arrived.

“Like Nebraska, Baylor won’t play a single Power foe outside of conference play” — Nebraska plays Colorado this year, I know they aren’t that good but that’s a Power 5 opponent.

Texas A&M has a tougher schedule than South Carolina. Toughest in the country.

Guessing they also considered UTSA, Lamar and Texas State vs. UNC, App State and Charleston Southern. Plus three true road games in conference vs. four. It’s splitting hairs but those probably outweigh getting Bama at home vs. away.

The OOC schedules for this season are atrocious (looking at you Big 10).