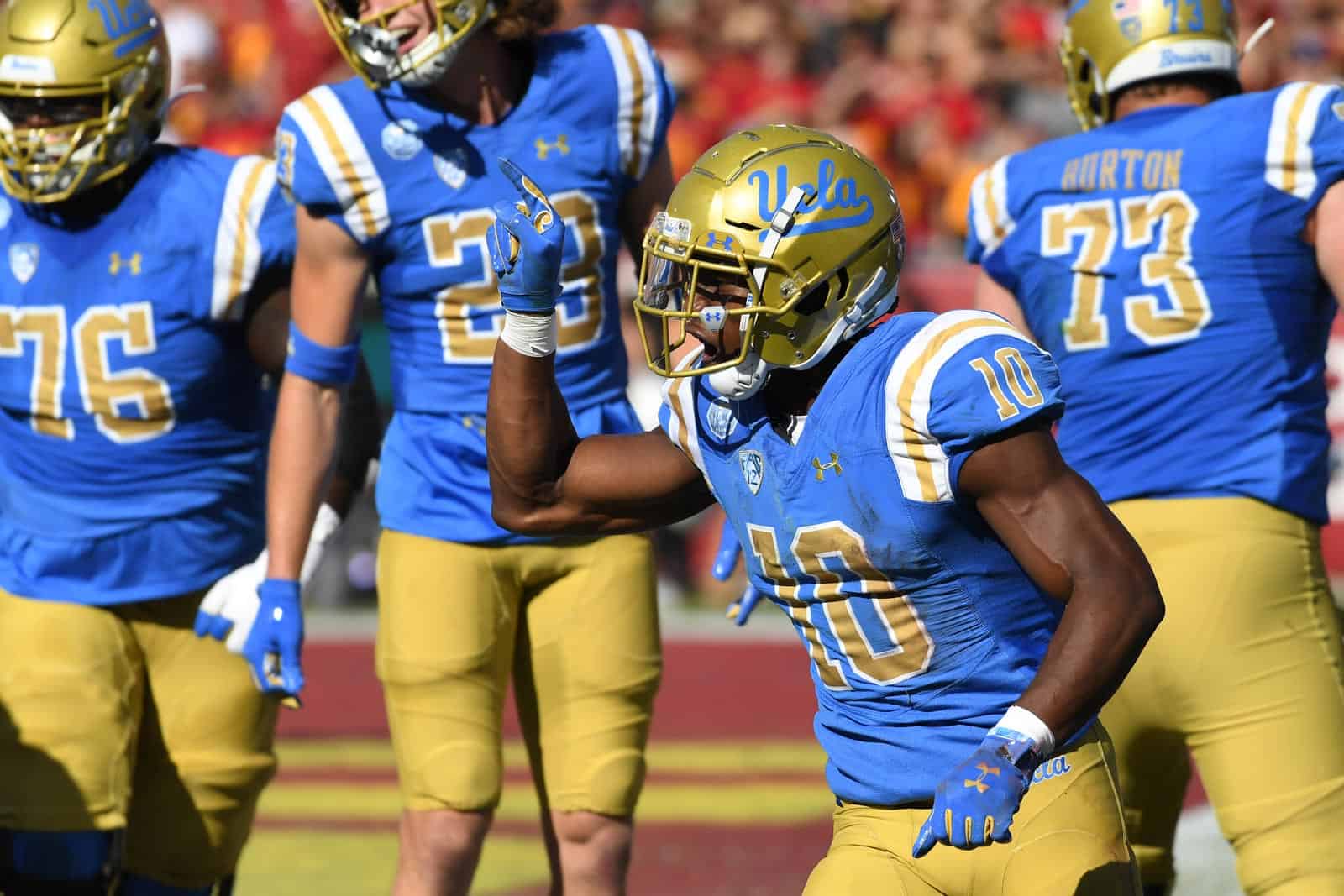 Of the 64 members of a Power 5 conference, only six won’t play a Power foe in non-league play this season.

It amounts to a one game advantage vs. the rest of the field.

By conference, four members of the Big Ten make the naughty list while two hail from the Pac-12. This means that the ACC, Big 12 and SEC aren’t represented.

As they are unilaterally accepted as so, we’re counting Notre Dame and BYU as Power foes. What’s tricky is the Big Ten – which dominates our list – which has declared, on its own, that Air Force, Army, Cincinnati, and UConn also count as Power opponents.

And, it just so happens that three of the four Big Ten teams mentioned are playing one of these “exception” programs.

While this cherry-picking of supposed “Power grade” teams is legislated by the Big Ten, and therefore a legal practice, it sparks major inequality in comparing schedule strength.

It amounts to claiming that Illinois – which can technically claim UConn as its Power non-conference foe in 2020 – is playing the same caliber opponent as Wisconsin, which plays Notre Dame. The same applies in comparing the Illini’s non-league slate with Ole Miss, which opens with Baylor in Houston.

In the name of comparative fairness, we’ve opted, in this exercise, to only count members of the ACC, Big Ten, Big 12, Pac-12 and SEC plus BYU and Notre Dame as “Power” opponents.

The Illini haven’t played a Power 5 member in non-conference play since 2016 when they hosted North Carolina and fell 48-23. That makes 2020 their fourth consecutive season without such an opponent. Their last win over a regular season non-Big Ten, Power 5 foe came in 2011, a 17-14 victory vs. then (22) Arizona State.

The only non-conference Power 5 opponent currently in the Hoosiers’ future is Louisville, which is on the schedule in 2023, 2024 and 2025.

Moving forward, Nebraska has a Power opponent scheduled each season through 2035 apart from 2025 (Akron, at Cincinnati, ULM).

This is the first year since 2006 that Northwestern has failed to schedule at least one Power foe out of Big Ten action. That team won games at Miami Ohio and Eastern Michigan but fell 34-17 to FCS New Hampshire on its way to a 4-8 finish.

Looking ahead, the Wildcats have a non-conference Power opponent slated for every season from 2021-24 (a three-game series with Duke) and 2026-27 (a home-and-home vs. Colorado).

This is the first time that UCLA hasn’t had a current Power 5 foe (including Notre Dame and BYU) on its regular-season slate since the end of World War II. The year was 1945 and the Bruins had San Diego Navy, Pacific, St. Mary’s Pre-Flight and St. Mary’s (Ca.) in non-league play.

A repeat offender, Washington State hasn’t played a non-conference Power opponent since 2015 when it traveled to Rutgers and won 37-34. Its last such defeat came the year before, in 2014, when it opened with a 41-38 loss to the Scarlet Knights in Seattle.

The Cougars host BYU next season and have Wisconsin slated in 2022/23. They also have a pair of home-and-homes booked with both Kansas and Kansas State from 2026-29.

Including BYU is complete idiocy…why choose a midddling non power 5 program and grant them special status over many other far better programs. Why not App.St or Boise or Memphis or Houston or Nevada or Utah St. or Cincy or more?

completely agree and I am so tired of so called writers who insist of this division of college football.
The only division between “power” and “group” is that ESPN controls the rights to the bigger conferences and wants to hype those schools for ad revenues during its broadcasts,thats it.

Anyone who thinks the lower dregs of the bigger conferences are so much better then the “group of 5” schools is ignorant about the sport. It isn’t talent that seperates these schools,its ESPN money and unequal scheduling. You put teams like Virginia,Kentucky and Indiana on the road against American,Mountain West and MAC schools on a regular basis and see what happens…..watch the playing field become a lot more even. I have said this so many times but its true,ESPN has ruined college football.

Because the Power 5 conferences agree that BYU counts as a P5 for scheduling. Take it up with them.

The list of seven programs that are “far better” than BYU seems like a stretch based on performance. I agree on Boise State. Memphis, Houston and Cincinnati are comparable programs to BYU. App State, Utah State and Nevada are lesser programs than BYU.

Consider also that BYU has strong history and facilities and has a national TV network. These are appealing attributes to conferences that want to have games on TV.

My guess is because non of those teams you mentioned has a 60k seat stadium, along with a National championship, Heisman Trophy and an ESPN contract. other than that though, they are all very nice teams.

You’re being way too unforgiving as far as UCLA and Wazzu go. And Cincy deserves their unique classification. I know you drink at the water fountain of all things Power Five but lemonade and iced tea are worth sampling too

Amy, I nominate you to tell San Diego Navy that they were a tomato can back in the day. I’ll bet they were bona fide Power 5 material in 1945. The Japanese can probably confirm.

Worth noting that the PAC-12 and Big Ten also play 9-game conference schedules, whereas the SEC and ACC only play 8. That extra game – half the time on the road – makes up somewhat for scheduling UConn as your “premiere” non-conference tilt.

Yeah the statement “It amounts to a one game advantage vs. the rest of the field.” seems bizarre when two of the Power 5 conferences have an automatic advantage of having one fewer Power 5 game built in just by having fewer conference games.

The most sensible way to compare schedules is to count the total number of Power 5 opponents on season schedule. It doesn’t matter if they are conference or non-conference games.

The Big 12 plays a 9 game conference slate and none of their members made this list anyway this year.

UCLA was supposed to play Rutgers in 2020 (Rose Bowl) and 2021 but Rutgers bought out of the series. The same is true in 2022-23, when UCLA had a series schedule with Michigan but the Wolverines terminated the series.

Illinois, Indiana and Nebraska scheduled UConn and Cincinnati back when the Big East was a BCS qualifier.

Northwestern coach Pat Fitzgerald has long whined about the SEC’s weak non-conference schedules, but with four Big Ten schools, Northwestern among them, not playing a Power 5 opponent in 2020 (and with Northwestern playing weak-kneed, low-end Division 2 Morgan State), Fitzgerald no longer has an argument.