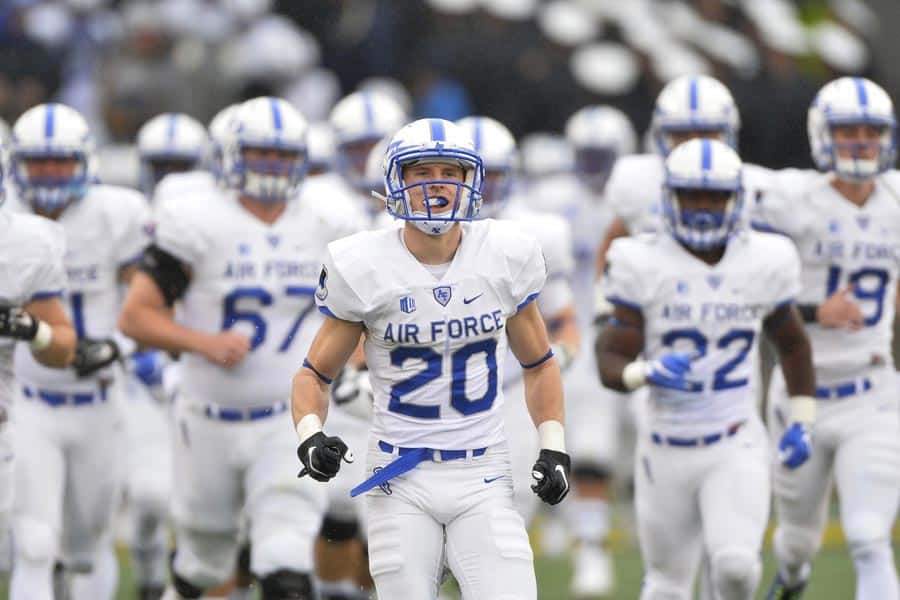 Last month, it was learned that the Big Ten Conference approved four teams that would count as Power Five opponents for scheduling purposes — Army, Cincinnati, Navy, and UConn.

Those four teams joined BYU and Notre Dame, as well as the 64 teams in power conferences, as acceptable opponents for their strength of schedule mandate.

Today ESPN reported another addition to the list of teams deemed acceptable to play by the Big Ten — the Air Force Falcons.

Air Force will count as Big Ten Power 5 opponent requirement. It was previously reported that Army and Navy would also fulfill obligation.

Air Force is 36-32 over the past five seasons, including 2-2 this season. The Falcons have played in a postseason bowl game in seven of the last eight seasons.

Michigan is scheduled to host Air Force in 2017, but the Wolverines also open that season against Florida in Arlington. So it’s likely that another school made the request to have Air Force included.

“If someone comes to us with a request, we’ll evaluate it,” Rudner said.

Here’s an updated look at who each conference can schedule, per reports:

The Big Ten is evidently going to cherry-pick who their members can play and have it count as a Power 5 opponent. Beyond ridiculous.

At this rate any conference can just declare a team counts and that is the end of it. if the Big Ten says Central Michigan counts as a power 5 then it is ok.

The 2009 team certainly would fit

The 2009 Central Michigan squad lost 2 of its 3 biggest games. No way should they have counted as a P5 opponent.

If we’re going to start counting Air Force, can we stop counting Kansas?

Bowling Green of Ohio should be added too. They are 2-0 against Big 10 this year and were 1-1 last year.

If you’re going to count AF you might as well count Boise State as well.

Boise should have been considered over Air Force

I don’t think the Big Ten wants any part of Boise State! Who in the Big Ten would risk scheduling them? (Other than Northwestern, maybe).

Get a clue before saying ignorant things. Mich St played and beat Boise a few years back. They have Boise in the future schedule. Stop embarrassing yourself.

I know, it should be Boise State instead of Air Force. It’s just another excuse to schedule another guarantee game

The BB1G needs to close the loopholes in the P5 requirement. Or at the very least say they will not consider requests starting with the 2020 season for an exception.

This is typical exception creep

I understand cinci, navy, and air force to a degree. But Ucan’t and Army? Those teams are usually competitive every 10 years. BGSU and NIU make more sense.

Not coincidentally, UConn and Army are among the top TV ratings-getters outside the P5 – along with Navy, BYU, Cincinnati,…and Air Force. The others among the top in TV ratings not yet included are Boise St., Fresno St., USF, and Houston.

The service academies will get counted because of their prestige, BYU, Cincinnati & UConn are pretty the give-in’s for conference realignment to move up to a Power 5 Conference in the future. Notre Dame is Notre Dame. I don’t see the problem with this, now if they start counting other teams that shouldn’t, I’ll have a problem with it. At that point just add The American & Mountain West to the P5 requirement, the other 3 conferences don’t really belong.

As they’re finding out…. force your teams to play 9 conference games, ban FCS, and there aren’t enough schedule openings left among P5’s to fulfill the requirement. Just go to 10 conference games, B1G, and live up to your name: “Big Ten”, as in ten conference games. I mean frankly, should Maryland and Rutgers even count as P5? At least Indiana looks like it’s that once in a 19 year shades of goodness again. The Wake Forest-UNC non-conference game shows it can’t hurt now in a 14-team conference to do this.

There are plenty of scheduling opportunities, you just have to do it in advance if you want quality OOC’s. The exceptions are coming from the bottom programs..the cincy, uconn, were all about Indiana. I bet Indiana asked for the AF exception too, they will probably be announcing a game soon. The top programs who expect to compete for conf champs and CFP will continue to schedule real P5’s, The bottom programs want exceptions b/c the 9 games con schedule means they are likely getting another loss most of the time and they don’t have the easy FCS games either.

If you are a power five you are if your not your not. If you are going to accept some one from another conference the entire conference should be excepted. This has become a big ten joke to rest of the country. Just play who you want and let the almighty committee decide who should be in. This worse than the BCS. Keep the playoff and revert back to the BCS way of selecting the teams. At least you had a nonbiased computer model for selection of the teams. Better yet go to a sixteen team playoff like other divisions decided by the BCS method.

They should make it less arbitrary. Just take the military schools, BYU, and teams that have been to BCS/CFP games.

Everyone would want to schedule Hawaii out of those schools

Not the case. The B1G is fulfilling requests on a team-by-team basis. It’s likely nobody has tried to schedule Boise State and therefore hasn’t asked for an exemption.

It’s just smoke and mirrors. When the mandate was originally announced the B1G was well aware some of their programs would not be able to fulfill the P5 OOC mandate and would require exceptions. Its nothing more than conference marketing. Delaney just rubber stamps criteria adjustments for these P5 exceptions whenever a B1G bottom dweller has issues filling a square peg into a round hole on their schedule.

It appears Air Force was added to the ‘p5 waiver list’ at request of Purdue for 2019. Or was it Minnesota?

Did Minnesota request/acquire a waiver for ‘Fresno St’ for 2018-19?

Not sure why B1G included Navy in the exception list. Navy’s OOC schedule is always full with ND/AF/Army and a FCS program.

The need for the exceptions should (in theory) diminish as programs get their schedules done in advance. Although it appears Indiana will like be taking advantage of the exceptions ongoing. Sorry Hoosier fans.

Indiana was the IU national football champion this year. They beat SIU in week one and FIU in week two, and are only two wins away from bowl eligibility (any two of Rutgers, Maryland or Purdue). Hoosier fans haven’t had this much to cheer for in September since…well, I can’t remember when.

I think this exceptional waiver list of P5 opponents is really dumb. As of now, 65 teams (half of the FBS; including Notre Dame since they are partially ACC, scheduling 10 ACC teams every 2 years) is considered Power 5 teams. As of the FBS teams of 2016 (if Coastal Carolina joins the Sun Belt), Power 5 teams has near 230 OOC spots and Group 5 teams has near 260 OOC spots, excluding rival games. If a team wants to schedule a P5 opponent, they know who those teams are. Don’t make excuses because you want to keep a rivalry going with a non-P5 team. If that’s the case, go INDEPENDENT.

Not sure why people are having a hard time with this. Notre Dame has always been included in the Power 5. BYU, Connecticut, and Cincinnati are the most frequently mentioned teams to the next in line to join the Power 5. Army, Navy, and Air Force are service academies and every conference should encourage their teams to play these three.

Remember, Power 5 does not necessarily mean the best teams in the country (see Vanderbilt, Kansas, Duke, etc.). To be Power 5 there is a list of factors the P5 conferences look at when inviting schools to become members, such as geography, football strength, overall sports strength, history, brand quality, academic rankings, endowments, grad schools, among other things. This is why BYU, Connecticut, and Cincinnati ARE included and the likes of Boise St. are NOT included.