The Hawaii Exemption, Week Zero, and the 2019 college football schedule 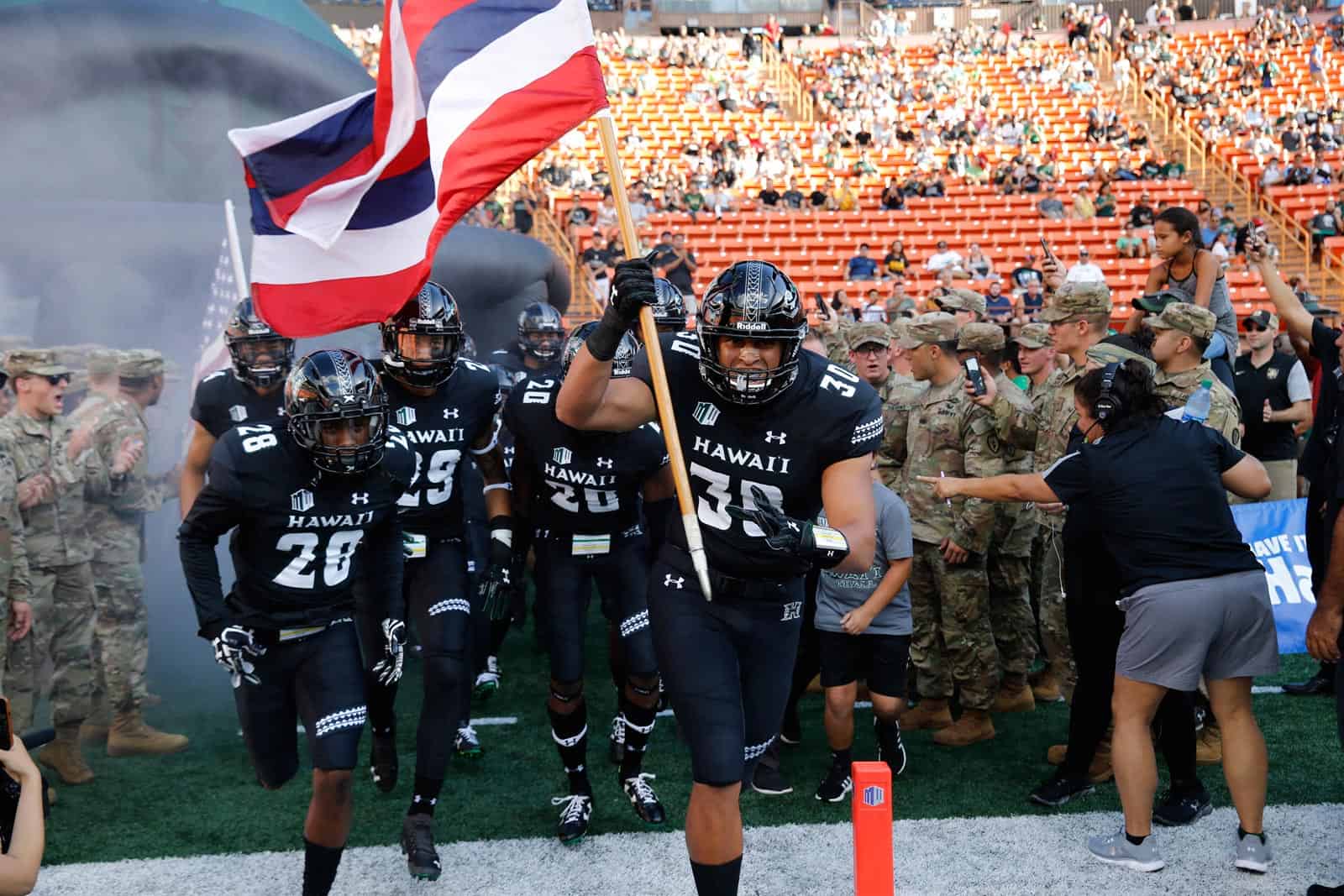 Located approximately 2,390 miles from California, the State of Hawaii makes for a long trip for college football teams heading for Honolulu.

It also results in thousands of frequent flyer miles for the Hawaii Rainbow Warriors. They have to travel to the mainland for four Mountain West Conference contests in addition to one or more non-conference games they have scheduled each season.

Fortunately, the NCAA has a rule that helps offset the travel costs to and from Hawaii. Football Bowl Subdivision (FBS) teams can play a maximum of 12 regular-season games each year, per Bylaw 17.10.5.1. However, Bylaw 17.28.2, commonly referred to as the Hawaii Exemption, permits teams located in Alaska and Hawaii to exceed, by one, the maximum number of contests permitted under Bylaw 17.10.5.1.

This extra game enables Hawaii, and teams that play at Hawaii, to add additional revenue to their coffers, whether that is in the form of a road game with a guarantee or a home contest with all the revenue benefits it entails.

For the 2019 college football season, only Hawaii and one of their eight home opponents will take advantage of the Hawaii Exemption. Below are the details:

For the second consecutive season, the Hawaii Rainbow Warriors will play a 13-game regular-season schedule. Hawaii will play non-conference games at home against Arizona, Oregon State, Central Arkansas, and Army and will travel to take on Washington.

Army will play a 13-game schedule for the first time since the 2003 season when the Black Knights finished winless at 0-13. That included a 59-28 whipping at the hands of the Rainbow Warriors in Honolulu.

The Black Knights play at Hawaii on Saturday, Nov. 30, 2019 (early Sunday on the East Coast) and the game is strategically placed in between open dates on November 23 and December 7. The extra time off will help Army recuperate from travel of approximately 16,000 miles over 22+ hours, round-trip.

Seven opponents that travel to Hawaii this season declined to add a 13th game to their football schedule. Instead, they will retain an open date and most of the FBS schools have two this season due to the calendar.

In addition to the 13th game option, NCAA rules also provide another benefit to Hawaii and any team that plays Hawaii that season.

Under NCAA Bylaw 17.10.3, FBS and FCS teams cannot play their first contest until the Thursday preceding Labor Day. Beginning in 2016, an exception to this rule was added (Bylaw 17.10.3.1) that allows Hawaii and teams that play in Hawaii, plus their opponents, the option to play one week earlier on the Saturday before Labor Day weekend.

The Saturday before Labor Day has unofficially been dubbed “Week Zero” since it occurs prior to Week 1 when the majority of college football teams begin their season. This season, Hawaii hosts the Arizona Wildcats in Week Zero on Saturday, Aug. 24.

A second exception, Bylaw 17.10.3.2, also provides Football Championship Subdivision (FCS) schools the opportunity to play in Week Zero. In order to qualify, the contest must be a non-conference matchup that is nationally televised (broadcast or cable; not Internet only).

For the 2019 season, two FCS matchups meet that qualification and are scheduled for Week Zero. Villanova travels to take on Colgate (12:00pm ET, CBSSN), while Samford and Youngstown State will square off in the Guardian Credit Union FCS Kickoff at the Cramton Bowl in Montgomery, Alabama (3:00pm ET, ESPN).

A fourth matchup that is scheduled for Week Zero, Florida vs. Miami in Orlando, Florida, doesn’t meet the bylaw requirements mentioned above. This contest was moved up one week at the request of ESPN and had to be signed off on by the NCAA.

The game was moved primarily to provide a featured prime-time matchup to kick off the 150th season of college football. Florida and Miami will be featured on ESPN at 7:00pm ET.

Although some pundits and fans have a disdain for the term “Week Zero,” most probably welcome the return of college football one week earlier than normal.

Ask Bama how they liked playing Hawaii back in ‘03.