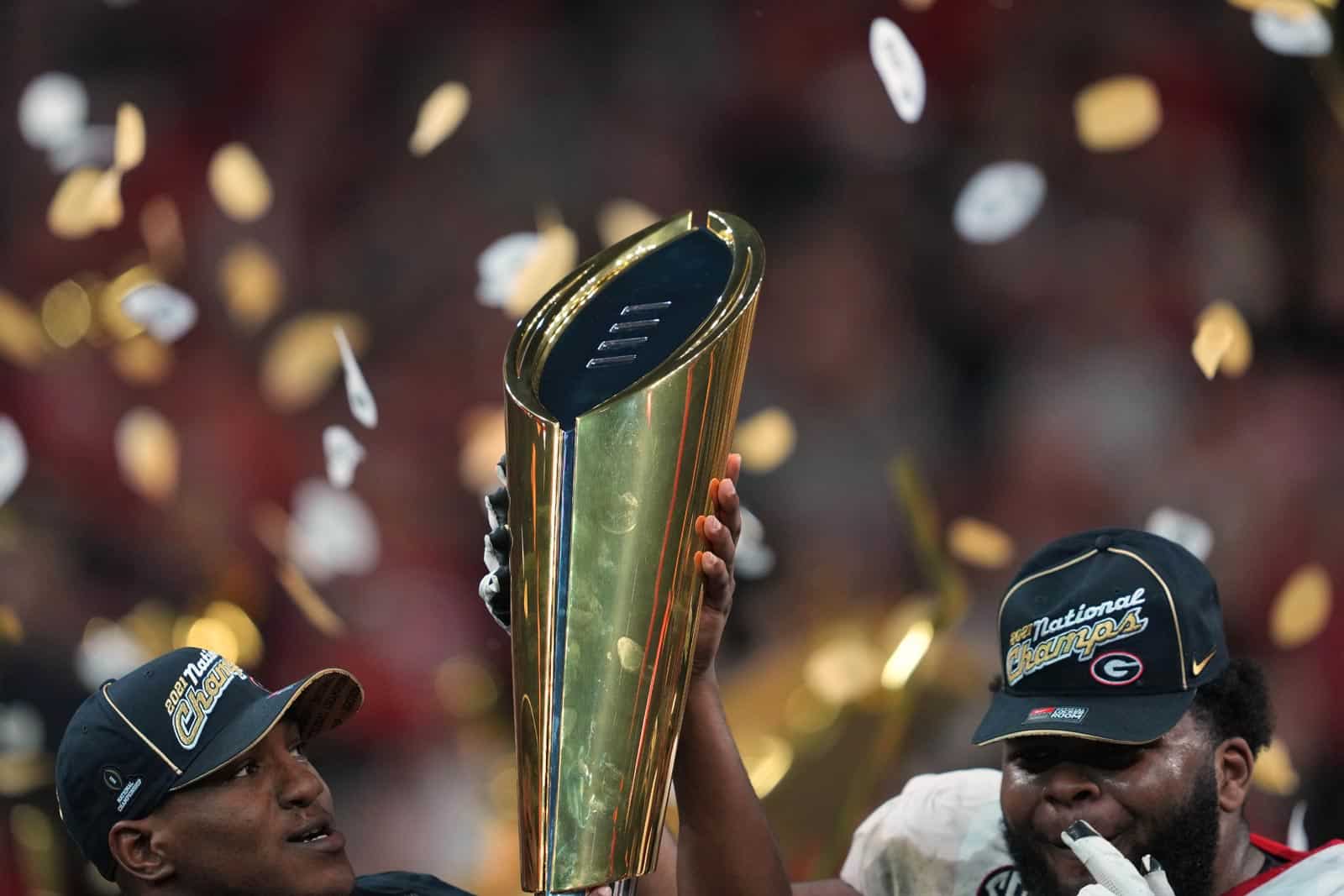 The college football bowl games for 2022-23 will be announced on Sunday, including the College Football Playoff and New Year’s Six selections and schedule.

Below we will live blog the bowl games and pairings as they are announced on Sunday. The College Football Playoff Semifinal pairings will be announced first at 12:15pm ET on ESPN.

Bowl games hosting the College Football Playoff Semifinals this season are the Chick-fil-A Peach Bowl at Mercedes-Benz Stadium in Atlanta, Ga., and the Vrbo Fiesta Bowl at State Farm Stadium in Glendale, Ariz. Both semifinal games will be played on New Year’s Eve, Saturday, Dec. 31, 2022.

This season’s College Football Playoff National Championship will be played at SoFi Stadium in Inglewood, Calif., on Monday, Jan. 9, 2023.

* Middle Tennessee and San Diego State will play in the EasyPost Hawai’i Bowl, which was initially reported by Brett McMurphy on Monday and later officially announced.

* The HomeTown Lenders Bahamas Bowl has announced their matchup, which will feature Miami (Ohio) taking on UAB.

* Cincinnati and Louisville will play in the Wasabi Fenway Bowl, according to a report by The Athletic.

* Tulane and USC will square off in the Goodyear Cotton Bowl Classic, per a report by Brett McMurphy.

* Clemson and Tennessee will do battle in the Capital One Orange Bowl, also from a McMurphy report.

It’s here, folks! The day we’ve waited for has arrived!

No, not the day Skip Bayless developed laryngitis, or the day pumpkin spice lattes arrived. We’ll have the College Football Playoff semifinalists in just a few minutes, and all of the bowl announcements as they happen. We’ll also have a bad joke or a hundred as the day progresses. Settle in and join us, won’t you?

12:14pm:  Liberty is stealing the headlines:

Why not? ESPN will still only have released the four playoff teams by then, and will have talked about them for nearly half the day.

12:17pm:  If you won’t take my word for it, listen to one of the most respected journalists of this generation:

ESPN burying the lead and the news. Paying some bills. Could be a 5-minute show.

12:31pm:  And now we listen to two hours of talk about those six teams. If the faithful readers of this feature and site want me to sit through 12 teams of this nonsense, I’m gonna need you to start firing up your CashApp a couple years early. I’ll have bowl announcements as/when they happen and some mostly-unserious insight as the day progresses.

12:39pm:  Kirby Smart tells ESPN that the conference doesn’t matter once you get into the Playoff, which is something you should file away for 2024 when it’s 9 SEC teams, the Big 10 champ, and the G5 team they invite to the little kids’ table.

12:44pm:  I think Jim Harbaugh just grabbed his hat out of a box — or maybe off a recruit’s commitment table — put a quick crease in it, then stood up for his ESPN hit. Don’t put sharp creases in hats, kids.

Sugar has Music City concurrent, Cotton has Citrus and ReliaQuest.

1:04pm:  Now’s the time when ESPN is bitten by its hubris, as TVs everywhere turn to the NFL. We still persevere here, though! Thanks for hanging out with us.

1:16pm:  Who’s in for the idea of a bowl draft? This honestly might be the best programming ESPN has ever produced.

Y'all, I would watch a bowl draft RIGHT NOW. This might be the best idea I've ever heard. https://t.co/Aq2lXL1X28

1:30pm:  McMurphy reports that Southern Miss and Rice will be the combatants in the LendingTree Bowl. That game will be played Saturday, Dec. 17, in Mobile.

1:34pm:  McMurphy again — and you should just assume that any early reports are from him — has BYU and SMU in the New Mexico Bowl. That game is also Saturday, Dec. 17.

1:44pm:  Houston and Louisiana will trek to the Independence Bowl in Shreveport. That game is set for 3:00 (Eastern) on Friday, Dec. 23.

1:47pm:  Fresno State-Washington State in the Los Angeles Bowl (no, I’m not saying the name of the comedian who put his name on it). Saturday, Dec. 17, for that one.

1:50pm:  Another really fun matchup in the New Orleans Bowl, as it’ll be South Alabama-Western Kentucky on Wednesday, Dec. 21.

1:52pm:  The Camellia Bowl welcomes Georgia Southern and Buffalo for a noon kick on Tuesday, Dec. 27.

1:57pm:  One week behind the Birmingham Bowl, you’ll see San Jose State and Eastern Michigan in the Famous Idaho Potato Bowl. Hope it snows a lot in Boise…

2:00pm:  Jim Mora Jr. completes his renovation project at UConn, as his Huskies are headed to the Myrtle Beach Bowl to take on Marshall. 2-for-1 hermit crabs for everybody!

2:03pm:  The Arizona Bowl has its teams, as it’ll be Ohio and Wyoming. I guess El Pres and Big Cat can start preparing their “expert” commentary for the Bobcats and Cowboys, who’ll do battle on Friday, Dec. 30.

2:12pm:  20-ish minute warning that ESPN will have the information we’ve known for several hours on its network at 2:30. You can break away from the NFL games to watch those three minutes of reveals, then hear the countless additional hours of babbling.

Sources: Toledo will play Liberty in the Boca Raton Bowl. This is UT's second appearance in the game. Rockets beat Temple in 2016 in the first game of the Jason Candle era.

2:26pm:  Not completely bowl-related, but there is other news on this Sunday:

2:29pm:  Wake-Mizzou in the Gasparilla. Interesting.

2:30pm:  Utah State-Memphis in the First Responder Bowl. McMurphy had the Aggies going to Boca to play Liberty, so I wonder what happened with those negotiations.

2:45pm:  LSU-Purdue in the Citrus, which is a nice little “brand-name” game, this year’s results notwithstanding.

2:47pm:  Florida-Oregon State in the Las Vegas Bowl. Interesting that Sin City gets the 14th-ranked Beavers. We’ll also get Pitt-UCLA in the Sun.

3:05pm: Let’s give a shoutout to one of the bowls and credit them with their announcement!

The Match Up is set!

.@DukeFOOTBALL will take on UCF in the Military Bowl in Annapolis, MD, on December 28th at 2 PM. Ya boys will be there and ready to party.

3:19pm:  Oregon will go to the Holiday Bowl, and will battle either UNC or Notre Dame. This Notre Dame-ACC unholy alliance is apparently complicating things a bit — stay tuned.

Air Force and Baylor will also play in the Armed Forces Bowl.

3:24pm:  Ole Miss will be the other half of the Texas Bowl. Red Raiders and Rebs? Start icing down the scoreboard now for the workout it will receive.

3:44pm:  Illinois will go to the ReliaQuest Bowl. Either Mississippi State or South Carolina will join them.

3:47pm:  Either Dave Doeren or Mike Locksley will get a mayo bath. NC State and Maryland will travel to Charlotte for the Duke’s Mayo Bowl.

* Kentucky-Iowa (again) in the Music City

* Notre Dame-South Carolina in the Gator

* UNC joins Oregon in the Holiday

* Mississippi State to the ReliaQuest against Illinois

3:51pm:  After Notre Dame held us up for a while, that’ll account for all of our matchups in the 2022 postseason. All of the bowl schedules, times, dates, and other stuff you’ll need can be found in the links above. Thanks for your continued support of the site and for hanging out with me for the tenth year of our doing this. Good luck to your favorite team, and I hope you’ll come say hi on Twitter!

To all of you, Merry Christmas, Happy Hanukkah, Happy New Year, and a joyous, peaceful time of any celebration and reflection you observe this December. Now, let’s end the talk and start the football!

because Appalachian State is 6-6, Them play two FCS School, By law them can’t go to a bowl game it the Rule that NCAA put in.
That why Rice going

That’s a bummer. They were forced to play two FCS since Marshall became a Sun Belt game and not OOC.

IS Clemson Google’s point a good point? That we should apply the rules that everybody has agreed AREN’T in effect for this year, and DON’T go into effect for 2 more years, to this year?

It’s at least a point that they’re only further diluting this thing by going to 12 teams.

Notre Dame needs to adopt a New Years Six or bust policy starting in 2023, at least until they finally win a major bowl.

I come by each year at this time for the helmet schedule to promote inter-office gambling. Thank you for all that you do.