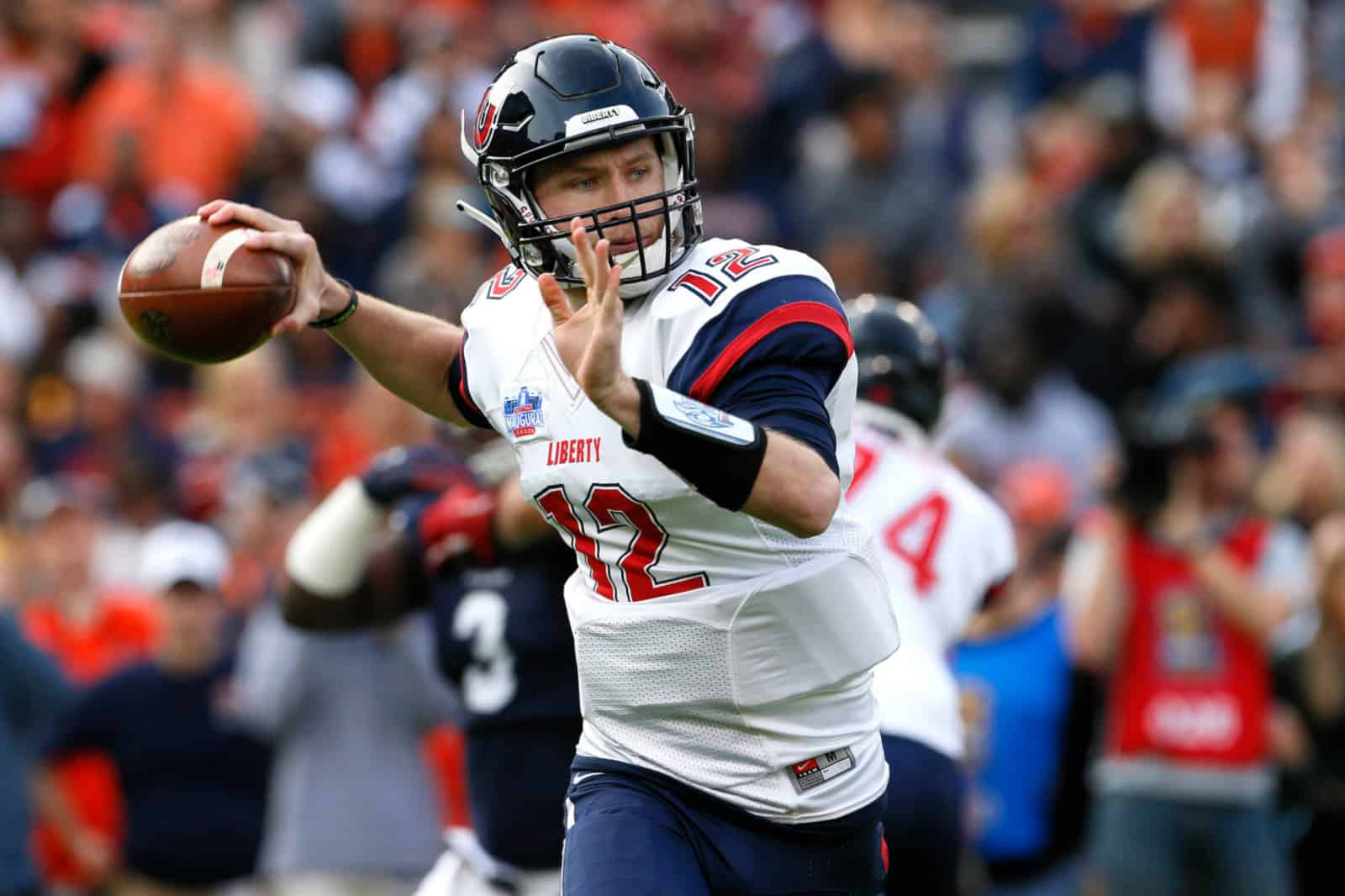 Because that’s the case, we’re shifting priorities just a bit here at CYS. I wanted to make things a little more special for year eight — and, quite frankly, breaking down three games in excruciating detail is a bit much, after a while, so here we are. We’ll take a little bit of a lighter look at the world of college football this year, and probably still give you some storylines to follow. One thing’s for sure, though — I won’t be picking games on a regular basis. College football is darn near impossible to predict, and I’m not trying to rip the gimmick of a dude who made his name by being told by a sports radio legend that he had to run.

Before we start, trivia is a thing around these parts, so let’s ask a question.

TRIVIA (answer at the end of the feature):  Liberty hosted three nationally-ranked teams in 1989, the first year of Williams Stadium’s existence. Who were those teams?

JARRIN’ JARREN:  Following a much-publicized offseason in which, among other things, he beat out transfer Tate Martell for the quarterback job, Miami signal-caller Jarren Williams had a pretty decent day — statistically, anyway — in the 24-20 takedown of the ‘Canes by Florida. Williams completed 19-of-29 throws for 214 yards and a score, but offensive coordinator Dan Enos looked past the stats in his evaluation. Boy, did he.

Enos opined quite a bit more on his redshirt freshman passer in remarks captured by the South Florida Sun-Sentinel, especially around Williams’ ability to avoid contact. Williams absorbed a blistering ten sacks from Florida’s vaunted defense, and Enos had thoughts on that, too:

“He’s just got to learn how to throw the ball away. He had very, very poor ball security, as well,” Enos said. “We had two fumbles where he doesn’t have two hands on the ball. One of them he should have thrown the ball away, and then the other time he’s got his check-down in the route wide open and doesn’t get to him and throw him the football and ends up holding it too long.”

To be fair, Miami must more effectively run the ball, as well. It carried just 22 times for 138 yards, outside of Williams’ sack yardage and attempts, and DeeJay Dallas managed just 45 yards on 11 carries outside of his 50-yard long that took him to the end zone.

Whatever the issues, Miami has a week to try to rectify them before hitting the road to Chapel Hill to open ACC play.

ARIZ-OH, NO:  Hawaii clipped Arizona Saturday night, providing an incredibly wild finish just hours into the season. Trailing 45-38, the Wildcats stood 31 yards away from tying the game with 10 seconds to play. Khalil Tate took the snap, scrambled, and locked eyes on the end zone. Tate gained five yards, then 10, then 20, then 30, then…

Khalil Tate comes up less than a yard short of a game-tying TD as time expires. @HawaiiFootball squeezes out the 45-38 victory. ?

WHAT A GAME! WHAT A START TO THE CFB SEASON!#CFBonCBS pic.twitter.com/yhXPySr4I4

Tate, whom some labeled a sleeper Heisman candidate just hours before that game began, tallied 469 total yards and three scores in the contest, but the home side compiled nearly 600 yards of offense on its own. The victory marked the fifth in a row for Mountain West sides over Pac-12 clubs.

Some will, for reasons valid or invalid, start to wonder if Kevin Sumlin will be able to make it happen in Tucson. The Wildcat coach is just 13 games into his career leading the club, but has won just five. Sumlin’s crew will get a break this week, before welcoming Northern Arizona. The slate gets a bit dicier from there, with Texas Tech and UCLA before and after another bye week. If the ‘Cats go to a bowl, some of the murmurs will quiet, but we’ll see how the winds change in the desert.

TAKE OF THE WEEK:  With so few games in the books this early, it’s tough to find a ton of really fiery takes. However, we found one (h/t to our friends over at FCS Nation Radio).

Texas Tech opens the season with FCS foe Montana State (against whom they are favored by 25, for entertainment purposes only) this weekend, and writers have to do something to get people fired up for these games. The folks over at Wreck ‘Em Red came up with this to stoke the fire for a Bobcat team that finished last season 8-5 and ranked 17th in the FCS:

Finishing in 4th place in the Big Sky Conference (arguably the FCS version of the SEC), the Bobcats were one of four ranked teams in their league at the end of the season.

No. A million times no.

However, despite the four aforementioned teams making the FCS playoffs, the Colonial placed six in the postseason. Those six (Maine, Delaware, Elon, James Madison, Stony Brook, Towson) all also finished in the top 25. Some may argue the Missouri Valley Football Conference belongs in the conversation, but is a bit top heavy (it placed three teams, including the eventual national champion North Dakota State). The Bison have won seven of the last eight national championships.

The Big Sky is a great conference, sure. The SEC of the FCS? Not so fast.

In all seriousness, keep an eye on Montana State QB Troy Andersen. He represents the rare breed of quarterback who rushes for more yards than he accumulates through the air (1412 yards and 21 rushing TD last year, versus just 1195 passing yards and three rushing TD).

BOWL NEWS:  You likely saw from Kevin the news that Liberty has modified its secondary bowl agreements through 2025. Our pals at LFSN addressed this in the Flames Minute podcast, adding that they expect the list of bowls to “grow”. Give Liberty this — they’re pulling out all the stops in trying to build a relevant program.

THREE FOR ME:  I will, naturally, be watching a number of games this weekend, but you should keep an eye on these three “out of the spotlight” tilts.  Here’s why (all times Eastern and odds for entertainment purposes only):

James Madison at West Virginia (-6), 2:00pm Saturday, ATTSN:  Both schools have new coaches (Curt Cignetti at JMU, Neal Brown at West Virginia), and there’s still a lot to learn about each. Cignetti enjoyed success in his time leading Elon, taking a moribund Phoenix program to the playoffs in both years he guided it. Cignetti also, ironically, played at West Virginia. The Dukes could send quite the shock to the FBS system if they could somehow clip the Mountaineers Saturday.

#21 Elon at #19 North Carolina A&T (NL), 6:00pm Saturday:  These two regional FCS rivals — the schools are separated by just 20 miles in the Piedmont of North Carolina — have enjoyed quite a bit of recent success. We’ve discussed Elon’s performance of late, but A&T actually has it beat. The Aggies went 9-2 in Sam Washington’s first year at the helm after replacing legendary Rod Broadway, including winning its second Celebration Bowl (HBCU national championship) in a row, and its third of the last four. The Aggies’ stout defense and its ability to contain Phoenix quarterback Davis Cheek will tell the tale Saturday night in Greensboro.

#22 Syracuse (-18) at Liberty, 6:00pm Saturday, ESPN3:  Let’s be realistic:  Syracuse should win this game. The line reflects that. The national attention — or lack thereof — reflects that. That said, there are a couple of interesting factors at play here. Syracuse is the highest-ranked opponent to ever visit Liberty’s Williams Stadium (even if the Flames did pay Syracuse a significant amount for the privilege), and the newly-renovated facility in Lynchburg should be super-hyped for this one. The Orange won 10 games last year, including the Camping World Bowl, but take the field without graduated quarterback Eric Dungey. The Flames return star quarterback Stephen “Buckshot” Calvert and catch-everything wideout Antonio Gandy-Golden, and it will be compelling to watch how those two perform in Hugh Freeze’s high-powered offense.

TRIVIA ANSWER:  We asked earlier:  Liberty hosted three nationally-ranked teams in 1989, the first year of Williams Stadium’s existence. Who were those teams?