Breaking down Week 12 of the 2018 college football schedule 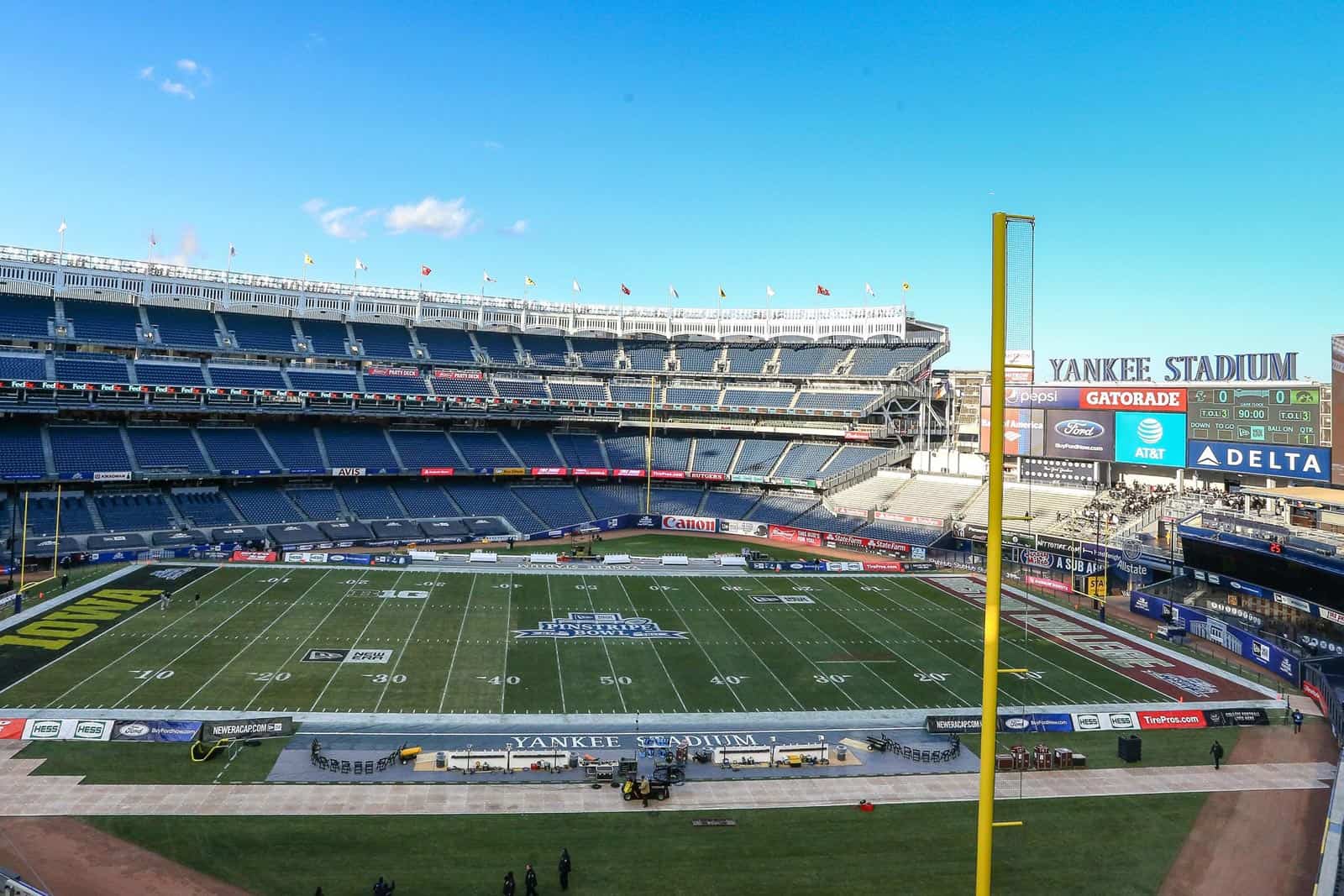 With a mere three ranked vs. ranked matchups and only one featuring a member of the Top Ten, Week 12 of the college football schedule may not be as sexy on the surface as its counterparts, but it sets up well for at least one jaw-dropping upset.

This is the SEC’s traditional late-season “off week.” While none of its members have a bye, many are overmatched against a smaller opponent. (1) Alabama hosts The Citadel, (5) Georgia has UMass, (7) LSU plays Rice, (13) Florida welcomes FCS Idaho, and (17) Kentucky hosts Middle Tennessee.

The MAC gets things started with four conference matchups spread between Tuesday and Thursday nights. Of the four “other” pre-Saturday games, check out Tulane at Houston (Thursday at 8pm EST on ESPN) and (25) Boise State at New Mexico (Friday at 9pm on CBSSN). Both feature a potent passing attack (the Cougars are ranked No. 12 nationally in passing while the Broncos are No. 13) taking on a secondary that has struggled (the Green Wave are No. 121 vs. the pass while the Lobos are No. 122).

Saturday starts with (10) Ohio State visiting Maryland at Noon EST on ABC. The Terrapins just so happen to have one of the best pass defenses in the nation (No. 18 in the FBS and No. 2 in the Big Ten), a strength that pairs well against a Buckeye pass attack ranked No. 3 nationally. From this game you can switch over to South Florida at Temple (ESPN News), featuring two teams who have potent rushing attacks and questionable defenses.

The mid-afternoon time slot starts earlier than usual, with (12) Syracuse and (3) Notre Dame clashing at 2:30pm EST at NBC. An hour later, (9) West Virginia will be tested at Oklahoma State on ABC.

Primetime offers up two intriguing matchups, both at 8pm EST. (16) Iowa State visits (15) Texas on the Longhorn Network and (11) UCF hosts (24) Cincinnati (read more about this one below in our “Perfect Storms” segment) on ABC.

8: Arkansas State has won 8-straight over Louisiana-Monroe (last loss in 2009)

No defender has recorded more sacks going into Week 12 than Louisiana Tech senior defensive end Jaylon Ferguson (#45) with 12.5. He even managed two in the Bulldogs’ loss at (21) Mississippi State in Week 10. It sets up well against a Southern Miss O-line that’s given up 27 sacks this season, earning it a No. 102 rank nationally. It ties the Golden Eagles with Kansas, only the Jayhawks have played 10 games vs. the Eagles’ nine. Ferguson is rated fourth overall among defensive ends expected to declare for the 2019 NFL Draft.

Though (2) Clemson is ranked a respectable No. 28 nationally in passing, its offense (currently scoring the fifth-most points in the FBS) is built on the foundation of a rushing attack ranked a lofty No. 12. Leading the way is sophomore running back Travis Etienne (#9), ranked No. 4 in the FBS in rushing touchdowns (15), No. 8 in yards per carry (8.47) and No. 17 in yards per game (107.6). Look for his Heisman stock to rise against a Duke defense ranked No. 108 in the country vs. the run. The Blue Devils have given up a combined 1,099 ground yards and ten rushing TDs in their last three appearances. That’s more than the 1,060 and nine scores that they allowed cumulatively in their first seven games of the season.

The biggest mismatch in the passing game this week, tune in to this one to see East Carolina’s aerial attack – ranked eighth in the nation and No. 1 in the American Athletic – torch a UConn defense ranked No. 127 nationally vs. the pass. Only three programs have been more generous through the air than the Huskies. Players to watch include true freshman quarterback Holton Ahlers (#12) – he took over under center in Week 8 and has since passed for 1,215 yards and six scores – and senior wide receiver Trevon Brown (#88), No. 4 in the FBS in receiving yards per game (128.2).

Not only is this one of the stiffest tests to date for (11) UCF, it features two of the most potent rushing attacks in the nation. The Knights are currently ranked No. 4 in the FBS in rushing yards per game while the Bearcats are No. 17. The imbalance comes on defense where Cincinnati is a lofty No. 11 nationally against the run while UCF is a lowly No. 105. Check out Bearcat sophomore running back Michael Warren II (#3), he’s tied for the second-most rushing touchdowns in college football (17). For UCF, it’s a trio of backs – sophomore Greg McCrae (#30), junior Adrian Killins, Jr. (#9) and senior Taj McGowan (#4) – combined they’ve racked up 1,554 rushing yards and 18 scores. Could this be the Knights first loss since Dec. 17, 2016?

The “Battle for the Old Oil Can” debuted in 2011 after a contest aimed at naming the rivalry and establishing a traveling trophy. The repurposed antique “recounted the discovery of an old oil can from Fresno (circa 1935) that was supposedly recovered during a San Diego State campus building project.” The Bulldogs have had the can in their garage four times vs. the Aztecs’ three.

Awarded to the winner of the Big Game, the tale of the Axe  begins with a series of baseball contests between the two schools in 1899. That’s when the Axe was purchased, “probably from Sears” by Stanford fans and painted red. During the three-game series, Cardinal enthusiasts used the Axe to chop up a variety of Cal related items, including beheading a scarecrow wearing school colors. After Stanford blew a late lead in game three, Cal fans stole the Axe.

One of seven bells awarded in FBS rivalries, USC and UCLA’s Victory Bell dates back to 1939 when the UCLA Alumni Association gave the bell, a massive 295-pounder off a locomotive, to its alma mater. The Bruins rang the bell after each football score for two seasons until 1941, when members of a USC fraternity disguised as UCLA fans, stole the bell during the season opener.

After a series of shenanigans, the two schools signed an agreement before the 1942 game to award the bell to the winner of the cross-town rivalry. The recipient earns the privilege of painting bell’s carriage its school colors, which the Trojans have done 44 times vs. the Bruins’ 31. Four games (1944, 1958, 1971 and 1989) ended in ties.

(13) Florida beat FCS Charleston Southern 53-6 in its opener and then hosts Idaho this Saturday. The Vandals stepped down from the FBS to the FCS ranks this season, meaning that the Gators will technically double-down on FCS opponents in 2018. That’s true even though Idaho was an FBS member when the game was originally slated to be played in 2014, a contest that was postponed – by four years – due to lightning.

The last time Florida played two FCS teams was 30-years ago, in 1988, when it beat Montana State (69-0) and Indiana State (58-0) on its way to a 7-5 finish in head coach Galen Hall’s final full season at the helm. Before that, it’s all the way back in 1945 that the Gators scheduled two opponents considered “non-majors” at game time – the Louisiana Ragin Cajuns (then members of the Louisiana Intercollegiate Conference) and U.S. Amphibious (a team based at the military training base in Norfolk, Va. during WWII).