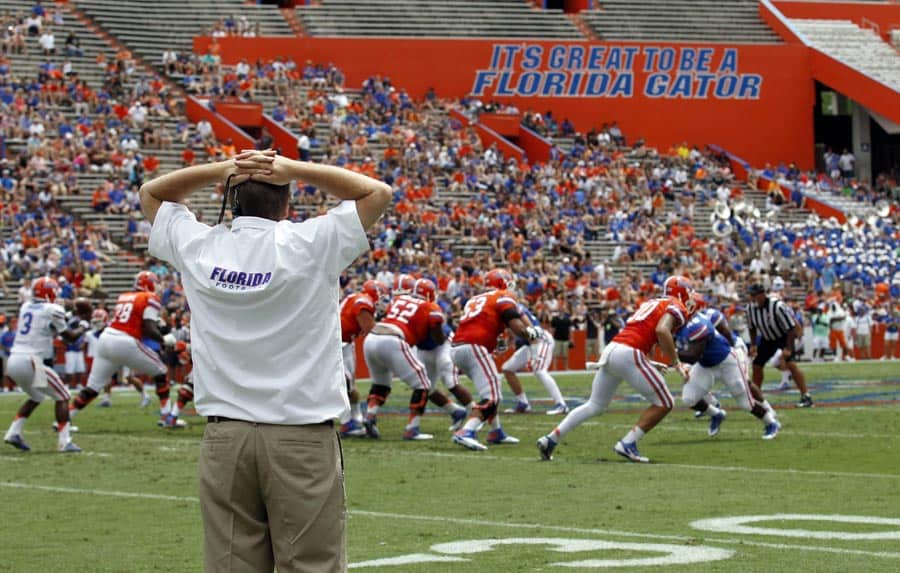 That probably wasn’t the original plan, however.

Florida is slated to host the Idaho Vandals this season on Nov. 17. The game was originally scheduled for the 2014 season, but it was canceled due to lightning.

But then in 2016, Idaho announced that they were dropping their football program down from the FBS to the FCS beginning with the 2018 season.

Somewhere during that time period and when their 2018 schedule was announced, Florida added a home game against the Charleston Southern Buccaneers, also an FCS team.

Now, according to copies of game contracts obtained from the University of Florida, it looks like Florida might play two FCS teams in 2019 also.

UF will pay UT Martin a $500,000 guarantee, per the contract that was signed by Florida’s Director of Athletics Scott Stricklin on Dec. 20, 2017. Stricklin signed the Towson contract a little over a month prior on Nov. 8, 2017, and the Tigers will receive a $450,000 guarantee.

It’s likely that one of the the aforementioned FCS opponents in 2019 will be moved to another season. Confirmation of that was sought, but neither Scott Stricklin nor Senior Associate Athletics Director Steve McClain replied to our emails.

According to a report by SBNation, Florida received an exemption for the 2018 Idaho game from the NCAA allowing the game to count toward bowl eligibility for the Gators. We also sent Steve McClain an email regarding this issue a few weeks ago and received no response.

Florida to host Samford in 2021

FBSchedules.com has also learned that Florida will host the Samford Bulldogs on Nov. 20, 2021. The Gators will pay the Bulldogs a $500,000 guarantee for that game.

And they’ll still play a tougher schedule than 3/4 of the Big (Little?) Ten.

If Florida is in contention for a potential spot in the College Football Playoff, this would likely hurt their chances in the view of the selection committee correct?

They play Florida State every year. Who else outside seven teams in the ACC does that?

@ David. Yeah, and they have one victory since 2010. Yip! Eee! Scheduling someone tough and losing isn’t much to brag about.

Halfway through the season, who has Florida beaten or played that was any good? A loss to a Little Ten team. A 1 point W to a team that lost a Little Ten team. LSU has a victory or Syracuse that looks OK. 4 Home games. 1 neutral. 1 Road Game.

– At this point in the season Florida has played 2 teams with Losses to the Little Ten, 3 Including themselves.

So, where are these tough games? Michigan? They are from the Little Ten, so no of course not. I will give you LSU, So. Carolina and Georgia.

Florida right now is a hot mess, I highly doubt they will be playing for a National Championship within the next 3 years so it does not matter who is on their schedule right now. Also in 2019 they play FSU & The U, they may want to see about exchanging one of those FCS teams for a G5 just in case things turn positive but they have only beaten FSU once in the last 8 years & The U playing some good ball now so they may have two losses right there anyways.

I guess that since the last two times the Big (Little?) Ten was in the CFP, they failed to score a point.

I suppose that means the Big (Little?) Ten won’t be that good next year. Right?

@ Joe, You just predicted that the 2019 schedule will still be tougher than the Little Ten’s. You can predict the future but don’t like it when someone uses a season that finished just two months ago to pick apart your argument about schedule strength? Your argument debate is pretty laughable.

The Little Ten has fared poorly on the national stage, in games that matter.

The SEC has not.

You remember who was in the last game this year, right?

One of the funniest traits about SEC fans: they will tell you their 2065 schedule is already tougher than everybody else’s too!! But forget any actual results, let’s just base it on fantasy and future guesses.

This Joe guy always makes me laugh on here. His mission: Defend all things SEC no matter what. You don’t even know what team he is actually a fan of, but it doesn’t matter, because he will hang on the nuts of any team that plays in the SEC and succeeds. Ohh, and entire conferences do not play in games or national title games, teams do. But that doesn’t matter to him, he will mention whatever makes him feel better. Being completely honest, the SEC (overall) has been the most successful conference for quite some time but they have also been one of the weakest OOC scheduling conferences as well.

Regarding the article, It is what it is. Call a spade a spade. UF has a sissy “non-conference” schedule overall . The whole Idaho dropping to FCS in the time frame makes it sound worse though.

God lord. This Joe guy just loves bashing the B1G. Never seen any1 post so much dik sucking Sec bull crap in my life. Get a life bro. I had to say something, hell im a Big 12 homer. But good god man, find a hobby or girlfriend.