Breaking down Week 1 of the 2019 college football schedule 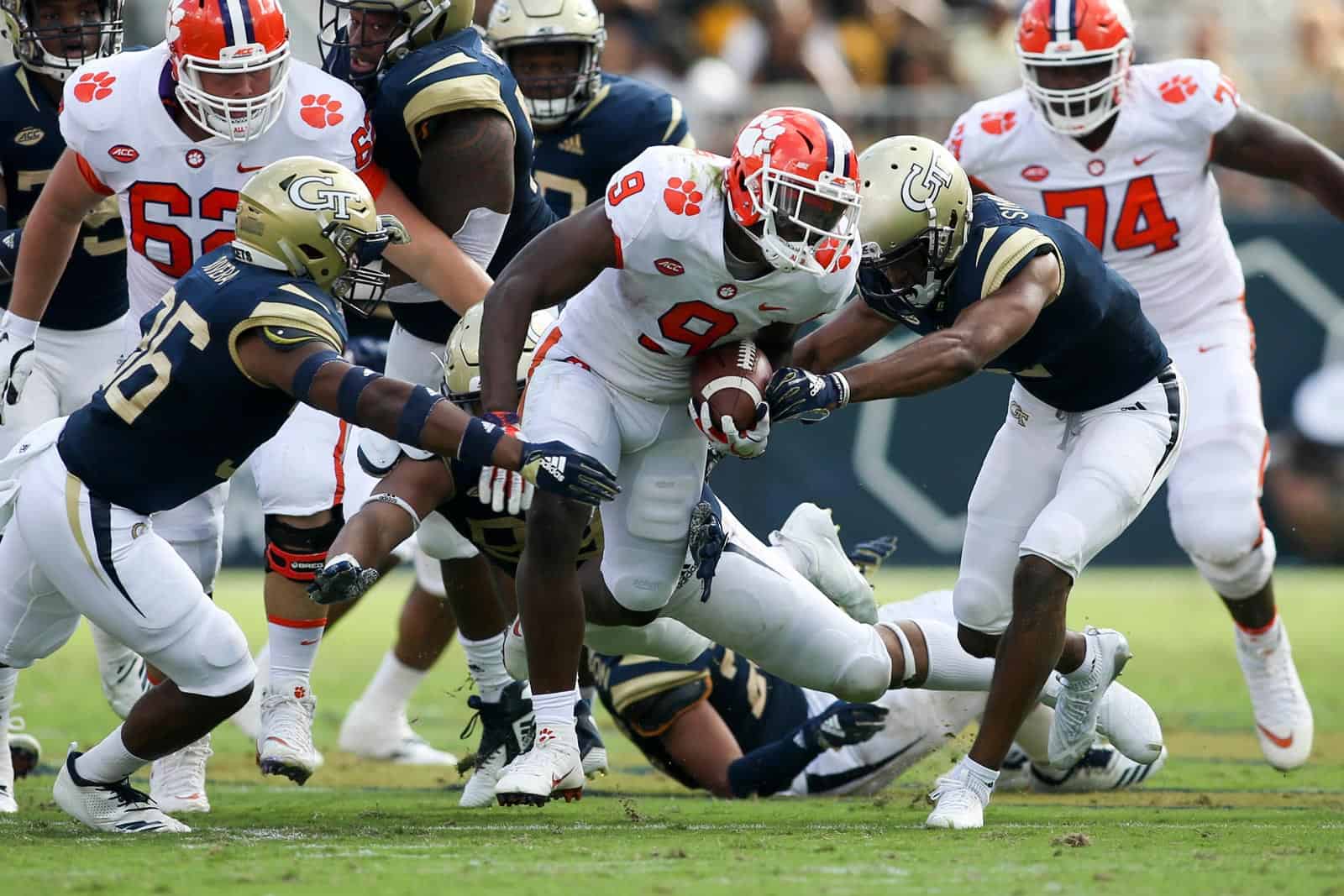 After whetting our collective whistles with the two games on offer last Saturday, it’s finally time, at long last, after much gnashing of teeth, to kickoff Week 1 of the 2019 college football season.

On tap are a whopping 83 games, spread across Thursday (16), Friday (8), Saturday (57), Sunday (1), and Monday (1). Though the cornucopia is stuffed full, quality matchups aren’t a huge part of the plenty. Almost half of the games (40, or 48%) feature an FBS program taking on a team from the FCS. Of the remaining 43 FBS matchups, only ten (23%) feature two Power 5 members clashing and only one (2%) features two ranked teams meeting.

The cream of the crop on Thursday night is Georgia Tech’s visit to (1) Clemson on the ACC Network at 8pm EST. It’s also one of only four conference games in Week 1. If you’re up late, tune into (14) Utah at BYU at 10:15pm EST on ESPN. The best action on Friday night comes at 7pm EST – Tulsa at (18) Michigan State on FS1 and (19) Wisconsin at South Florida on ESPN.

Saturday is jam-packed, in the noon EST time slot check out FAU at (5) Ohio State on FOX and Ole Miss at Memphis on ABC – the Rebels’ rushing D finished 2018 ranked No. 116 and they’ll face a Tiger ground attack that finished No. 4. Lots of players have come and gone in the off-season, but it could get interesting.

Week 1 wraps up with Houston at (4) Oklahoma on Sunday night at 7:30pm EST on ABC and (9) Notre Dame at Louisville on Monday night at 8pm EST on ESPN.

Only four FBS programs allowed more rushing TDs than did Kent State last season, coughing up 38 on its way to a 2-10 record and a No. 114 finish in rushing defense. Cue up Arizona State and junior RB Eno Benjamin (#3) – who finished 2018 ranked No. 5 nationally in yards per game and tied for No. 9 in rushing TDs – and the matchup looks fraught for the Golden Flashes. Benjamin was a workhorse last season, carrying the ball 300 times – the third most in the nation – a number that might rise, especially early in the season, as the Sun Devils are breaking in a new QB.

In 2018, Wisconsin RB Jonathan Taylor (#23) led the nation in rushing, won the Doak Walker award and finished ninth in the Heisman vote. He’ll open this season vs. a South Florida defense that finished No. 123 vs. the run last year. The Bulls allowed four-plus rushing TDs on five separate occasions in 2018, including giving up five such scores, apiece, to both Tulane and Marshall. Look for Taylor, who is currently tied for No. 8 in Vegas’ early Heisman odds, to potentially make an early splash in the race for college football’s most coveted individual award.

Despite finishing 8-6 last year, injury-laden Houston had one of the worst defenses in the FBS – ending the year ranked No. 119 in scoring and No. 127 in total D. Add in that the Cougars only return four starters to that side of the ball, and the opener at high-powered Oklahoma looks scary at best. Tune in to see a Sooners’ passing attack that finished at No. 7 nationally last season take on a Houston D that was ranked No. 124 vs. the pass. If that weren’t enough, check out Oklahoma’s No. 11 ranked rushing offense vs. a Cougars’ squad that finished 2018 at No. 115 vs. the run. Keep an eye on Alabama transfer and now Oklahoma senior starting QB Jalen Hurts (#1) and one of the best running back combos in the nation in junior Trey Sermon (#4) and sophomore Kennedy Brooks (#26).

The Centennial Cup – Colorado State vs. Colorado (at Denver, Col.) – the Rocky Mountain Showdown – series started in 1893 – Colorado leads 66-22-2 and has won four-straight.

Though the rivalry is 126-years old, the Centennial Cup didn’t make its debut until 1986. Apart from WWII, the Rams and Buffs met consecutively from 1906-58, after a 25-year hiatus they reunited in 1983. The game became an annual affair again in 1995. The Cup gets its name from Colorado’s nickname, the “Centennial State,” honoring its statehood, in 1876, coinciding with the 100-year anniversary of the Declaration of Independence. Colorado has won 21 Cups vs. Colorado State’s eight.

The Victory Barrel – East Carolina at NC State – series started in 1970 – NC State leads 17-13 but ECU has won three of the last four.

These two schools, located a mere 90 miles apart, played consecutively from 1970 to 1987 as heated rivals. The ’87 contest, a 32-14 ECU win in Raleigh, ended badly with Pirate fans ripping down both goalposts and a fence, postgame fights also broke out on the field. The series was suspended by then NC State AD Jim Valvano. The two didn’t meet again until the 1991/92 Peach Bowl and have met 11 times since. The Victory Barrel debuted in 2007, each team winning the prize three times apiece.

Who else remembers when former Texas AD Deloss Dodds got up in front of the press in November of 2008 and announced that then Longhorn defensive coordinator Will Muschamp was the “heir apparent” to then head coach Mack Brown?

Speed forward two years to December of 2010 and Muschamp abdicated the throne at Texas and instead took the head job at Florida. He lasted four seasons in Gainesville, ultimately ousted after posting a 28-21 record. Meanwhile, Brown resigned from his job at Texas in 2013. Muschamp resurfaced as the DC at Auburn in 2015 and took the head job at South Carolina in 2016. As for Brown, he served as an ESPN commentator until taking the North Carolina job (for the second time in his career) for the 2019 season.

And that sets up this week’s super-interesting matchup between the heir-apparent-that-never-was vs. his former monarch in the season opener. The only other time the two have met as coaches was the 2002/03 Cotton Bowl, Brown as Texas’ head man and Muschamp as the DC at LSU, the Longhorns won that one 35-20.

I don’t believe that Penn State has ever played Idaho before (at least according to Penn State game notes).