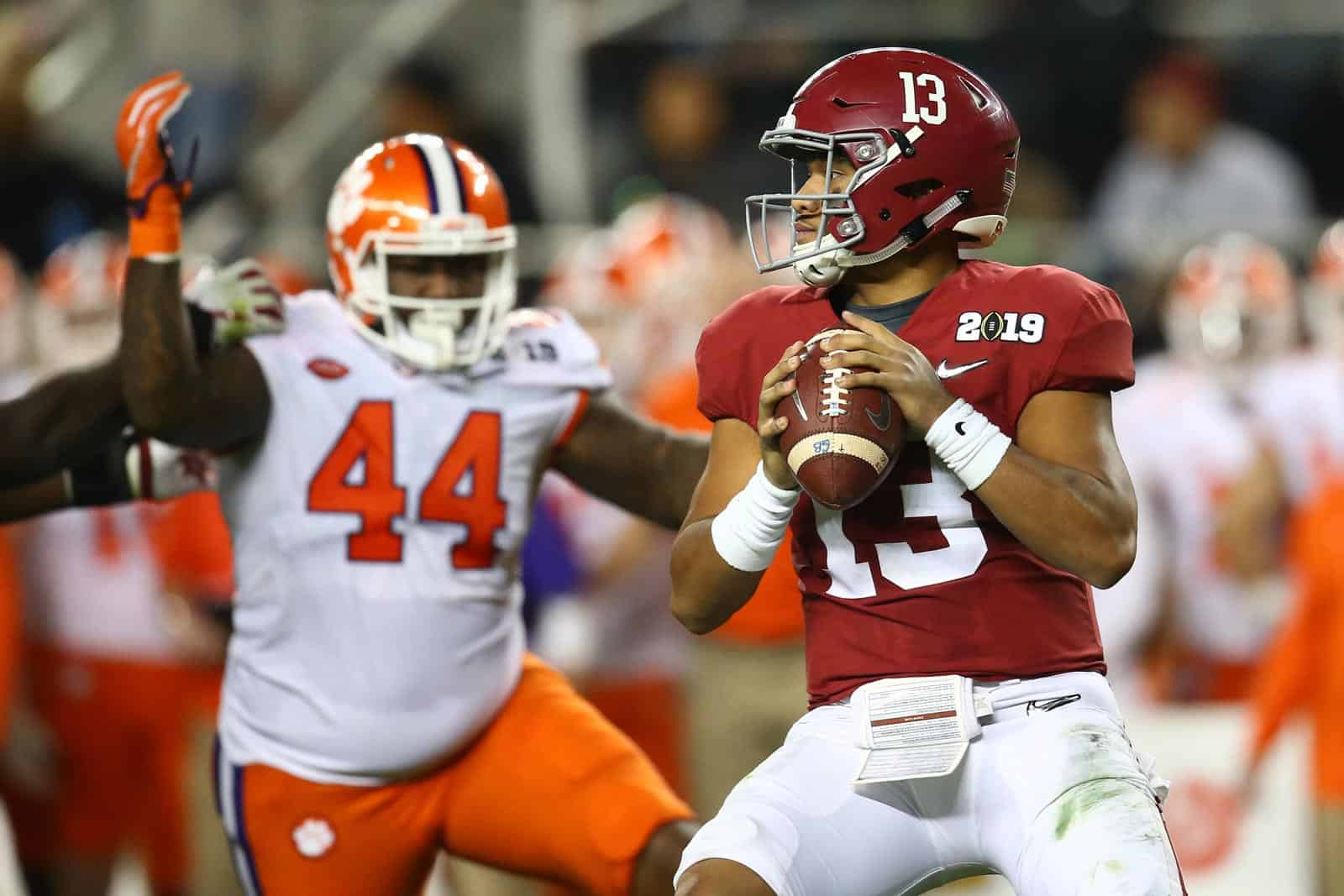 Athlon Sports has released their 2019 preseason Top 25 college football rankings, and the Alabama Crimson Tide are ranked number one.

Alabama enters the 2019 season after suffering a 44-16 defeat at the hands of the Clemson Tigers in the College Football National Championship.

Below is Athlon’s complete 2019 preseason Top 25 rankings. Be sure to take in their preview of each team:

FBS contests in Week Zero include Florida vs. Miami in the Camping World Kickoff (in Orlando, FL) and Arizona at Hawaii. In the FCS, Samford takes on Youngstown State in the Guradian Credit Union FCS kickoff (in Mobile, AL) and Villanova travels to face Colgate.

Week 1 of the 2019 season begins on Thursday, August 29 with 29 FBS/FCS games on the schedule. Highlights include Georgia Tech at Clemson, Utah at BYU, and UCLA at Cincinnati.

There are nine games scheduled for Friday, August 30, including Colorado State vs. Colorado (in Denver, CO), Oklahoma State at Oregon State, and Wisconsin at USF.

Saturday of Week 1 features a full day of action, and three games follow on Sunday with one game set for Monday, Sept. 2 (Labor Day).

Some quick comments on some of Athlon’s Top 25 rankings:

I think Ohio State will knock off Michigan on the final day of November. The Wolverines will come up a little short.

Not exactly sold on Ed Orgeron as a head coach. If LSU gets off to another slow start, my guess is that he will be out of a job.

Maybe it’s only me, but Texas A&M is overrated in my opinion.

Nebraska is my favourite team, hopefully Coach Frost will continue to turn things around.

Syracuse could easily be in the Top 20 when the final poll is released. Especially if they can knock off Clemson at home on national television.

Iowa State has been a team that has impressed me over the last four seasons. They have the ability to knock off top level teams at home. If they can do that over the course of an entire season at home & on the road, the Cyclones will soon compete for a Big 12 Conference Championship.

How about those Virginia Cavaliers at 25? It’s been awhile since those guys have seen any ranking of any type.

Ed Orgwron isn’t going anywhere because there second game is Texas and losing to a Top 25 team in the road in primetime (7:30 ABC) Ain’t exactly a fireable offense and I like your syracuse #cusenation point but if they beat clemson the sky is the limit they won’t drop more than one conference game probably at FSU but if they go 7-1 with a win over Clemson they’ll be in the ACC Championship and the suprise off all suprises a playoff team. (unlikley everything falls into place I would like to point out but cuse in the playoff would certainly be something)

UCF will finish way higher than 22. That is really a bad ranking. Syracuse will finish higher than 21 with only Clemson and at Florida St being tough tests. I think Ohio St has Head Coach and QB blues and finishes way lower than 5. Penn State is a question mark at 14 I think the coach is better than that, but who is the QB?