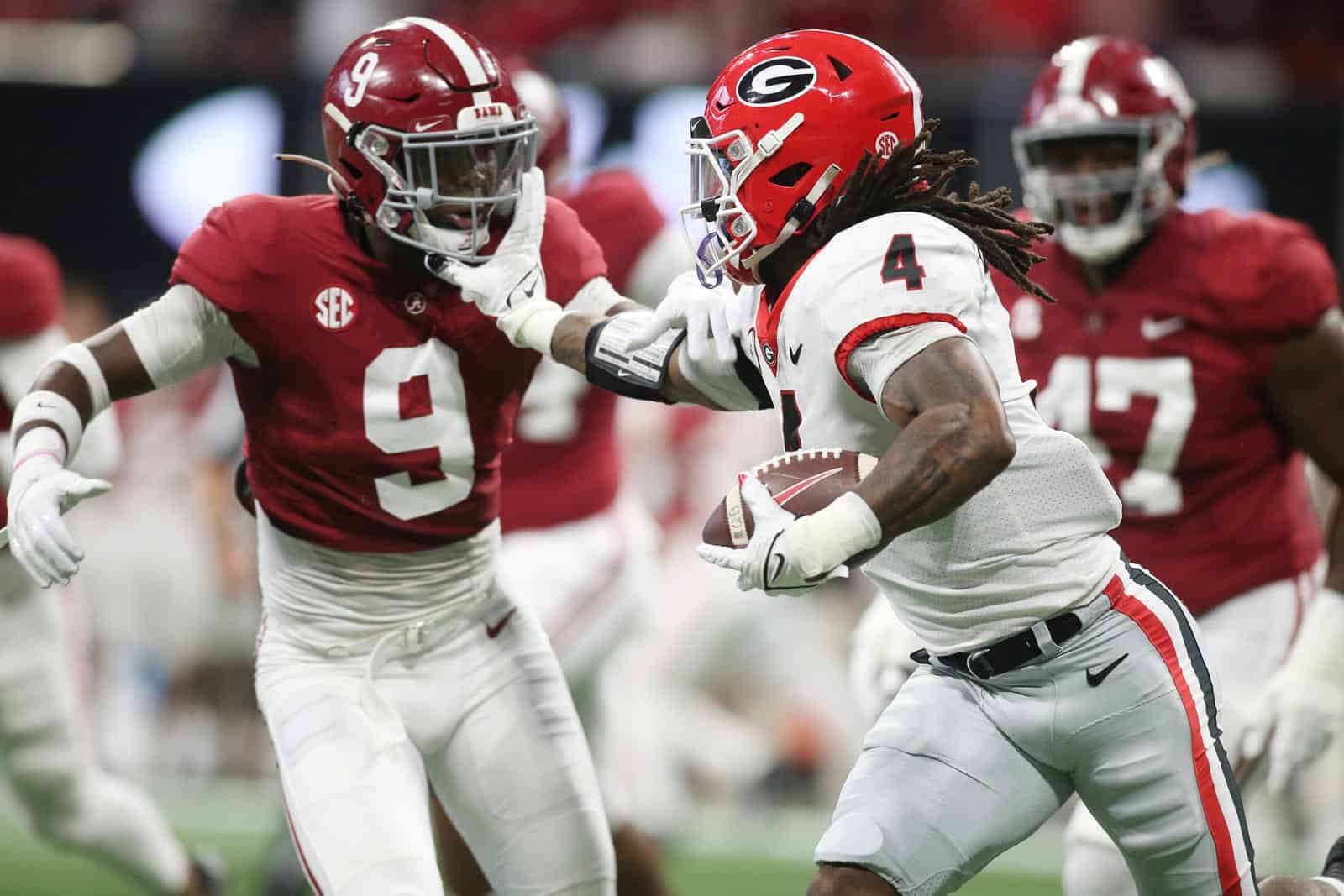 The Alabama Crimson Tide and the Georgia Bulldogs will play in the 2022 College Football Playoff National Championship.

Tickets for the game are currently around $900 plus fees through our partner StubHub.

Alabama, the top-ranked team in the College Football Playoff, dominated the fourth-ranked Cincinnati Bearcats 27-6 in the first semifinal game at the Goodyear Cotton Bowl Classic at AT&T Stadium in Arlington, Texas, on New Year’s Eve. The Crimson Tide jumped out to a 17-3 lead in the first half and never trailed in the game.

Third-ranked Georgia raced to a 17-0 lead over the second-ranked Michigan Wolverines en route to a 34-11 victory in the second semifinal on New Year’s Eve at the Capital One Orange Bowl at Hard Rock Stadium in Miami Gardens, Fla.

On the ground, Georgia’s Zamir White led all rushers with 12 carries for 54 yards. UGA running back James Cook rushed six times for 32 yards and also caught four passes for 112 yards and a touchdown.

Alabama will be making their sixth College Football Playoff National Championship appearance. The Crimson Tide won in 2015, 2017, and 2020 and lost in 2016 and 2018. In their first and only CFP championship game appearance following the 2017 season, Georgia fell to Alabama 26-23 in overtime.

Alabama and Georgia met earlier this season in the SEC Championship Game. The Crimson Tide dominated the Bulldogs in that contest, 41-24, at Mercedes-Benz Stadium in Atlanta, Ga.

Alabama has defeated Georgia in their last seven contests dating back to the 2008 season. The Crimson Tide lead the overall series 42-25-4.

According to BetOnline.ag, Georgia has opened as a 2.5 point favorite over Alabama.

is anyone surprised by this?

Great, this will make the 4th time in 13 years that BAMA has been a underdog in which Alabama has won all of those games by at least 13 points , if Saban & BAMA keep that streak going they’ll be National Champions again RTR.

We all knew the south eastern cheaters would be there

What cheaters there are no rules anymore everyone can pay anyone as much as they want players can go to any school they want any time and Saban warned this would happen if free agency was allowed to in college athletics. The best will transfer to the best.

What cheaters anyone can pay the players any amount they want to now and it is all legal no rules anymore. Any player can transfer any time to any school. Coach Saban warned this would happen if college free agency was allowed so now everyone has to live with it

Both games were snore fests and not a good look for college football.

Very tough to make the case for expanded playoffs after this. Who wants to see Bama beat #8 team by 30?

Honestly I don’t see how any northern/west coast teams can complete with top SEC teams. They’ll be getting even better with OK and TX.

It’s almost like SEC should add Clemson, FSU, Ohio State, and ND and make their own play off.

chipmunk, you are right, its not the players or the coaches that cheat, its the alumni that want their team to win, so who is richer? Their are teams all over. Best games, Purdue-Tennessee, Tennessee is my team. Central Michigan-Washington State was another that was good!

How can the alumni cheat as stated earlier it’s all legal now. Alumni are only following the NIL rules made legal by the courts to satisfy the greedy top line players who only play when they choose to instead of honoring their commitments to the school and NIL agreements.