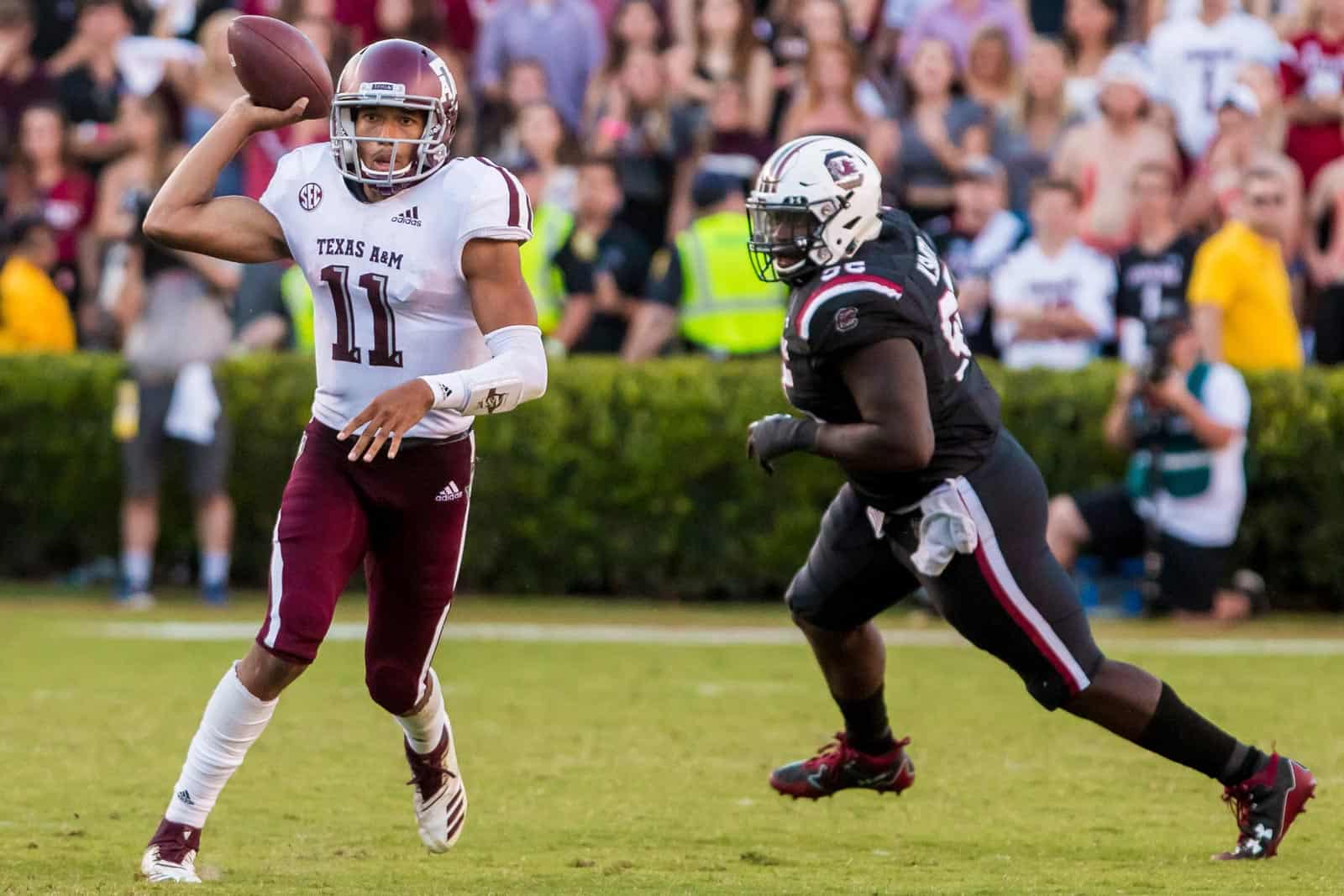 By the time Florida and Miami Fla. kickoff the 2019 season this Saturday night in Orlando, it will have been 219 days since we’ve seen live college football.

To go along with the two games slated for Week Zero, what follows is a generous serving of fascinating elements unique to this season’s slate.

Fire up the fryer. Ice down the cooler. Gird your loins. It’s on.

1. BYU is the only FBS program to start the season with FOUR Power opponents

BYU kicks off its campaign with consecutive games vs. Utah, at Tennessee, vs. USC, and vs. Washington, giving it one of the toughest starts in the FBS. The upside is, the Cougars won’t face another Power foe during the regular season.

3. MIAMI FLA. and MISSOURI will both spend six straight weeks of the season at home

After the Hurricanes visit North Carolina on Sept. 7th they’ll return to Miami and stay all the way until their Oct. 26 game at Pitt. As for the Tigers, they open at Wyoming on Aug. 31 and then return to Columbia to sleep in their own beds until Oct. 19 when they visit Vanderbilt. Both teams’ epic homestands include an open date on Sept. 28.

4. INDIANA has the TWO biggest losing streaks to snap in 2019

No team is suffering a longer losing skid vs. a 2019 opponent than the Hoosiers who have lost 23-straight to both Ohio State AND Michigan. The good news is, Indiana gets both top-ranked programs at home in Bloomington – the Buckeyes visit on Sept. 14 and the Wolverines come calling 10-weeks later on Nov. 23.

The next longest streak on the chopping block this season is San Diego State’s 19-game losing skid vs. UCLA. The Aztecs are 21-0-1 vs. the Bruins, the tie coming 95-years ago in 1924. The two will meet on Sept. 7 in Los Angeles.

5. NORTH CAROLINA and APPALACHIAN STATE will play exactly 79 years after their last meeting

Despite being separated by a mere 162 miles and hailing from the same state, the Tar Heels and Mountaineers haven’t met on the gridiron since the year before the United States entered World War II. In a twist of fate, their grand reunion (the longest wait of any matchup in 2019), is slated for Sept. 21, 2019, or precisely 79 years since the last time they played, on Sept. 21, 1940.

Though it’s commonplace for an FBS program to book a single game vs. an FCS school, having two such opponents is rare. Many times, as is the case with Florida both this season and last, the anomaly is due to a scheduling snafu. While doubling up on foes from the lower level might seem advantageous, keep in mind that even though the NCAA doesn’t limit the number of FCS opponents an FBS program can schedule, only one win vs. an FCS opponent per season counts toward bowl eligibility.

7. NORTH CAROLINA and WAKE FOREST are slated to meet in non-conference play

Though the Tar Heels road trip to Winston-Salem to play the Demon Deacons on Friday, Sept. 13 looks just like an ACC game featuring a pair of in-state rivals, it’s not. No indeed, the 2019 version of UNC vs. Wake Forest is a NON-CONFERENCE game.

The two schools concocted the plan back in 2015, scheduling non-ACC games this season and then again in 2021. According to Dan Wolken of USA Today Sports, the decision was made at least in part so the two rivals – who last met in ACC action in 2015 and weren’t scheduled to play again until 2022 – could play more frequently. “Instead of UNC and Wake Forest spending upwards of $1 million to fill a non-conference date with someone like Louisiana-Monroe or North Texas, they will play a more cost-effective game against a real rival, which will generate more fan interest and ticket sales.”

8. TEXAS and BAYLOR won’t play outside of the Lone Star State until October

The Longhorns open the season with back-to-back home games vs. Louisiana Tech and LSU and then travel a quick 160 miles southwest to Houston to face Rice in NRG Stadium. They return to Austin for a Week 4 visit from Oklahoma State and take Week 5 off. That makes their Oct. 5 road trip to West Virginia their first out-of-state action.

As for the Bears, they open with consecutive home dates with FCS Stephen F. Austin and UTSA before taking Week 3 off. In Week 4, they travel a similar distance to Houston to face Rice and then are back at home on Sept. 28 to welcome Iowa State. Their first venture outside of state lines also comes on Oct. 5, hitting the road to face K-State.

9. The three FBS teams from Colorado will all play each other for the first time since 1958

It’s been 61 years since Colorado, Colorado State, and Air Force have all met in a single season, also the only other time in history it’s happened.

Colorado and Colorado State played consecutively from after World War II (1945) until 1958. From 1959 onward, the Buffs dropped the Rams in favor of playing the newly founded Air Force Academy, which first fielded a football squad in 1957. That series lasted until 1974, also the last time Colorado and Air Force clashed.

The Buffs and Rams picked up where they left off in 1983 and have played 31 times since including consecutively since 1995. The Colorado State/Air Force series kicked off in 1957, the two met annually from then until 1977 with only five exceptions and have played every season since.

10. The Florida Cup is back after a six-year absence

Established in 2002 by the Florida Sports Foundation, the Florida Cup is also known as “the state championship of Florida.”

Though the Cup is 17-years old, it’s only been awarded five times – in 2002, 2003, 2004, 2008 and 2013. While Florida State meets Florida (a non-conference fixture) and Miami Fla. (as permanent ACC cross-division rivals) annually, the three-way rivalry has been hampered by the limited number of times the Gators have squared off with the Hurricanes. The good news is, the two schools have just inked a deal for a series in 2024 and 2025.

Florida and Miami kickoff the season this Saturday (Aug. 24) in Orlando. The Hurricanes are at Florida State on Nov. 2 and the Seminoles close out the regular season with a visit to Florida on Nov. 30.

11. USC and UMASS get one fewer week off than the rest of the field

This is the first season since 2014 that FBS teams will have two bye-weeks built into their schedules as opposed to the usual one. The extra week off is a result of how Labor Day and Thanksgiving fall into the calendar – an early Labor Day combined with a late Turkey Day can equal an extra Saturday of college football, expanding the regular season from 13 weeks to 14. Given that teams are still playing a 12-game slate, an extra week on the calendar equals an additional bye week.

The Trojans and Minutemen share the unfortunate scheduling caveat of having the second of their two byes during the final week of the season. USC is off Oct. 5 and then Nov. 30 while UMass has byes on Oct. 19 and Nov. 30. Where the other 128 FBS teams all get two breaks during the season, these two get just one. Technically speaking, if the Trojans were to ascend to the Pac-12 Championship Game (Friday, Dec. 6), the “week off” would serve as a bye going into that contest. As an independent, UMass doesn’t have this option.

12. PURDUE will have an opportunity to score its first ever points on VANDERBILT

The Boilermakers and Commodores are slated to meet on Saturday, Sept. 7 in West Lafayette, Ind., their first clash since a home-and-home series in 1941-42. Vandy won both previous games by a combined score of 29-0, meaning that any points that Purdue can manage will be its first ever in series history. The two are also slated to meet in 2029 in Nashville.

13. LIBERTY and NEW MEXICO STATE play each other TWICE…for the second season in a row

In a repeat of last year’s most amazing schedule factoid, Liberty and New Mexico State are – once again – slated to play twice. First up is a Oct. 5 meeting in Las Cruces, N.M. followed by a rematch in the regular-season finale, on Nov. 30, in Lynchburg, Va. Given that the two also met on Oct. 6 and Nov. 24 last season (with the home team winning on each occasion), it means that the two schools will have played four regular-season games in just 421 days.

According to Eric Single of SI.com, it’s the “first time two Division I football teams have played twice in the regular season since 1998, when UMass met UConn on Oct. 24 and Nov. 21.” Read all of Single’s excellent piece to learn how “desperation” played a part in Liberty and New Mexico State’s historic four-game series becoming a reality.

14. TEXAS A&M and SOUTH CAROLINA will both play the Top Three teams in the nation

If the preseason rankings hold, the Aggies and Gamecocks are the only FBS programs scheduled to play not only the No. 1 team in the land, but also No. 2 and No. 3.

Texas A&M has a Week 2 visit from (1) Clemson (the back end of a home-and-home that kicked off last season), has its annual clash with (2) Alabama on Oct. 12 in College Station and then draws a late season trip to (3) Georgia (Nov. 23) as it’s rotating opponent from the East division.

South Carolina draws (2) Alabama as its rotating opponent from the West (Sept. 14 in Columbia), has its yearly meeting with (3) Georgia (Oct. 12 in Athens) and then hosts (1) Clemson in its annual regular-season finale on Nov. 30.

The Aggies and Gamecocks have their yearly clash as SEC permanent cross-division rivals on Saturday, Nov. 6 in College Station in what could be billed as the “Battle of the Beaten Ups.”

The Irish open the season at Louisville, a program they’ve only played once in history – a 31-28 loss in South Bend in 2014. Next up (after a bye on Sept. 7) is a Week 3 visit from New Mexico, who they have never played in football. That leaves the much-anticipated Week 3 blockbuster at Georgia. Notre Dame is 0-2 vs. the Bulldogs, the most recent loss coming in a 20-19 nail-biter in 2017 and before that a 17-10 defeat in the 1981 Sugar Bowl that earned Georgia its most recent national title.

16. All three of STANFORD’S non-conference opponents are ranked in the Coaches Preseason Top 25

Stanford is the only FBS squad in 2019 to have 100% of its non-league schedule vs. ranked programs. The Cardinal open with (25) Northwestern at home, travel to (17) UCF in Week 3, and then finish the regular season by hosting (9) Notre Dame.

17. SAN JOSE STATE and HAWAII will play for the newest FBS rivalry trophy

The team that wins the Week 11 clash between San Jose State and Hawaii in Honolulu will have the honor of being the first-ever recipient of the Dick Tomey Trophy.

Amy, great article as always. So glad college football is finally back. I look forward to reading your weekly factoid articles!!