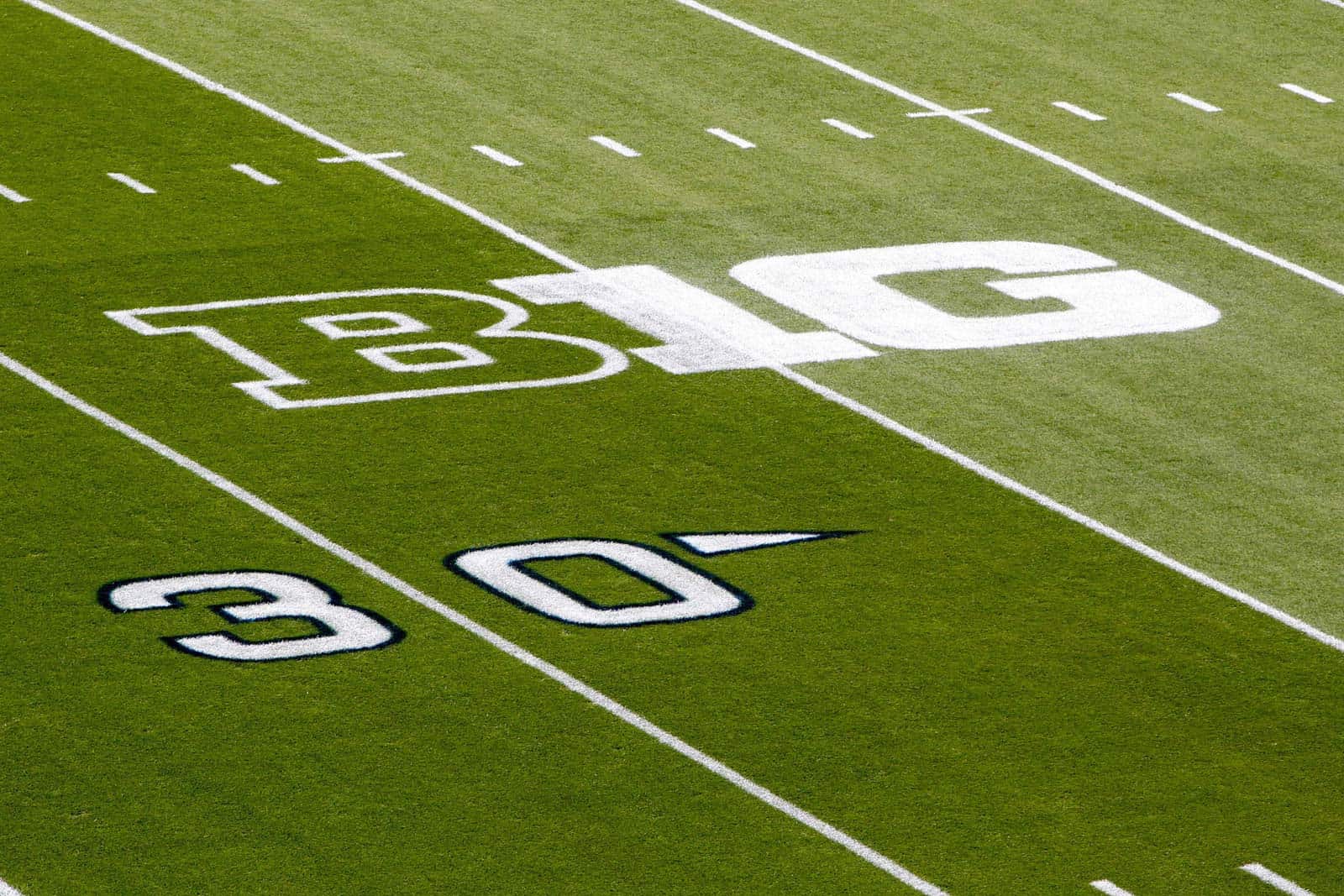 Soft music is playing in the background, the gentle glow of candlelight illuminates the faces of the College Football Playoff Committee. There’s even a hot tub. And a magnum of champagne.

Given that it’s the Big Ten’s big date with the committee, an opportunity to entice the bracket-makers to seed one of its worthy members – the rendezvous is taking place in the Poconos. The conference commissioner makes his case from atop of a seven-foot Champagne Glass Whirlpool bath, situated just above a heart-shaped pool.

Surely, it’s enough to get the Big Ten into the Playoff? Right?

Well, if the committee is indeed committed to the second of its four pillars of protocol – schedule strength – then even all the votive candles in Pennsylvania might not be enough to sway the voters.

Though it’s hard to argue that Big Ten members won’t have plenty to grapple with in-conference, six of its 14 members are listed in ESPN’s debut edition of the Way-Too-Early Top 25, the collective non-league schedule is beyond weak.

Of the 14 members, five – or 36% – won’t face a Power 5 member outside of Big Ten play. Compare that with the ACC, Big 12, Pac-12, and SEC, all which have only ONE member each that won’t play a Power opponent in non-league action in 2019. As a note, we’ve counted Notre Dame and BYU as Power programs across the board.

So, while Illinois, Indiana, Minnesota, Ohio State, and Wisconsin are on the “naughty” list from the Big Ten – only Wake Forest, Baylor, Washington State and Arkansas are on it from the rest of the nation.

Beyond that – only one Big Ten member doubles-down on non-conference Power programs in 2019 – Purdue, which is slated to play Vanderbilt and TCU in back-to-back home games. Compare that to the ACC and SEC with three such members apiece. From the ACC – Boston College (Kansas, at Rutgers), Clemson (Texas A&M, at South Carolina) and Louisville (Notre Dame, at Kentucky). From the SEC – Georgia (Notre Dame, Georgia Tech), Florida (Miami Fla., Florida State) and South Carolina (North Carolina, Clemson).

As far as FCS action, Indiana, Minnesota, and Penn State all get the “gimmee” game this season. Though the Big Ten originally (in 2016) banned members from scheduling FCS opponents, it softened its dictate in 2017, allowing teams with only four conference home games to play an FCS program.

While the Hoosiers and Nittany Lions both have the required number of Big Ten home games necessary to comply, Minnesota (which plays FCS South Dakota State in its opener) has five Big Ten opponents at home in 2019. #whoops

From a bigger picture standpoint, it means that not only will Minnesota and Indiana not play a Power team out of Big Ten play, they’ll also get an opponent they’re 90% likely to beat.

It’s a two-game swing and worthy of an asterisk.

Next, let’s look at the cumulative strength of the non-league Power opponents the Big Ten will play in 2019:

The ten combined for a 78-51 finish last season, with only two (Notre Dame and Syracuse) finishing the season ranked in the AP Top 25. Only three of the nine that made it to the postseason managed to win their bowl game – Stanford (edged Pitt 14-13), Syracuse (downed West Virginia 34-18) and TCU (outlasted Cal 10-7).

Perhaps the most effective way to illustrate the weakness is by narrowing the discussion to contenders. In other words, it’s all well and good that Minnesota’s schedule is weak, but it’s doubtful that the Golden Gophers resume will reach the CFP committee’s desk at decision time.

Though Michigan (at No. 11 in ESPN’s premature Top 25) has No. 5 Notre Dame at home on Oct. 26 – the biggest of the Big Ten dogs Ohio State (No. 4 according to ESPN) has the easiest non-conference schedule of any major contender. That includes Alabama, which also has a super-soft non-league slate in 2019 but at least had the decency to schedule an opponent from a Power league.  Rankings are via ESPN’s early Top 25.

It’s the first time since 1934 that the Buckeyes haven’t faced a current Power 5 program outside of Big Ten play.

As long as there are five Power leagues vs. only four slots in the CFB Playoff bracket, comparative schedule strength is a crucial conversation. Throw an undefeated Notre Dame into the equation and the number of available spots is reduced to three.

For this coming season, the Big Ten is at a disadvantage before the debate even begins.

The article is specifically about non-conference games. I believe she pointed that out.

No sir, the title of the article is “Why the Big Ten won’t woo the CFB Playoff Committee in 2019” and implies the lack of OOC P5 is the reason, but fails to factor in the additional conference game or fact that if there is an additional P5 that like the P12 and BXII they’d be at 10 P5 games. Whole lot of wheels spinning here but the truck ain’t moving.

The Big Ten considers UCONN and Cincinnati as power 5 opponents as well (that can be debated as to their actual quality, but they are considered equal when compared to crappy power 5 teams like Kansas, Arkansas, and Arizona).

And the Big Ten plays 1 more conference game when compared to the SEC and ACC.

Please tell the full story about scheduling in your articles.

Amy hates B1G and favors SECupcakes… her articles are crap…

Ohio State played two power 5 teams out of conference last year along with the 9 conference games and still didn’t get in. By the way, you failed to mention the amount of FCS teams the other conferences play as opposed to the Big 10. Florida played two last year and two coming up this year.

The only reason the Big Ten played less FCS teams the last few years is because they were told to by the conference. Otherwise they would play close to the same as other conferences.

The author is obviously biased, and the drivel should be ignored. The Big 10 plays an additional conference game, so comparing them should include +1 power conference opponents for each team. Not doing this shows bias and ignorance right away. Also, considering that the site is heavily biased towards the SEC to begin with, it’s not surprising that this drivel was published on the site. Alabama plays an FCS team every year typically the week before Auburn. Where’s the article harping on that? Of course, we never see that.

The author has an opinion, just like everyone else. And please provide proof that the site is “heavily biased towards the SEC” other than the fact that I’m a UGA fan. I’ll wait.

I have been on this site for years & no one that writes articles on here is biased one bit! If anyone is biased it is the people that come on here & luv to complain about everything.
I have seen many articles on here (harping) about Bama scheduling & other outstanding P5 teams as well.
This article is just asking & questioning the BIG OOC schedule & how it will manage for them to get a team into the CFP, considering they have not had a team in there in a couple of years & the last couple of times they did, Michigan St & The Ohio State could not even score a point.

I enjoy this website. I check it a couple times a week. That said, this site does show favoritism toward the SEC by only making weekly predictions on SEC games. Here is an example…https://fbschedules.com/2018-sec-football-predictions-week-12/ If this site would provide similar articles for other conferences, there would be less suggestions of favoritism.

Eric emailed me wanting to contribute the SEC predictions column. I didn’t seek it out. To date, nobody has offered to write a similar piece for any other conference.

The playoff committee has shown time and time again that strength of schedule doesn’t matter. All that matters is that teams can’t lose more than one game. While I don’t like it, there really is no playoff upside to schedule a difficult out of conference schedule.

I believe you are half right. It seems the committee values strength of schedule of the final top 25 teams. They talk about records against the top 25 and a little about rankings inside the top 25. However if you beat Iowa and Cincinnati who were just outside the final Top 25 than seems the same to the committee as Rutgers and San Jose St who were outside the top 100 teams.

I would do it differently, but that is my opinion of the committee’s process.

Remember who made the playoffs and who didn’t?

The B10 has wizened up by looking at what the playoff committee does rather than what they say.

I believe Wake Forest can be removed from the 2019 Naughty list since their game with North Carolina is officially a “non Conference” game.

Double Naughty list on Indiana for schedule an FCS and no Power 5 Conference opponent in 2019.

I wonder if you think the Gators’ two FCS opponents counters their two in-state FBS OOCs?

So, the argument by some of the commenters is that since the Big Ten plays nine conference games they should get a pass on their out of conference scheduling?

The Big Ten is weak, top to bottom and this type of scheduling only ensures that will continue.

The fact is, the Big Ten has won only four national titles in the last 50 years. Three by Ohio State, one by Michigan.

The SEC has had four DIFFERENT teams win a national title in the last eleven years.

National champions do not make a conference the toughest conference, they just say a conference has the best team in the country.

The Big Ten’s problem is that they are losing too many games, not that their OOC schedule is too weak. Ohio State has missed the last few years because they lost two games in 2017 and lost to Purdue (by A LOT) in 2018. I would argue a weaker schedule actually gives the B1G an advantage because it provides less opportunities for a loss. If Ohio State goes 13-0 next year, they would be in the playoffs as long as there weren’t more than four undefeated teams, which there have not been since the inception of the CFP, their weak OOC schedule would not matter.

This article is about the B1G’s OOC scheduling. However there is no research or mention of the fact that the B1G also identifies several G5 teams as P5-worthy, (Notre Dame, Cincinnati, UConn, BYU, Army, and Navy). This was reported on by this site (https://fbschedules.com/big-ten-army-three-aac-teams-power-five-opponents/), so I’m not sure why they excluded this information.

Also, MN plays AT Fresno State, and you could definitely argue road games for MN and WI in California and Florida are easily comparable in difficulty to a home game vs Duke (Bama).

The FCS argument is irrelevant since all other leagues also schedule FCS games, usually later in the season as well for essentially bye weeks.

When will Michigan play an FCS school?

Good gravy Amy. I’m unfollowing the site simply because of your bias/ignorance:

– No mention of 9 conference opponents in Big Ten vs. ACC/SEC’s 8 opponents. Which translates to the Big Ten playing more quality opponents.
– Lack of acknowledging quality non p5 opponents within preseason top 25 polls. Why only count BYU and Notre Dame? What about Cincy (beat UCLA and VT) or Army?
– The Big Ten has four opponents in the top 25 poll you reference, while the SEC has five. Not that big of a difference if you ask me.

Unfollowing is your prerogative. Amy (along with Brian and Eric) are contributors to this site. They are freelancers that write what they choose. I don’t tell them what to write and I don’t refuse to publish what they write.

This piece was about non-conference scheduling ONLY as a means to impress the selection committee. Her argument was framed on that basis.

With that being said, comments on this piece are now closed since others have decided to launch personal attacks.