Who Has the Advantage in 2014’s Biggest Neutral Site Games? 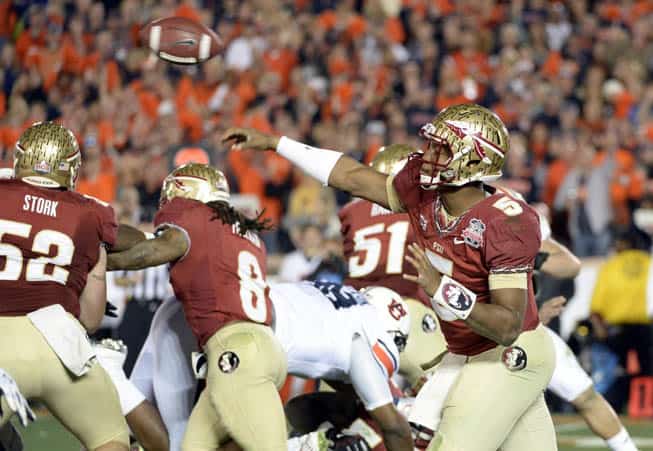 Do certain college football teams have an advantage in neutrally sited games?

Think about it, we know which teams are super-successful at home and which teams can cope best in a hostile, road environment, but what about those that play well when they are neither home nor away?

The following analysis takes a new approach in forecasting what will happen in six of the biggest neutral games in 2014 by weighing which team has the best historical track record at unbiased sites.

While it’s safe to say the defending national champion Seminoles will be the favorite in the 2014 Cowboys Classic, which program has the edge in neutral games?

The Noles haven’t dropped a neutral game since 2010 when they lost 44-33 to Virginia Tech in the ACC title game in Charlotte, NC. The Cowboys, on the other hand, lost on neutral ground as recently as the final game of the 2013 season, a 41-31 defeat to Missouri in the Cotton Bowl in Dallas.

The Crimson Tide are 12-6, or 67%, in neutral play since 2004. Before dropping a game to Oklahoma in last season’s Sugar Bowl in New Orleans, Alabama hadn’t lost a neutral game since 2008 when it lost back-to-back games to Florida in the SEC title game in Atlanta and then to Utah in the Sugar Bowl.

West Virginia is 6-4, or 60%, in neutral play over the same time period, putting it within striking distance of Alabama, at least historically speaking. The Mountaineers haven’t played a neutral game since 2012 when they lost 38-14 to Syracuse in the Pinstripe Bowl in New York City.

With Texas playing UCLA only 200 miles from Austin, this game is less neutral than the others on our list but still technically fits the bill.

The Longhorns are an impressive 16-7 in neutral play over the last decade, earning them a 70% success rate. That said, Texas has lost a neutral game in each of the last five seasons, the latest defeat coming to Oregon in last year’s Alamo Bowl in San Antonio. The last season the Longhorns didn’t lose a neutral game was in 2008, when they knocked off No. 1 Oklahoma in Dallas during the regular season and then bested No. 10 Ohio State in the Fiesta Bowl in Glendale, Arizona.

UCLA, on the other hand, is 3-5, or 38%, in neutral games since 2004. Before beating Virginia Tech in last season’s Sun Bowl in El Paso, Texas, the Bruins hadn’t won a neutral game since 2009 when they knocked off Temple 30-21 in the EagleBank Bowl in Washington, DC.

Central Florida has only played in six neutral games in the last decade, posting a 3-3, or 50% record. That said, the Knights are 3-0 since 2010 and haven’t dropped a neutral game since 2009 when they fell 45-24 to Rutgers in the St. Petersburg Bowl in St. Petersburg, FL.

Ole Miss just so happens to be one of only a handful of teams that haven’t lost a neutral game in the last decade. Of course the Rebels have only played in four such games since 2004, but they are 4-0. Ole Miss hasn’t dropped a game on neutral ground since 2000 when West Virginia triumphed 49-38 in the Music City Bowl in Nashville, TN.

The playoff committee should place negative weight on Alabama’s weak non-conference schedule AND its avoidance to travel for a home-and-home series (unless it is to Penn St). A neutral game every season in Atlanta/Arlington is a scheduling sham.

I feel it is a great recruiting tool that is good for both schools that attend it.

I agree with Day – there are too many advantages to the neutral site game. With neutral site games, SEC rules dictate that you can give tickets to recruits and their families. They have to pay travel expenses, and can’t have any contact with coaches while there, but – from what I understand, there are no limitations to this. I can give tickets to my top 20 recruiting targets and their families, while they watch our team dominate a big-named opponent in Cowboys Stadium, the Georgia Dome, etc., etc. On top of that, ticket revenue is split 50-50. Neutral site games just make too much sense financially and recruiting. Now, you have to forgive Bama a bit for the WVU game – at the time the game was scheduled, West Virginia was a perennial Top-15 team. You really can’t predict how a team is going to fare 3-4 years down the road.

Sure at the time they scheduled WV when they were a top 15 prospect and true one can’t predict where a team will be ranked 3-4 years, however, they still should of scheduled better than they did. There is no excuse, especially when 1 team you schedule isn’t a for sure quality opponent down the road.

I am sure they will punish them for it but they have plenty of other team that will have weak non conference schedules. Baylor for example is a joke. I am sure when you factor in all of Alabama’s games they have a decent strength of schedule. Most people forget there are 12 games total (plus possible conference title game), why focus on a few instead of the whole.

Baylor’s scheduling is a sad joke. For this decade to only have 2 games scheduled with any P5 or BCS team (Duke in 2017/2018) should preclude Baylor from any play off talk. The Baylor fans are a bit touchy when they hear about the scheduling decisions Art Briles and the Baylor AD have been making since he got to Baylor. I hope everyone gets their tickets for the Incarnate World game at Baylor 2019….It is never to early to line up the cupcakes.

Back to the topic is some form, I would love to see the neutral site games be more of a match up of some of the best teams. I love the fact the first week of CFB there are some programs which will play real games on week one. These are the games and teams that we will talk about leading up the start of the season, while most big tome programs are playing 1-2 practice games to start the. season.

What about A&M/Arkansas in Arlington? Last I went to one of those it was about 50/50 in the stands.