Which bowl games were watched the most? 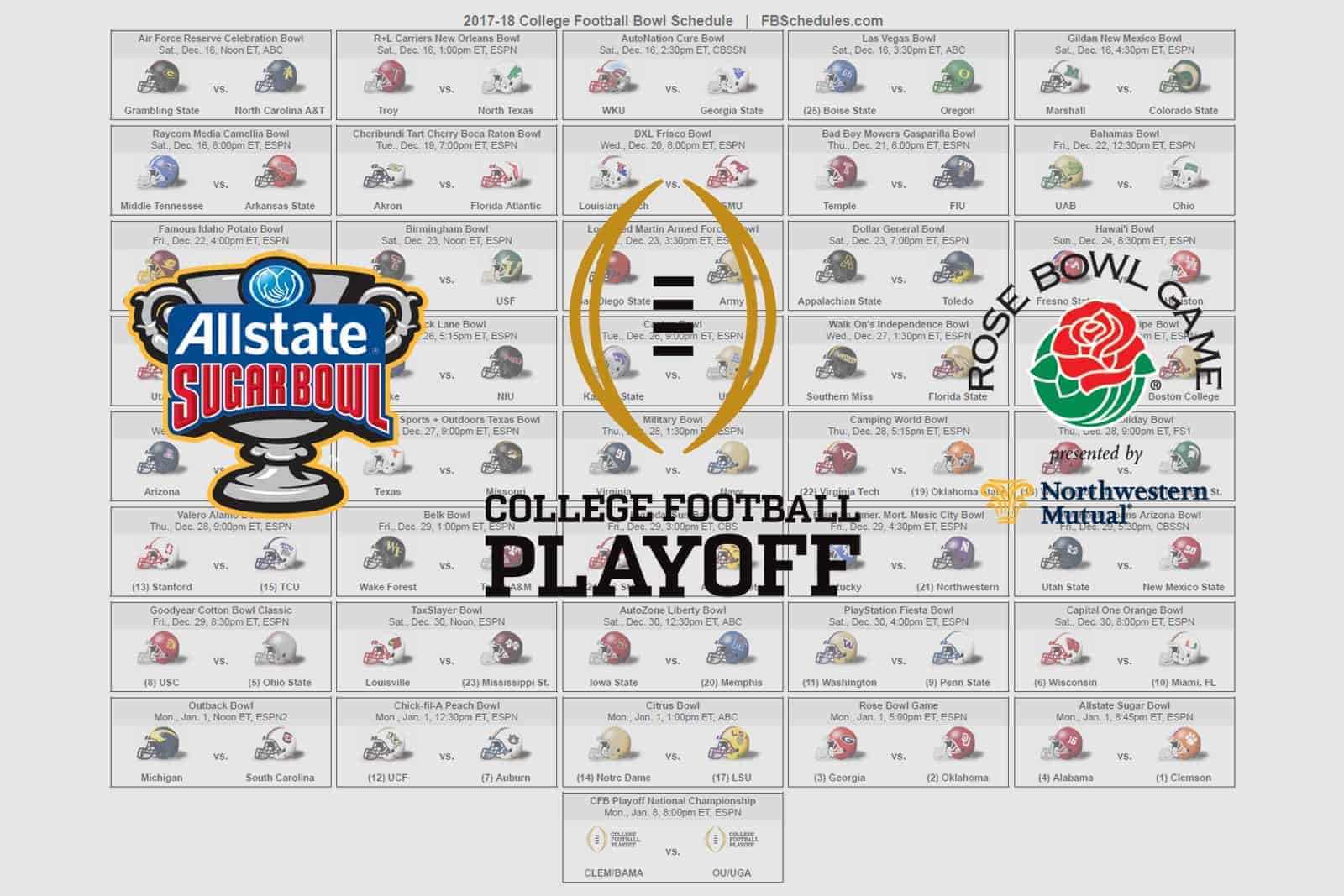 Though there were plenty of empty seats in this past season’s bowl offering, how many viewers across the country tuned in?

According to Sports Media Watch, which tracked TV ratings for 36 FBS bowl games, over 200 million people switched on their sets this year.

It’s no surprise that the most-watched game was the CFP National Championship (No. 4 Alabama vs. No. 3 Georgia) on Monday, Jan. 8 on ESPN, drawing 28.4 million viewers. The least-watched was the Camellia Bowl (Middle Tennessee vs. Arkansas State), drawing only 1.187 million viewers on Saturday, Dec. 16 on ESPN.

Excluding the six-rotating CFP bowls (the Sugar, Rose, Peach, Fiesta, Cotton and Orange Bowls), here are some interesting takeaways among the 30 “other” games listed:

Most watched bowl on a non-holiday weekday: Music City Bowl (No. 21 Northwestern vs. Kentucky), Friday, Dec. 29 on ESPN, 4.626 million viewers.

Though the numbers by themselves are interesting, how does bowl viewership compare with the number of people who tuned in during the regular season?

According, again, to SportsMediaWatch.com, here are the top five most-viewed regular season games of 2017 (including the conference championship games).

Overall, only three bowl games outdrew the top regular-season game in viewership – and those were all associated with the CFP bracket (the Sugar and Rose semi-finals and the National Championship game). In other words, no non-bracket bowl game attracted more viewers than did Alabama at Auburn in Week 13. And, rather than being literally the only game on TV, the Iron Bowl was one of 43 games played that Saturday.

Of the three teams mentioned twice in the top five of regular-season viewership, two drew in more viewers in their regular-season highs than during bowl season:

Ohio State had 9.468 million tune in to its Cotton Bowl appearance vs. USC. Compare that to the 10.15 million it drew at Michigan and the 12.92 it garnered in the Big Ten title game vs. Wisconsin.

Auburn had 8.377 million viewers watch its Peach Bowl appearance vs. UCF (the least viewed of the six rotating CFP bowl games). Compare that to the 13.47 million who tuned in for the SEC title game vs. Georgia and the 13.66 million who watched the Iron Bowl vs. Alabama.

As for the Crimson Tide, their top regular-season viewership numbers fall considerably short of what they enjoyed in their bowl appearances only because they were in the CFP bracket. Again, it illustrates the power of games with actual meaning.

On the flip side of the equation are the smaller schools, who don’t enjoy as wide of a national audience during the regular season.

For example, take Troy, which squared off with North Texas in this season’s New Orleans Bowl, Saturday, Dec. 16 on ESPN. That game drew 1.327 million viewers, or 33rd of the 36 FBS bowls listed.

Except for the LSU game, the Trojans picked up one-million additional viewers by earning a bowl bid.

The Hawkeyes played Boston College in the Pinstripe Bowl on Dec. 27 on ESPN. The game drew 4.008 million viewers, No. 14 of the 36 FBS bowls listed

Iowa picked up more viewers in its bowl – against a 7-5 opponent from the ACC – than it did in all but two of its regular-season TV appearances. And those games were both against top five ranked teams – (4) Penn State and (3) Ohio State.

The bottom line is – except for in extreme cases where top ten teams are squaring off for a chance at a title, FBS programs draw additional viewers during bowl season. Additionally, meaningful games generally outdraw those without any true consequences. Finally, if you’re out shopping your bowl game to a television network, a deal with a member of the ESPN/ABC family will pay off, big time, in viewership.

Great article!
So the people that complained that having two southern SEC teams in the championship game would draw no audience in certain parts for the country was basically wrong! It went up from last year. In the top 5 was basically SEC & BIG championships, a neutral site game, The most important game of the season Buckeyes vs Wolverines then the Iron Bowl came in as #1, I’ll take it! The Ohio State vs Michigan will always be up there no matter what but it just shows you the meaning of college football & where the passion lies.