Which Annual Non-Conference Rivalry Games are the Most Competitive? 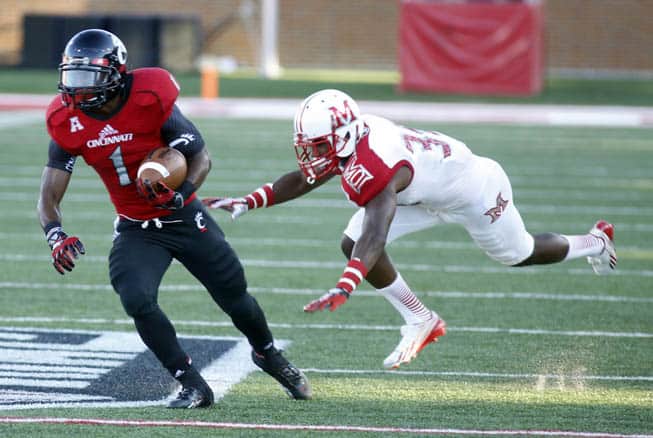 One scheduling element makes the SEC East more difficult than the SEC West—annual rivalry games with teams from other major conferences.

Where the entire SEC West can schedule non-league games with teams from any conference, Georgia, South Carolina, Kentucky and Florida all have a regular meeting with a big-time rival from the ACC.

This of course means that the four ACC schools involved must play an SEC team, every year.

The result is a major imbalance in strength of schedule—especially when it’s a competitive matchup—and it’s one of the reasons the SEC will require its members to play at least one “major non-conference game” beginning in 2016.

Here’s a look at 12 of the annual, non-conference rivalry games in college football, ranked by all-time competitiveness.

Colorado and Colorado State’s 87-game series started in 1890. It has been dominated by the Buffaloes who hold an overwhelming 2,115 to 1,007 advantage in all-time points.

In 2014, the Buffaloes and Rams will meet in the season opener on Friday, Aug. 29 in Denver.

Though Michigan-Notre Dame seems a lot sexier than the Irish taking on the Boilermakers, Notre Dame has faced Purdue twice as many times as it has the Wolverines.

This year’s meeting—a Week 3 game in Indianapolis—marks the 85th time that the Boilermakers and Irish have battled for the Shillelagh Trophy (not to be confused with the Jeweled Shillelagh that Notre Dame and USC play for).

The Lobos and Aggies first clashed on a football field in 1894 in Albuquerque, a game New Mexico won 18-6.

The 105th meeting between New Mexico and New Mexico State is slated for Saturday, Sept. 20 at Aggie Memorial Stadium in Las Cruces.

The Cyclones and Hawkeyes will battle for this year’s Cy-Hawk Trophy on Saturday, Sept. 13 in Iowa City.

Georgia and Georgia Tech have been dishing each other a heaping helping of “Clean, Old-Fashioned Hate” since 1893.

The rivalry will be celebrated for the 109th time this season when the Yellow Jackets travel an hour northeast to Athens to face the Bulldogs on Saturday, Nov. 29.

Last 10:  Marshall is 6-4 but have lost the last three straight.

The Thundering Herd and the Bobcats first squared off to “Battle for the Bell” in 1905 and have met 57 times since then.

This season Ohio will travel across the state line to Marshall on Saturday, Sept. 13 for a Week 3 non-conference showdown.

Last 10:  South Carolina is 6-4 and have won the last five straight.

The Palmetto Bowl kicked off in 1896 when the Gamecocks beat the Tigers 12-6 in Columbia. The game was played exclusively in Columbia until 1960, when the venue began to alternate with Clemson.

The 112th edition of this storied rivalry is scheduled for Saturday, Nov. 29 when South Carolina will travel to Clemson.

A relatively new rivalry, the Gators and Seminoles first squared off in 1958 in Gainesville, a game Florida won 21-7.

The 59th meeting between the two powerhouses from the Sunshine State will happen in this season’s finale, Saturday, Nov. 29 in Tallahassee.

USC and Notre Dame have been duking it out for the Jeweled Shillelagh since they first met in Los Angeles in 1926, a contest the Irish won 13-12.

In 2014, the two powerhouses will clash for the 86th time when the Irish travel to the West Coast to face the Trojans in the regular-season finale on Saturday, Nov. 29.

The Cardinals and Wildcats have played for Governor’s Cup honors on 26 occasions. The series began in 1912 and after six early meetings took a 70-year hiatus until it was re-established in 1994.

In 2014, Louisville and Kentucky will play for in-state bragging rights on Saturday, Nov. 29 in Louisville.

Though SMU and TCU spent almost 80 years as fellow members of the Southwest and then Western Athletic Conferences, ever since 2001 they’ve met as non-conference foes.

The Mustangs and Horned Frogs will fight for possession of the Iron Skillet for the 94th time on Saturday, Sept. 27 in Dallas.

The Battle for the Victory Bell dates all the way back to 1888, when Miami and Cincinnati’s first game ended in a scoreless tie in Oxford, Ohio.

Since then, the two programs have met 118 times resulting in what is one of the most closely-contested long-term rivalries.

In 2014, the RedHawks will travel 45 minutes south to Cincinnati to face the Bearcats on Saturday, Sept. 20.

Chip, they call it math! Look at his % included in the rankings.
Otherwise, I would make FSU – Florida as #1.

The games are ranked by winning percentage. The closer the series, the higher the ranking.

Uh, Notre Dame has won three of the last four over the trojans.

What about BYU Utah

Notre Dame and Purdue aren’t playing next year, yet you have them on this list of “annual” rivalries.

Every rivalry on the list is played through the upcoming season. That’s what she looked at.

Right, it’s not a non-conference game either for purposes of this article since both are Independents.

The intro specifically mentions conference teams having to play non-conference rivals. That’s what this article is about, nothing more.

Cool idea for an article Amy!

Army-Navy is left off the list despite not playing in a conference together.

PUR-ND play this year, which is a requirement of the article as the date is listed for each game.

Army-Navy is not an “out of conference” game for purposes of the article.

Vince, the rankings are based on winning percentage, not personal choice.

JoePa nixed the series in the early 90’s because of petty selfishness. Ah, actually in fairness, Pitt had some fault in it as well, joining the Big East and not letting Penn State in.

Now, that JoePa is gone, the series starts up again in 2016. I can wait for you revised article in 2 years.

ps, might want to look up the Oklahoma-Nebraska series, one of the best college football ever had. I know, they no longer play, and that is a shame.

Aren’t you forgetting something? FSU-MIAMI?

From before the canes joined the ACC

These are current non-conference rivalries