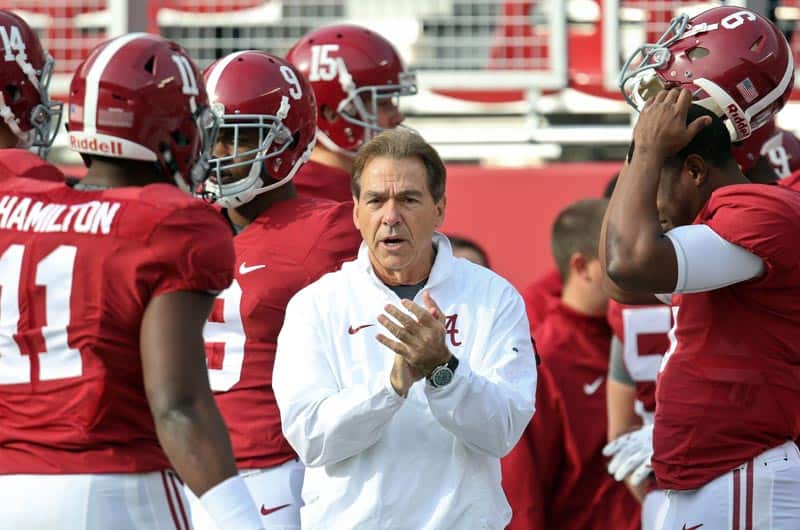 One-Game Wonder?
Ohio State sophomore quarterback Cardale Jones has started one game in his career for the Buckeyes and it was in the Big Ten Championship Game. Jones led the four-point underdog Buckeyes to a 59-0 win over Wisconsin that has Columbus in a frenzied utopia. The good or bad thing about his stats is that most of his success has come when the game is far out of hand.

Granted, much of these stats are heavily weighted by one game, thus, a pass completed when only winning by seven points quickly became passes thrown after taking a large lead in the Big Ten Championship Game. What may be the most important stat for Alabama’s coaching staff is Cardale’s lack of experience taking snaps while his team trails in 2014. By lack of experience I mean he has zero experience playing while the Buckeyes are losing. Jones played in the game versus Wisconsin while it was tied, but never while trailing. He came in against Michigan, but never while trailing. No team goes into a game wanting to trail or expecting not to score on their first drive, but it would be no surprise if Alabama puts a little more stock in getting up by seven points early Thursday night in the Sugar Bowl to put the Buckeyes signal caller in unfamiliar territory as soon as possible.

Poor Nick and Urb
Times are tough for Nick Saban. A playoff will require he coach his team for nearly two more weeks than he would have done in the old BCS system. Saban will lose even more recruiting opportunities with this distraction called the College Football Playoff.

Urban Meyer may awaken in the middle of the night to find himself face down on the floor suffering from throat spasms more than once with the possibility of two postseason games. This will also require Urban to spend even more time away from his family. Can you imagine if he wins? How can he be a father and a coach with all these extra games?

If Bear Bryant and Woody Hayes Discussed This Game Today
I decided I would call the Long Island  Medium — Theresa Caputo — so I could have a conversation with Bear and Woody. I started the conversation with what I thought would be the first of at least three or four questions. It was the only question I was able to ask.

FBSchedules: Wow. What an honor to be sitting here speaking with you guys. So lucky that the Long Island Medium lady from that show on the TV was able to get you guys to holler at us real quick. Thank you both for hanging out with us as we broadcast live from Ron Twerkum Motors. What do the both of you think about the BCS finally being extinguished in favor of the College Football Playoff?

WOODY: [Rolls in grave] WOOOOOOAAAAAAAAAAAAAH. Me too, Paaawwwwl. Me too!

Dang. That did not go at all like I expected, but those responses were so Bear Bryant and Woody Hayes. I will be in talks with Whoopi Goldberg from Ghost next year. Whoopi got it done with my boy Swayze when Demi was trying to holler at him on the other side. I should have known better.

Why Ohio State Pulls Upset and Destroys State Of Alabama’s Will To Live
It has been well-established in 2014 that Alabama’s secondary will allow a big play or five per game. What they don’t do much at all is allow long, time-consuming drives that result in touchdowns.

Auburn was successful against the ‘Tide between the 10’s, but could only muster a field goal on long drives. Auburn scored 44 points on Alabama’s defense because they were able to turn the big play into more than just a large gain. They scored on said play. Auburn fans will enjoy remembering the end of the half where Sammie Coates goes up and makes a tremendous catch at the two yard line on the trickeration play, but he didn’t get in the end zone. Auburn had to kick yet another field goal rather than take a commanding two-possession lead into halftime.

Missouri’s only yards in the SEC Championship came on plays that were extended by the scrambling ability and strong enough arm of Maty Mauk. Alabama fans were up in arms because Jimmie Hunt would find his way to a desperately thrown ball before an Alabama defender could recover. Missouri fans were up in arms because they had no punchline for the setup. As the field shrinks, so are the the offense’s confidence and play selection. Missouri had three plays of 32 yards or more through the air and they were all on plays that had broken down and Mauk was chased out of the pocket. That’s not a ton of big plays, but when you force the quarterback out of the pocket, you would expect your defense to do something other than give up plays of 32, 63, and 47 yards. Can Cardale pull a Maty three times in New Orleans?

Let’s skip back to November 15 when Dak and Mississippi State traveled to Bryant-Denny Stadium. Two of Dak Prescott’s three interceptions in Tuscaloosa came deep in Alabama territory (one in the end zone and one inside the 20) in the second half. This would be a great time to reference Dan Mullen not being able to “freakin’ sleep” because of this, but I’m going to leave it alone.

When Ohio State destroyed Wisconsin 241-0 in the BIG Championship Game, they scored on the big plays. Well, they scored on every play it seemed, but they did more than just get a ton of yards when they broke off a big run or big pass. They completed the play and got six.

It sounds so overwhelmingly simplified, but Ohio State has to turn the big gain into a big gain that results in a touchdown. If they can do that, the crimson portion of the state will be using their houndstooth-hatted head to headbutt and break every Bear Bryant commemorative plate in the house [enter random TRAILER PARK reference here].

Why Alabama Will Have Folks Watching Big Bang Theory Reruns by Halftime
Alabama is arguably the best team in football. They defeated then-No. 1 Mississippi State in Tuscaloosa. They beat a fired up LSU team at night in Baton Rouge in a game that appeared out of reach. They scored 55 points on Auburn on a night Blake Sims spent one-third of the game hitting every wide open Auburn defender in the hands with the football. They beat a very stingy Arkansas team by one point in a game that everyone tied to the Alabama program considers the turnaround game of the season the week after the Ole Miss loss. In other words, unless you’re Ole Miss and you can catch Alabama in a late-game collapse, there’s not much chance of beating the ‘Tide.

There’s not a scenario this team has yet to face in 2014. Urban Meyer has the offensive chops to show something that Nick Saban and Kirby Smart have never seen. Then what? Saban has added a stealth weapon in Lane Kiffin that can do the same to Meyer’s defense. There may be an NCAA rule against Nick Saban-led Alabama teams possessing both a Kirby Smart defense and a Lane Kiffin offense. Unless the Buckeyes can do what Gus Malzahn can do with Auburn and that’s get Alabama’s defense so concerned about the run that receivers can get in one-on-one situations with ‘Tide defensive backs, Alabama will turn the Buckeyes into a one-dimensional train wreck.

Saban lost to Urban Meyer and Tim Tebow in the 2008 SEC Championship Game. By the time the rematch with the top-ranked and undefeated Gators had come to a close in the 2009 edition of the same game, Tebow Tears were falling to the ground, causing grass to grow on field turf and Urban Meyer decided he needed some family time to figure out what he wanted to do next. Saban then smacked around Urb’s final Gator team in 2010 at Bryant-Denny Stadium, holding Florida to two field goals.

Urb will need to bring some new kindling to the fire if he want’s to burn Saban.

PREDICTION
You can decide for yourself which of the two above scenarios you feel are more likely to occur. Alabama is 1-2 under Saban in the Sugar Bowl/BCS Championship Game in the Mercedes-Benz Superdome. The key to that one victory is it was the only game in New Orleans that counted for more than a consolation prize. Alabama lost to Utah and Oklahoma in the 2009 and 2014 Sugar Bowls respectively, but shut out the best LSU team Les Miles (or any other Tigers coach) has ever coached, 21-0, in the 2012 BCS Championship Game. The ‘Tide held LSU to under 100 total yards and the Tigers crossed midfield one time.

This one won’t be a shutout, but Saban and the ‘Tide have a penchant for destroying teams in January when there’s something on the line.
FINAL SCORE: Alabama 44, Ohio State 21

Hahahaha. You really don’t know too much about college football, do you? Find a new job, Eric.

I agree. What an egotistical idiot.

Wow. Just stumbled upon this gem. Better luck with your pick next time, Eric.

Whoops! Saban and the Tide effectively put Cardale Jones on the map. The stuff legends are made of. Roll Tears!

Just read this for the first time. You really need to realize the SEC isn’t as good as the media thinks. The days of playing OOC cupcakes and only playing the “tough” SEC are over. There’s a playoff now and the SEC has been exposed. Get over it Eric.

Forgot the 3rd scenario. tOSU runs the ball down the dominant Alabama throats

WTF Eric. R U really getting paid for your predictions?

Pleasepaulwest66ont be too hard on him. Bama his him snowed just like they have the whole FBS.
We should all say a little prayer for the sec so they dont go home and cry again.
GO BUCKS AND THE BIG TEN.

Idk whats worse. The prediction or the fact that only 12 other people on earth give a shit to comment on your work…

Any particular reason you are commenting on a nine month old article?

Yes our tears are really rolling now! I still can’t figure out why Ohio state fans are so arrogant?!?! Where Waldo.. Duh huh… U ain’t win crap but one championship!!! U got alot of catching up to do Yanks!!!! We’ll be back in there playoff next year, y’all probably gonna lose to Michigan, or Mich St this year and get left out again! Lmfao…. Where were them mouths at when y’all got destroyed by Florida in 06′ & LSU in 07′? U barely beat BAMA by 7 last year for your first win against the SEC in a bowl all time!!! So why are y’all so arrogant? Hahshahaha

I thought Alabama would crush ohio state but ohio state won. and just to tell you I am a buckeye