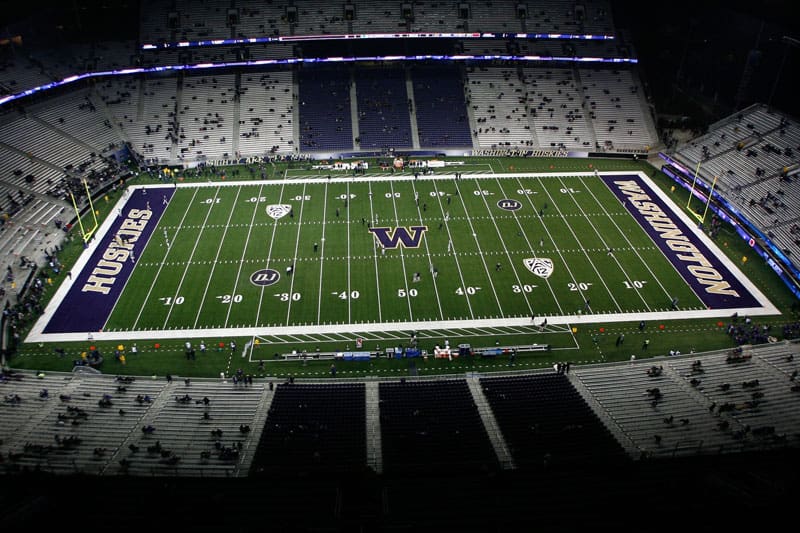 The Washington Huskies have scheduled future home-and-home football series vs. the BYU Cougars and the Michigan Wolverines.

“We are excited about our future football schedules,” Washington director of athletics Scott Woodward said. “Our goal is to win championships, and we will continue to work to supplement our challenging Pac-12 slate with games that are both exciting for our fans and beneficial for our program.”

Washington will host BYU at Husky Stadium in Seattle on Sept. 29, 2018. The Huskies will then travel to face the Cougars at LaVell Edwards Stadium in Provo on Sept. 21, 2019.

Washington and BYU have met nine times in a series that dates back to 1985. The Huskies hold a one-game lead in the series (5-4) and took the most recent meeting 31-16 in the 2013 Kraft Fight Hunger Bowl.

“We’re excited to announce this series with the Huskies,” said BYU director of athletics Tom Holmoe. “Washington has a great football tradition and they fit well with our philosophy of scheduling regional games. It gives our fans in the Pacific Northwest an opportunity to see our football team play live.”

The Michigan Wolverines will visit Washington’s Husky stadium in the first of a two-game series on Sept. 5, 2020. Washington will then return the trip to Michigan Stadium in Ann Arbor on Sept. 18, 2021.

Michigan and Washington haven’t met on the gridiron since a 2002 matchup in Ann Arbor. The Wolverines nipped the Huskies 31-29 in that game to extend their overall series lead to 7-5.

“We are excited to rekindle a rivalry that has showcased some great games and great teams for both programs,” said Brady Hoke, U-M’s J. Ira and Nicki Harris Family Head Football Coach. “There have been some exciting, down-to-the-wire football games between Michigan and Washington and we anticipate the same type of contests when this series is played at the outset of the next decade.”

Washington also announced today that due to a conflict with the Big Ten schedule, Wisconsin canceled the home-and-home series that was scheduled for 2018 and 2021.

Washington now has their future non-conference football schedules almost completely set through the 2021 season. They only need one game each in 2017, 2020, and 2021.

Per their release, the BYU Cougars now have “22 future games scheduled with nine different teams from the Pac-12 Conference from 2014 through 2025.”

BYU may be over scheduling tough games. Playing 5 P5’s plus Boise State and usually another 2 decent mid majors every year like NIU, Fresno St, ECU means they might find themselves not bowl eligible some years. Look at 2015, the irst 4 games include 3 teams that will likely be ranked Michigan, Nebrasks, UCLA and they also have Boise week 2 which is a team that has had their number and week 5 is ECU. They will underdogs in all of those games except ECU, which will be a toss up.

Yeah, ’18 and ’19 are looking great for BYU. Great to see more home and homes as well. They’ve got to kill these upcoming schedules in the next couples of years that should be easier for them.

BYU is definitely over-scheduling compared to its history. However, there will still be plenty of Hawaii, UNLV and SJSU type games to pad the win-loss record. BYU could go 3-5 against the currently scheduled 2018 opponents and still finish bowl eligible with the lighter part of the schedule.

Overall, I think the more competitive schedules will get BYU’s fan base excited and will give BYU a chance at the CFP if they have a magic season. Right now, BYU could go 12-0 and still whiff on the CFP because of lack of marquee games.

Michigan is going to be playing 11 P5 opponents in 2020 and 2021 as they have 9 conference games and OOC Vtech and Washington.

Schoup. don’t get too excited because BYU plays 5 P5 teams. Each P5 plays a minimum of 8 or 9 P5’s. 9 or 10 is the norm. That’s pretty good for a mid-major but nowhere near enough to be considered a playoff hopeful.

They have to make room for Wake Forest, NC State, Duke, Pitt, and Boston College on the schedule and usually have at least two cupcake OOC opponents, often FCS, MAC, and Sun Belt level opponents. At most, there are 3 or 4 upper-tier games.

The biggest difference is that they can claim that Wake Forest, Kansas, and Indiana are “Power 5” opponents, where in reality, Boise St., Utah St., and Northern Illinois would actually be tougher competition.

BYU needs to load up September. The only way to get a P5 teams to work with them on an October or pre-Thanksgiving November date is for September to already be booked and that opponent needing a quality game enough to co-operate.

Huskies vs Wolverines!!! I will be there!!!! This is really exciting and their my two favorite teams.

Regardless of this, most years, U Dub’s non-conference schedule has two patsies and they are loaded with Div I-AA schools throughout. Big 10 schools are shunning Div I-AA. I’m not impressed.

The Washington AD does not care what the fans say or think. he wants cupcakes- at least 2 every yea-this year there were 4 with Washington playing unmotivated against all of them except for Illinois. With the big 10 weak, we get Illinois and Rutger-Isn’t that great-2 of the weakest teams from a down league.