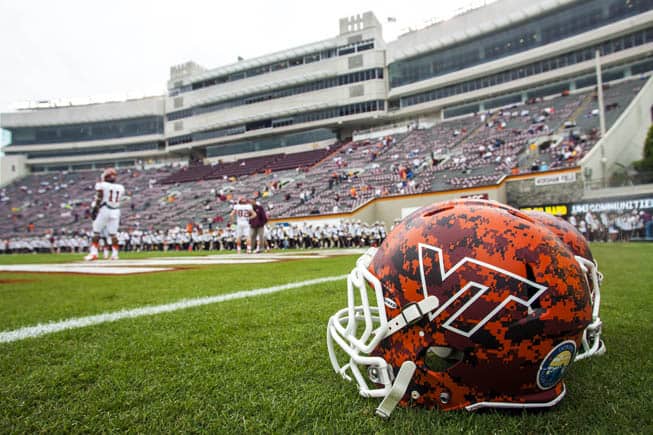 The Virginia Tech Hokies and the Old Dominion Monarchs have scheduled a long-term football series, The Virginian-Pilot has reported.

With the new four-game agreement, Virginia Tech and Old Dominion will meet a total of seven times between 2017 and 2025, with four games in Blacksburg and three in Norfolk.

“What a great day this is for ODU, for our program and for our fans,” ODU athletic director Wood Selig told the Pilot. “This is a great harbinger of where we think we can go with our scheduling.”

Old Dominion is currently transitioning from the FCS to the FBS and is set to officially join Conference USA on July 1, 2014.

Virginia Tech is the first announced non-conference opponent for Old Dominion for each season between 2022 and 2025.

Maybe Florida or Florida State should sign some home and homes with Florida Atlantic so the fans can see that part of the state. Lmao

agree VTU maybe that 7 game series should have 6 at VTU and one neutral at the Skins or Ravens stadium,,,that’d be like UF Scheduling Stetson for a 4 &3///nonsense

Public schools in the same state should always schedule each other for games. It’s good for the in-state economy. VT does the right thing with scheduling this series.

Do not like VT, but like this choice. VT plays teams like James Madison and other non FCS teams so why not schedule an FCS school that is just a short drive away.

ODU will be a full-fledged 1-A team next season

Do not like VT either but i couldn’t agree with Bill more, Tech playing in that area is huge for them because that is their prime recruiting zone. Very smart move for both schools.

Im a fan of both, living in va beach and my daughter goes to VT. By 2017 ODU should start being a contender. Looking forward to this series.

A contender for what? Last in their conference?