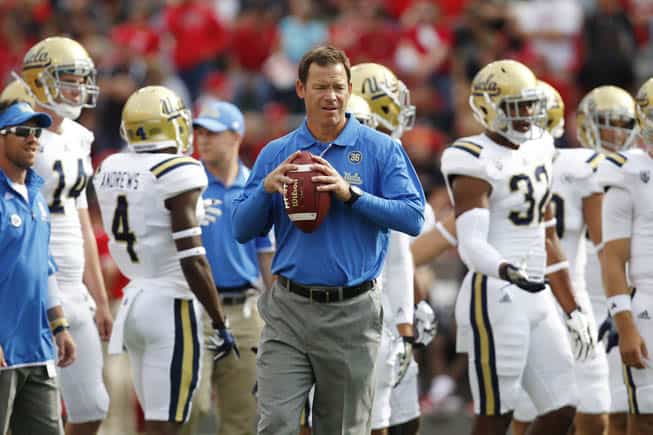 The UCLA Bruins and the Rutgers Scarlet Knights have each updated their future football schedules, including the postponement of their home-and-home series to the 2020 and 2021 seasons.

In addition to a 2016-17 series vs. Texas A&M, the Bruins have also scheduled a home-and-home series with the San Diego State Aztecs. UCLA will host SDSU at the Rose Bowl on Aug. 31, 2019 and will travel to face the Aztecs at Qualcomm Stadium on Sept. 19, 2020.

UCLA’s future non-conference schedules are now complete through the 2017 season and include other big-name schools such as Texas, Virginia, Oklahoma, and Michigan.

To fill the void left by moving the UCLA series, the Rutgers Scarlet Knights have scheduled a home-and-home series vs. the Washington Huskies. Rutgers will travel to Washington on Sept. 3, 2016 and will host the Huskies on Sept. 2, 2017.

Didn’t the Big Ten have its teams stop scheduling 1-AA schools? Why is Rutgers able to add Howard and Morgan State?

The big ten only suggested it, there is no rule.

There is a rule that will take effect after the 2017 season. Each school will play I believe, 1 or 2 extra crossover games starting in 2018. I remember reading somewhere there will be 9 B1G games on everyone’s schedule each year.

Rutgers has one of the hardest schedules in the nation let alone the BIG with Nebraska, Wisconsin, Michigan, Michigan St, Penn St, Maryland and lets not forget Ohio St.
Dirty Jersey is ready to shock the world!

When does the rocking start? It looks more like they are being throttled. What say you? Rutgers is another cupcake for the Big10 powers, just like Indiana and Illinois. Look for Rutgers to blown out 3-5 times every year. You were very fortunate to be added. What got you in was your TV market. Rutgers has been one of the biggest, if not the biggest underachiever in the history of college football. Look for their under performance to continue.

The truth is that Rutgers went 8-5 in its fist year in th B1G which did shock the world!