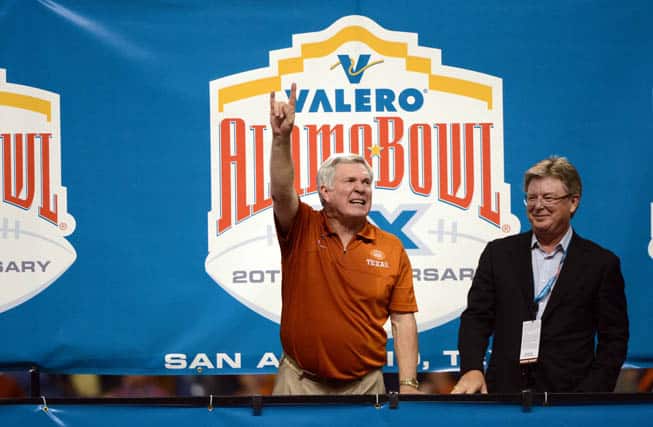 In our preseason “most anticipated games” series, most of the games on the agenda provided great excitement. So as we pat ourselves on the back, we move on to examine the post-season.

Scheme, pro-prospects and tradition rich match-ups litter the bowl schedule. Let’s clean-up some of the mess and countdown the top 5 bowl game match-ups this season. Two house-keeping notes, if you will: the BCS Championship game will not be on the list due to it’s obvious placement at number one. Also, remember these are games we see as the best match-ups that will result in the best games. These games are not necessarily the ones with the highest ranked teams.

We mentioned professional prospects, and this game has two big ones that will square off. The Cougars’ Kyle Van Noy will have the opportunity to help his draft stock against the Huskies’ Bishop Sankey. Both teams rank in the top fourteen in the nation in rushing which should translate to some points. If the same BYU scheme shows up in California that showed up against Texas, Taysom Hill could have a field day. Look for a lot of big plays on the ground and a barn-burner in San Francisco.

Remember Mack Brown! Oregon is the better team, but Texas will come to play for their coach. All eyes will be on Mack Brown’s last game at the helm for the Longhorns and I believe his players will play with maximum effort and emotion which could be enough to keep Oregon on its toes. The high-powered offense of Oregon should be the story, but Jackson Jeffcoat and the speedy Texas defense should be able to at least limit the offense. This one will be lower scoring than you think. If there are football gods, Texas has to win, right?

If you like points, don’t miss this one. The Cowboys and Tigers’ offense ranks fifteenth and sixteenth in the nation in points scored, respectively. Mike Gundy’s defense will be the key here. It allowed just twenty points a game in the offense-happy Big 12, but this Missouri attack is a different animal. The Tigers visit their old conference in a post-season tilt for the ages where the over/under should be in the nineties.

In their last two games, the Ohio State Buckeyes have surrender over 1,000 yards of total offense. The Clemson offense is a lot better than any Ohio State has played all year, and the Ohio State offense is right behind Florida State on the list that Clemson has played against this year. Both defenses were tested, and when tested gave up big numbers. With Braxton Miller and Tajh Boyd both very good runners, one defense will need to figure out how to stop a running quarterback to get an edge. Whoever has the ball last should win this shootout.

To round out your bowl season, Stanford and Michigan State should be the equivalent of a heavyweight title fight. If you like old-school, battle in the trenches football, this is the game for you. The Spartans boast the 4th ranked defense in the nation, where as Stanford brings the 10th ranked unit from Palo Alto. You’ll never see more I-formations in a bowl game ever again. This is your grandfather’s Rose Bowl.

I’m also looking forward to the Sugar Bowl between Alabama and Oklahoma after Bob Stoops remarks about the SEC at the beginning of this season.

Okay, first off. The Alamo bowl will NOT be a close one. Yeah, okay Texas will play their best game because it’s Mack Brown’s final game. But if you think about it, Texas should have played their best all season long. (Just like Arizona against Oregon)

Got to agree with sec writer. Sugar bowl should be great game. Two big time old school teams. And Rose bowl? Gotta love two great defenses seeing who can do the best job stopping the others offence.Two yards and a cloud of dust!! ROLL TIDE!! Happy Holidays y’all.

I’ve been wrong before, but I’ve got a feeling Fsu crushes Auburn, the BIG 10 takes 2 of 3 from the $EC this coming New Years Day. Wisconsin will crush South Carolina (Gamecocks have not looked great for most of this whole season except for 2 games this year), and I’ve got Iowa over Lsu. People forget Iowa has done well against $EC schools and Lsu is without their QB. Surprised Lsu was a 8 point favorite going in and people forget they didn’t have the best of seasons this year. LSU was also a young team. Too much young talent to overcome. Georgia vs. Nebraska is more of the toss up between the 2 as Georgia had plenty of injuries. Cant see them winning by 10 and this years Georgia is far from last years. Slight edge to Georgia but very Winnable for Nebraska. The only $EC I see winning Big is Alabama over Oklahoma. Cant just assume the $EC will win their Bowls every year. It’s about matchups and the injury situations are a concern for both Georgia and Lsu which was why I don’t see either winning much less covering the spread. In the Cotton Bowl between Okie State and Missouri anything can happen. Just my 2 cents. This will be a Bad year for $EC for Bowl Games.

I would also never have picked the Alamo Bowl as 1 of the 5 Best Bowl games. Oregon and should they bring their A Game, will crush this Texas team. The only reason this game is being listed is because there’s more of a chance Oregon let’s down given they’d rather be in the BCS, than playing in San Antonio Tx and this game is a Home Game for Texas and Mac Brown. Alot more will hinge on what Oregon team shows up than anything else.

I couldn’t have said that any better… :)

you people kill me,you have so much hatered for them country boys down south,to ever admit that the sec is collage football,you will be shown again this year,but wont learn,be talking the same shit next year,fl state should not even be there there schedual was a joke most no better than highschool teams

You make me sick.

Tony. Can’t even spell college. What the hell are you talking about. Florida State is by far the best football team of 2013. Alabama is pry the only team that can play with Florida State. But thiers no way that they would beat them. Win the games that you need to win to get their and shut your mouth If you don’t.

This whole thing makes me laugh… Tony argues that FSU does’t deserve to be in the BCS bowl, yet they won the game… He talks how SEC football IS “collage” football when the SEC didn’t win big this year and lost to an ACC school. Also, lets be honest here. The SEC is a “power” conference for one reason. Alabama. It really is that simple. Alabama is an outlier though. SCAR is southern football. Clemson is southern football. Georgia is southern football. But not Alabama. They (up until this season) deserve a class of their own while Nick Saban is their coach.

whoah guy…you were about as wrong as you can be.