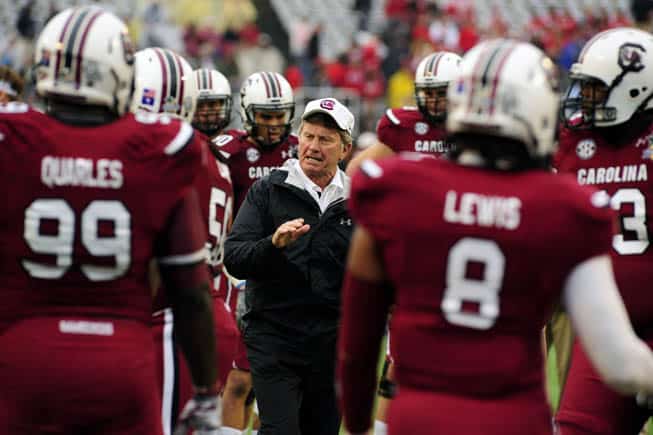 Although we’re still in the month of April, it’s never too early to get excited about the opening Thursday night of college football on August 28th. True, the FBS season officially kicks off the night before when Abilene Christian faces Georgia State on ESPNU, but week one really gets cooking with 13 matchups the following night.

Kickoff times and networks haven’t been officially confirmed yet for most of these openers, but that won’t stop us from ranking the top 10 opening Thursday night college football matchups.

1. Texas A&M at South Carolina
There will be plenty of storylines to go around when the Gamecocks and Aggies meet in an SEC showdown that seems more fit for early November than it does late August. The biggest question, of course, will be how the Texas A&M offense performs without Johnny Manziel. And why this will probably be the biggest point of intrigue, don’t forget that the Gamecocks are replacing solid, gritty quarterback Connor Shaw. For a game taking place in August, this could have serious consequences in the SEC.

2. Boise State vs. Ole Miss (at Atlanta, GA)
After eight incredibly successful seasons, including a classic 2007 Fiesta Bowl upset of Oklahoma, the Broncos will take the field without coach Chris Petersen who left during the off season to coach the Washington Huskies. Boise’s reputation of taking on challenging out-of-conference games continues when they travel to SEC country to take on the Ole Miss Rebels. Ole Miss’s highly touted 2013 recruiting class now has an 8-5 season under its belt, including a win over Georgia Tech in the Music City Bowl.

3. Rutgers at Washington State
It only took Mike Leach two seasons to turn the Cougars from a laughingstock into a bowl-bound squad in 2013. His offense was 4th in the country with 368 passing yards per game, although the running game could only muster a paltry 53.4 yards per contest.

Both Washington State and Rutgers finished 2013 with bowl losses resulting in 6-7 records. This opener is especially critical for a Rutgers school joining the Big Ten. During a four-game stretch later in the season, the Scarlet Knights play Michigan, Ohio State, Nebraska, and Wisconsin consecutively.

4. Temple at Vanderbilt
There’s one major reason to tune into this Vanderbilt/Temple matchup on the SEC Network — how will the Commodores perform after the departure of coach James Franklin to Penn State? Before Franklin arrived at Vandy three years ago, the Commodores had played in just a single bowl game in the previous 28 years. Franklin led his team to three straight bowl games, including back-to-back nine win seasons in 2012 and 2013. Vandy begins its new era versus a Temple Owls squad that went a disappointing 2-10 in its first season in the AAC.

5. Bowling Green at Western Kentucky
Perhaps no team was snubbed more during bowl season last year than the 8-4 Hilltoppers. They begin the post-Bobby Petrino era against a perennially tough Bowling Green Falcons team that finished 2013 with a 10-4 record, which included losses to Mississippi State by just one and to Pittsburgh by three in the Little Caesars Bowl.

6. Eastern Illinois at Minnesota
In 2011, the Golden Gophers fell at home to New Mexico State and North Dakota State. In 2010, it was embarrassing home defeats to South Dakota and Northern Illinois. Although the Gophers have done a better job the past two seasons handling business during non-conference play, they will open the season against an Eastern Illinois squad that demolished San Diego State on the road last year in the Aztecs’ home opener, 40-19. It will also be interesting to see if head coach Jerry Kill returns to the sidelines after reoccurring seizures sent him to the press box last year.

7. Wake Forest at ULM
Last season, Wake Forest was upset at home when a Demon Deacons pass attempt to the corner of the end zone fell incomplete with four seconds left. This 7pm ET, ESPNU rematch in Monroe will either give Wake a chance at revenge or result in another Sun Belt upset over the ACC.

8. Presbyterian at Northern Illinois
How in the world will Northern Illinois replace Heisman finalist Jordan Lynch? They’d better figure it out quickly, because following an opening matchup versus FCS foe Presbyterian, the Huskies are looking at three consecutive weekends on the road versus Northwestern, UNLV, and Arkansas.

9. Weber State at Arizona State
Call this the “Oregon State Beavers 2013 home opener better-be-careful” game. Last season, the Beavers were shocked on opening day to Eastern Washington in an embarrassing 49-46 defeat. The Sun Devils finished last season with two very disappointing losses — at home to Stanford in the Pac-12 Championship game and to Texas Tech in the Holiday Bowl. However, with the Weber State Wildcats coming off just a two-win season, it could prove to be just the medicine Arizona State needs to start the season.

10. Howard at Akron
Terry Bowden’s resurrection project at Akron continues to show signs of progress as the Zips ended the 2013 season with three consecutive wins to cap off a 5-7 season that included a near upset on the final play at Michigan. Before Bowden arrived at Akron two years ago, the Zips had compiled three straight 1-11 seasons. For his efforts, Bowden was rewarded late last season with a two-year contract extension running through 2018. The home opener versus Howard gives the squad a solid chance to start 1-0 before difficult road games in September at Penn State and Pittsburgh.

Wake game is in Monroe, correct? Not Winston-Salem……

Bowling Green lost to Mississippi State last season, not Ole Miss. Also that game (BGSU/WKU) has been moved from Thursday the 28th to Friday the 29th.

Good catch on the Mississippi’s Phil. Thanks.

Yes, in Monroe! Played in Winston-Salem last year. Final game in a home and home series.

This is the biggest game of the season for Boise State. It is against an SEC team in Mississippi that will be a good ( certainly not SEC championship material) match. It is Boise’s only game against a Big 5 (BCS) team all season and a loss after getting pounded by Washington, BYU and Oregon State in 2013, Boise needs to prove that it can compete with teams other than Mountain West, Sun Belt and AAC teams like UConn (3-9) in 2013. Continous 3rd tier bowl games against mediocre PAC 12 schools like the past 4 seasons is no way to build a national brand. Go Broncos!

It will definitely be a huge challenge for Boise State this season without Chris Petersen. Here’s hoping that they can win against Mississippi at the Georgia Dome. Boise State would have played Alabama in the 2011 national title game had it not been for their placekicker missing a field goal at the final horn against TCU. Which is painful reality because I have wanted (and would still like to see) Boise State win the National Championship some year.

Eh? No FSU at Louisville? Should be #1 on the list.

This list is for the opening night of the season, Thursday, Aug. 28 only.

We’ll being a HU grad I am going to enjoy the hospitality of Akron when I drive up from Columbus. Plan to leave a victor though. :)

Rutgers does play Michigan, Ohio State, Nebraska, and Wisconsin in a row, but they do have a bye week between Michigan and Ohio State. Not sure if that is something to be included or not, but should definitely be something known for those who are not aware.