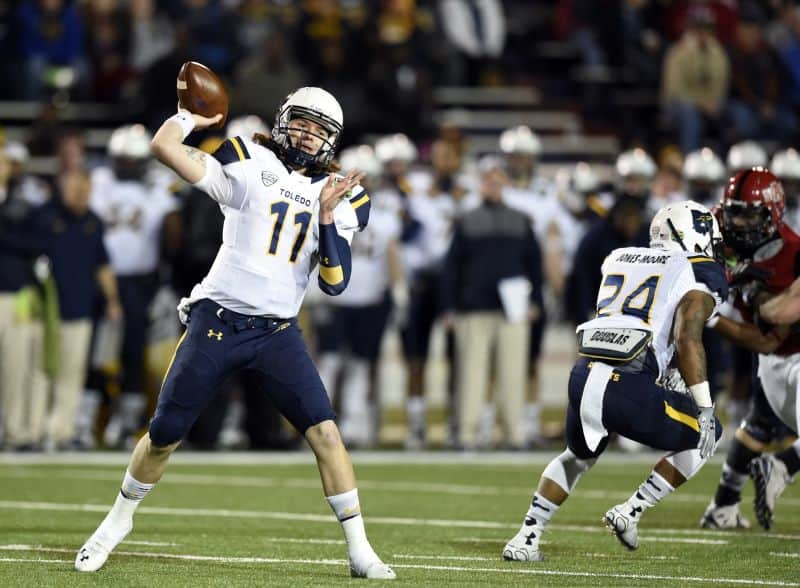 Toledo and BYU will play in Provo in 2016 and Toledo in 2019. (John David Mercer-USA TODAY Sports)

Toledo and BYU will meet in 2016 and 2019, the Rockets’ athletic department announced today.

“We are very pleased to add the series with BYU to our football schedule,” said Toledo VP and athletics director Mike O’Brien in the release. “BYU has an excellent football tradition and will be a very attractive opponent on our 2019 home schedule. We also look forward to making the trip to Provo, Utah next season.”

The schools have never faced each other on the gridiron.

Disappointing. BYU fans would like to see better opponents on its September schedules. We don’t mind BYU scheduling Toledo, but it makes no sense to schedule them in September. Those dates should be reserved exclusively for hard-to-schedule Power Five opponents, who typically won’t schedule BYU in October and November.

@Hank – Have you reviewed BYU’s 2016 schedule? You suggest throwing in a Power 5 opponent on Sept 30 following games @Arizona, @Utah, home to UCLA and then followed by @Michigan State, home to Miss St and then @Boise State with no bye weeks in between?

There is no program in America that would willingly do that to themselves.

Oh, I forgot vs. West Virginia in DC the week before. Again, scheduling a P5 opponent the week they scheduled Toledo would be insane

Hank…BYU plays 6 P5 opponents in its first 7 games. Arizona, Utah, UCLA, West Virginia, Michigan State, and Mississippi State–and then Boise State the week after Mississippi State. I was actually sort of hoping they’d use the September 30 game as a bye week. Another tough game is the last thing they need in that spot. BYU will have the hardest first 8 games in the nation–even with Toledo!

These are the holes created by the number of pay dates (Mississippi, Nebraska, Michigan) contracted early in independence and neutral games (LSU, Arizona, WVU, TCU) exceeding FCS home dates, this will even out by the end of the decade if no additional neutral site games are taken on. It would have been earlier but LSU neutral, Arizona neutral to get Michigan State, USC 2 for 1 taken and USU 2 for 1 given up to get Thanksgivings scheduled through 2023, Nevada 2 for 1 given up to schedule UCLA, etc. are hard to pass up.

Hank, I’m going to go out on a limb here and give you the benefit of the doubt by assuming there is no way in H-E-DOUBLE HOCKEY STICKS that you looked at the Cougars’ 2016 schedule before posting this comment. There are 5 games in September of 2016, with the 5th one being Toledo (9-4, GoDaddy Bowl). The four games before that? Arizona (10-4, Fiesta Bowl), Utah (9-4, Las Vegas Bowl), UCLA (10-3, Alamo Bowl), and West Virginia (7-6, Liberty Bowl). All P5 Schools with winning records and bowl trips last year. What more do you want from a September schedule? That will likely be the most difficult September schedule among ALL P5 programs in the country (2015 has already been called that, and 2016 is even tougher). And there’s still Fiesta Bowl winner Boise State (12-2) after that and two more P5’s in Michigan State (11-2, Cotton Bowl), and Mississippi State (10-3, Orange Bowl). In case you lost count, that’s SIX P5 teams, and the top G5 team in the country from 2014, all bowl teams, four of which participated in New Years Six bowl games. The average number of 2014 wins by BYU’s 2016 opponents? 8.27. Only one had a losing record (Umass at 3-9). Throw them out and that average goes up to 8.8. If you’re not satisfied with the quality of that schedule and the number of P5 opponents on it then nothing will satisfy you. That will be in the Top 10 most difficult schedules of 2016 among all FBS schools, including P5.

Excellent comments in response to my original comment. I bashfully admit that before posting, I hadn’t fully considered the difficulty of the first four games BYU has scheduled in September 2016. The same can also be said for the 2019 game at Toledo, which is also preceded by four games against Power Five schools.

Toledo is currently No.20 in the country. And, no they’re not always ranked, however, Toledo is never a push over. No, they’re not a Power 5 team, but they are still no easy task, nor will they hurt BYU’s already terribly hard schedule.

Darren,
I just looked that up.
That is a murderer’s row. Of BYU’s first 8 opponents, 6 will likely be ranked nationally. The Rockets and Utah probably won’t be, but they are still D1 programs that can knock people off under the right circumstances.
But the other 6 teams will be very tough to beat. That is brutal, who has a tougher first 8 games in 2016 than BYU?
I like this series. I don’t like our chances 2016 in Provo, but I like them in 2019!

BYU’s 2016 season is a p5 schedule that’s better than most others, I think. It’s going to be a real tough season for BYU but I’m excited to see the outcome. Can they get themselves on the plus side? And if they were some how able to win out will this schedule be enough to propel them into the playoff picture? I highly doubt they will go 12-0 or even 9-3 for that matter but I can see them 8-4 and getting a good bowl game out of it to finish the season 9-4. However, let’s see how they do this season before I get really crazy with my predictions.

Thought we had a game scheduled at Fresno St. on Nov. 5th. Was it cancelled or rescheduled?

With all the comments I have seen from BYU fans either complaining about scheduling Toledo in September because they are a weak opponent or claiming they are happy to add Toledo as a weak opponent to an already tough schedule; I thought “hasn’t Toledo been pretty respectable the last 5 years?” So I checked both schools records since 2010 and I would say Toledo isn’t going to be some walk over for the cougars.

Toledo has fallen short in several P5 games by less than a touchdown and they cant seem to solve NIU with several close losses there as well, but overall they have been good. I would expect that trend to continue the next couple seasons.

If this is BYU’s worst opponent in their first 8 games in 2016 they better be ranked number 1 after week 8 if they win them all (wont happen though).

I would completely assume that BYU would be Top 5 if not #1 if they won out those 1st 8 easy.

I don’t think Toledo is a slouch–they put up 9 wins including a bowl game win last year. But if you wanted to criticize it would be they went 7-1 in the MAC (losing only to Northern Illinois), 1-3 OOC beating FCS New Hampshire and losing to Missouri, Cincinnati, and Iowa State, and beat a 7-5 Arkansas State from the Sun Belt in the GoDaddy bowl. BYU should handle these games.

It’s a “should win” but not an “automatic win for BYU. It is useless pointless to guess a point spread more than a year out; but BYU would probably be -13 to -18 or so.

So, are we only getting 5 home games in 2016? Due to the “Neutral Site” game with Arizona. Lame! That is a much bigger story than scheduling Toledo in September. Which, I think is a great move by the way. Right now I only see one for sure win on this schedule. Gotta get better if we want to go to San Diego at the end of 2016.

BYU will likely schedule a FCS school in November for their sixth home game. They currently only have 11 games scheduled for 2016.

Thanks Gayle. Good point. Forgot about the token FCS home game. I was looking at the UNLV away option but I also see that can be pushed to 2017. Thanks cool, at least it’ll be one in the win column.