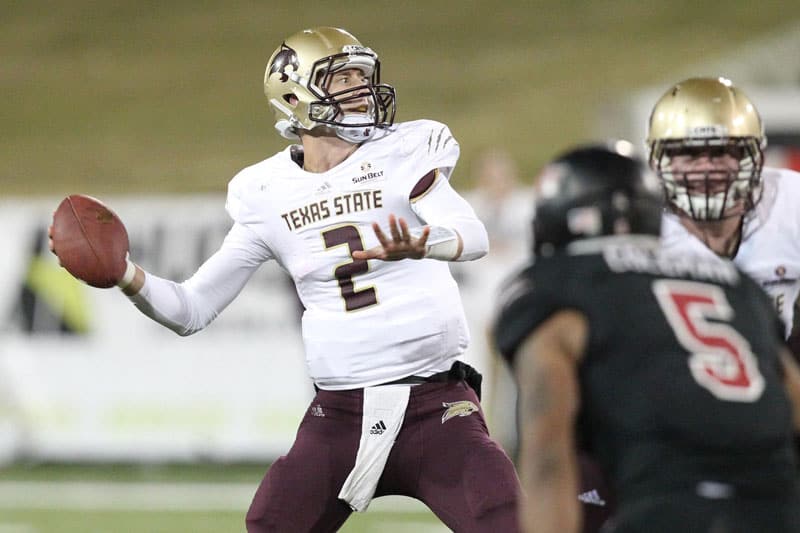 The Texas State Bobcats have completed their 2016 non-conference schedule with the addition of games at Ohio and Arkansas, the school announced today.

Texas State will open the 2016 season with a road game against the Ohio Bobcats at Peden Stadium in Athens on Sept. 3. The game is the first of a home-and-home series, with the second game at Texas State on Sept. 26, 2020.

The 2016 game between Texas State and Ohio will be their first-ever meeting on the gridiron.

Two weeks after opening at Ohio, Texas State travels to face the Arkansas Razorbacks on Sept. 17. That game will also mark the first meeting between the two schools.

Two previously announced home games round out the non-conference schedule for Texas State in 2016. Houston visits San Marcos on Sept. 24 followed by Incarnate Word on Oct. 1.

My money’s on the Bobcats

I posted the below comment last month (Dec. 22) to continue conversation of the Power Five scheduling and I see Arkansas continues to give the SEC their status quo on NC scheduling with this news. —-

“In 2016, three of the five Power Five Conferences will be playing a nine game conference schedule, thus automatically having those teams play a minimum of nine Power Five opponents. The ACC and SEC will continue to play only an eight game conference schedule. This may appear not to be much of a scheduling advantage or disadvantage for these two situations, but it does create a potential weakness in the ACC and SEC schedules if they don’t schedule up.

When looking at the 2016 schedules at first appearances it looks relatively simple to see some issues;

The ACC appears to be scheduling up in 2016 with only one team (BC) currently having no NC games from Power 5 conferences. Of the 14 ACC teams, six of them are currently scheduled to play two Power 5 conference games to make for a total of ten Power 5 games on their individual schedules. [6 of 14 play 10+ P5 games]

The Big 10 for the most part has scheduled up with a nine game conference schedule and only two of their 14 conference teams (Maryland and Purdue) currently showing no Power 5 NC games. [12 of 14 play 10+ P5 games]

The Big 12 as well has nine conference games, but three (3) of their ten conference teams (Baylor, Kansas, and Kansas State) are playing no Power 5 NC games in 2016. Kansas State still has an open date in 2016, so perhaps they’ll fill that in with a Power 5 NC game. As well in the Big 12, Texas is one of only a few teams nation wide that play two Power Five NC games beyond their nine conference games. [7 of 10 play 10+ P5 games]

The PAC 12 has always been willing to schedule the power NC games in the past, but at this time there are three (Arizona, Utah, and Washington State) showing no Power 5 NC games. Of the three without a Power 5 NC game only Arizona has an open date in 2016. Both Oregon and USC have two Power 5 NC games, making for their schedules to have 11 Power 5 games. [9 of 12 play 10+ P5 games]

And finally The SEC will continue to have only the eight conference games leaving four open slots for NC games. Of the 14 SEC schools only one (Mississippi State) has not scheduled a single Power 5 opponent and the other 13 have scheduled only one Power 5 NC game each. [0 of 14 play 10+ P5 games]

You can look at information and details in many different ways, but the facts do show the SEC at this time for 2016 has a very limited schedule. If the SEC wants to continue to be viewed as a “power conference” I believe they’ll need to start scheduling like one. My hopes would be that all Power Five Conference Schools would play a nine game conference schedule and schedule a minimum of one Power 5 NC game. Past Reputation and Win-Loss Records of prior seasons should not and will not give you credit towards rankings into the College Football Playoff era.”

The SEC is a joke. At least the ACC has ND on half of their schedules.

Where as I don’t think the SEC is a “joke”, I do think it’s a crime that they are allowed to get away with the scheduling they do. Not only do they as a whole schedule weakly, they as well have a prime practice of selectively placing their stronger opponents (in or out of conference) after an off week or a “given win” week. College Football needs the SEC to step it up.

Believe me… almost every team in the SEC has a “power schedule”. That is because they play other SEC teams. Arkansas just won a hard fought game against #15 TCU. Do you believe Texas State could have won that game? If Texas State had the same schedule as most SEC teams… their fans would be crying and begging for a win… any win.

maybe you should stick to talking about things that you actually know something about… just a thought.

No conference is as stacked as the sec west . Setting the sec east aside a second because it’s games are considered in conference of the remaining four ” power five ” conferences none have had more than one or at best two perennial championship potential teams in their conference. Proof? Oregon and PAC 12 who do they play ? USC , Stanford , UCLA ? Florida St. , who is good in the acc ? Georgia Tech ? Boston College ? Clemson ? Ohio State and the big ten, who is good in the big ten ? Wisconsin? Michigan St ? Iowa ? Nebraska ? Big 12 and TCU ? Who do they play ? OU , Baylor , Texas . Then there is Notre Dame who never really plays more than one maybe two top 25 ranked teams a season . The only other team not from a ” power ” five conference I could see making the college football play off is Boise St. who really plays no one of true significance either and to sneak in would need an undefeated season and a minor miracle with the selection committee. Nothing even comes close the the eight game in conference, nine if you win your division schedule of an SEC schedule east or west. The west being the most daunting of the two. The SEC is the only conference I could fathom producing two playoff worthy teams in our current system due to the fact that the parity of the level of competition amongst SEC teams top to bottom is unmatched by any other conference. Sooooie Pigs