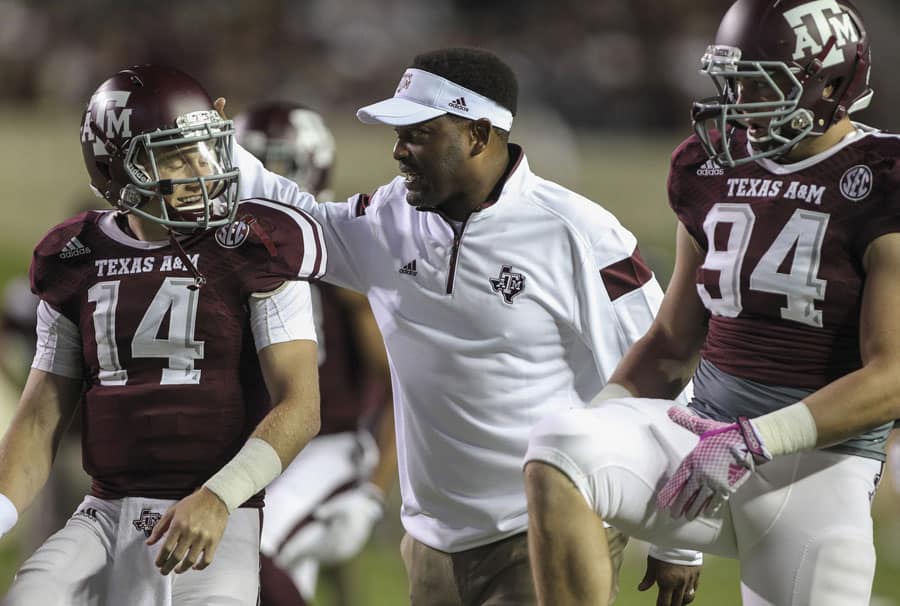 When Texas A&M left the Big 12 for the SEC, they left behind several games against in-state schools and others in the Southwest region.

More importantly, their move to a new conference signaled the end to their rivalry game against the Texas Longhorns, a contest that had been played annually from 1915 through 2011.

Texas A&M and Texas have traded quotes and some barbs since that time, and they’ve even shown mutual interest in scheduling a future game. But that “mutual interest” was over a year ago and still nothing has materialized.

If that wasn’t enough, Texas A&M’s 2015 football media guide (page 20) brought to light a new scheduling nugget that will occur for the first time in the history of the Aggies football program — no games against a team from the state of Texas.

Although the Aggies play nine games within the boundaries of the state of Texas, Texas A&M will not face a single opponent from the Lone Star State for the first time in program history in 2015.

No games against teams from their own state. That’s what realignment has done to Texas A&M’s football schedule. That and the rise of neutral-site games. The Aggies play one in Houston in 2015 against Arizona State.

After opening the 2015 season vs. Arizona State, the Aggies welcome Ball State and Nevada to Kyle Field in consecutive weeks.

In the recent past, Texas A&M has played several in-state teams each season. After Texas and other in-state Big 12 schools dropped off the schedule, the Aggies faced two Texas schools in 2012 (SMU and Sam Houston State), four in 2013 (Rice, Sam Houston State, SMU, and UTEP), and three in 2014 (Lamar, Rice, and SMU).

With scheduling being a puzzle each season, it’s hard to decipher exactly how the Aggies ended up without an in-state opponent this season. But there are 11 FBS teams and eight FCS teams to choose from.

Because t.u. is afraid of A&M now that the Aggies win the Lone Star State recruiting war every year

Would someone please explain to me why A&M can’t play Texas? And why Missouri can’t play Kansas?

Ask Texas and Kansas why

I’m fine if that game gets put back on the OOC slate, but if you ask me which series I’d cancel to have made it start sooner? There isn’t one. Sorry, as big as that tradition was, I don’t want to give up games against Notre Dame, Cal, USC, or give up going to a game I already plan to attend in the Washington DC area. And I wouldn’t give up LSU, Ohio State, or Michigan either. The regional rivalry is fun, but these national-level OOC games are way more exciting when they actually happen. The Texas vs A&M series would produce a ton of buzz the first couple years it returned and then everyone would think of it about as much as they think of Virginia Tech vs Virginia. It would be a big deal when one or both was doing well and otherwise would just be a game.

Sorry Jeff same old Texas excuses, regardless of how well typed. If the ACC and SEC schools can make it work so could the Horns & Aggies…..f they wanted too. Kansas seems to think they are bigger than they really are, they need Mizzou in football.

Plus Jeff the Aggies games with Auburn. LSU and Alabama have replaced the horns quite well. They expanded the stadium after leaving Bevo’s bosom……..just saying!

Big XII got mad and didn’t accept the moves of Missouri and A&M as business decisions for the best of their schools. They are still bitter especially Texas who thinks the world revolves around them.

You say that like they made their own exclusive channel or something.

Let me make sure I know which “exclusive channel” you’re talking about? Would that be the Longhorn Network, which was originally conceived by DeLoss Dodds as the “Lone Star Network” when he approached A&M about making it a partnership between the two schools?

Also, just to make sure I’m keeping track of the good guys and bad guys here, A&M and Missouri leaving the Big 12 for more money in the SEC (while severing __ of the most played rivalry games in the country with Baylor (108 times), Texas (118 times), Tech (70 times), and Iowa State (104 times), Kansas (120 times), Kansas State (97 times), Oklahoma (96 times), respectively) was a business deal… but Texas, after A&M decided not to be a part of the Lone Star Network, pursuing it anyway because they could get some good money in the process was bitter and self-centered? Just making sure.

Don’t get your panties twisted in a bunch, I don’t have a dog in this fight so I don’t really care. While I now reside in the Lone Star State, I plan on attending games ranging within a ~3 hour radius of the metro Houston area which includes all of the biggies. However, I do some from B1G country, where they do the network right – not only in having a solid network, but by doing right by the member institutions.

These comments are all pretty funny and ignore the facts above. The non-conference in-state rivalries you listed aren’t in the same conference and the few that used to be haven’t been in a really long time. Any conference splits that occurred there were well before national level games mattered as much and definitely well before football series contracts included expensive buyouts or were planned up to a decade in advance. I haven’t heard any A&M people talking about buying out Texas’ deal with USC or Notre Dame. Keeping those games instead of changing because A&M went to the SEC is as much a “business decision” as A&M leaving.

As a fan, which home schedule would you rather have?

The lousy fact is EVERY 1-A conf. (except the Pac-12) is too darn spread out across the land……too many baseball, softball, tennis, field hockey squads now have to fly to some away contests now, adding to the cost of the Ath. Departments.

EDIT: there is nothing wrong with Boston College (for example) being in the ACC, as Boston is right on the ocean, as is Miami……I don’t have a problem with the ACC being “vertically stretched”, like the PAC-12….

The Pac 12 is just as spread as other conferences people just don’t realize it b/c it’s all on the west coast.

No, I’m pretty sure that Lubbock and Austin are well over 1000 miles from Morgantown, WV. And of course if the conference ever expands rather than splitting up for other conferences, most of the candidates are 1000+ from current members as well.

I believe that the closest conference to having less than 1000 miles between the outlying schools is the SEC with the distances between Mizzou and Florida (who are ironically both in the “east” dicision), and A&M and South Carolina both being just a few dozen miles over 1000 (driving distance anyway).

Funniest thing to me is how all the A&M fans think how great A&M is now that they won some games. Still didn’t win the conference…Both A&M and MIZZ went from being average B12 and whipping the “Powerhouse” teams of the SEC – just goes to show that the SEC isn’t all that the media makes it out to be… Will they play TEXAS again? Who knows….

I find it funny since Texas A&M & Mizz have left the Big-12 now Baylor & TCU are the new powerhouses of the that conference, just goes to show you.