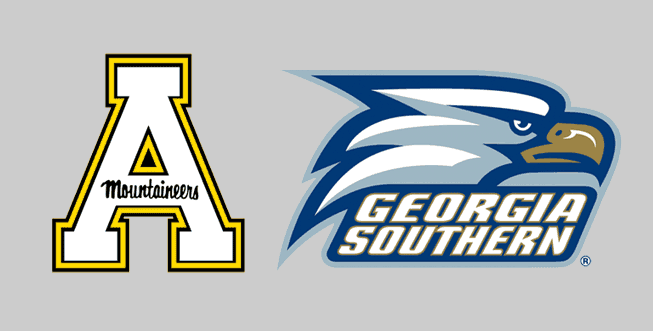 The Sun Belt has officially announced the addition of Appalachian State and Georgia Southern to the conference effective July 1, 2014.

Appalachian State and Georgia Southern will both be eligible to compete for the Sun Belt Championship for the 2014 season. After the 2015 season, both schools will then be eligible to participate in bowl games.

“Georgia Southern University has a rich history in athletics dating back to 1909 and has won six football national championships at the FCS level, so it brings a winning tradition to the Sun Belt Conference,” said Dr. Jack Hawkins, Jr., Chancellor of Troy University and President of the Sun Belt Conference Executive Committee. “More important, GSU is an outstanding public institution that is a good fit for our league—academically, athletically and geographically.”

“Appalachian State University adds value to the Sun Belt Conference academically and athletically, plus it fits well in our league’s southeastern geographic footprint,” said Hawkins. “ASU offers a well-rounded athletics program and has one of the premier FCS football programs in the nation. Appalachian State is a welcome addition to a growing conference.”

The Sun Belt football membership is expected to expand to 12 as early as next week with the additions of Idaho and New Mexico State. The conference would then split into divisions, likely geographical (see below), with each division winner facing off in a championship game held on campus.

Someone should turn off the lights for this crap conference!
No one seems to be minding the front office of this disaster…

Sun Belt will go the way of the WAC (and Big West before that). It’s only a matter of time.

The Sun Belt has many years left. There’s no other place for these schools to go for the forseeable future. Looks like a pretty solid slate of schools some decent ballclubs.

If that were true, what would happen to all of those schools? They couldn’t compete even in the Big East or Mountain West

While it is a weak conference you have to remember only 1 FCS team counts for bowl eligibility(and most likely playoff)this is a fbs conference which insures a win that could have trouble with the higher end FCS teams. Teams from the SEC or Big 12 could schedule these schools and could argue that since they didn’t play a fcs team that they should have a higher ranking.

GSU and ASU would beat Wake, Duke, BC and Maryland from the ACC hands down.

In REALITY, that would NOT happen. (-:

If the ACC team was the road team? Perhaps.

Idaho could beat 80% of all high school teams guarenteed!

Any given Saturday a team will compete doesnt mean they are good, but sometimes the underdog wins 1 out 20 games played against the top conferences. Just see this conference as JV before they play Varsity.

I know that App. State was trying to join C-USA for a little while. They never joined them, so now they joined the Sun Belt

ATLMAFIA, they shouldn’t turn off the lights they should just revoke georgia state’s football membership. I mean what Athletic Department and Football conference looks at a team that went 1-10 in the Colonial Athletic Association and thinks moving up a division is a wise choice? At least The Georgia Southern University Eagles are proven winners: 275-101 (.731) with 9 conf. titles and 6 national champs (GA. So). However, what you should do is stop hating on Georgia Southern every chance you get. I swear you have been on every forum regarding our move up. I guess you must be compensating for something small…like an overall record 10-23 (.303).

While GA State isn’t worthy of being in the Sun Belt, GS is worthy.