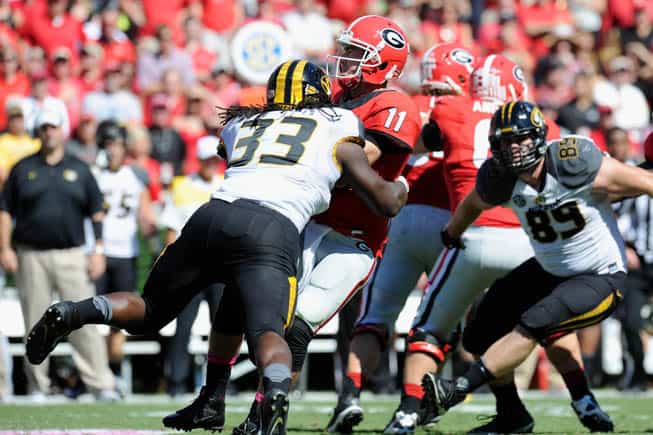 Georgia has played the toughest schedule so far in 2013. (Dale Zanine-USA TODAY Sports)

Most FBS teams have played six games already, which means we’ve reached the mid-point of the 2013 college football season. Let’s review the strength of schedule rankings (SOS) as they stand now.

For comparison purposes, we will use Phil Steele’s preseason strength of schedule rankings. Click the title to view the complete rankings for each source:

The Florida Gators, currently 4-2 and ranked 22nd in the AP Poll, topped Phil Steele’s preseason list. Florida has already faced two AP Top Ten teams in Miami (FL) and LSU, and the Gators lost to both on the road. UF travels to No. 14 Missouri this weekend and later plays No. 15 Georgia, No. 11 South Carolina, and No. 5 Florida State.

This NCAA ranking is based solely on the winning percentage of past opponents. Georgia’s past opponent’s (Clemson, South Carolina, North Texas, LSU, Tennessee, and Missouri) have a combined 29 wins and eight losses. Utah’s past opponents (Utah State, Weber State, Oregon State, BYU, UCLA, and Stanford) have 23 wins and 14 losses.

Anderson & Hester’s strength of schedule rankings are led by the SEC with five teams. The Pac-12 follows with three and the ACC with two. Georgia has the toughest schedule, just as they did in the NCAA’s rankings for games already played.

Jeff Sagarin also has the Georgia Bulldogs ranked first. Ole Miss comes in second and is actually ranked in the Top 5 of each computer ranking. Ole Miss (3-3, 1-3 SEC) has faced Vanderbilt, SE Missouri State, Texas, No. 1 Alabama, No. 24 Auburn, and No. 7 Texas A&M.

Georgia also tops the strength of schedule rankings in the Colley Matrix. That gives the Bulldogs the toughest schedule in four of the six BCS computer rankings. Massey heavily favors SEC teams, as seven are ranked in the Top 10. The other three spots belong to the Pac-12.

Billingsley is the only computer ranking that does not have Georgia first. Ole Miss is first here, followed by Georgia, LSU, Kentucky, and Utah. Kent State is ranked 8th here, and they are the only MAC team to appear in any of the current Top 10 rankings.

Looking at each of the rankings, it’s clear that Georgia has played the toughest schedule so far in 2013. The Bulldogs are first in five rankings (NCAA – games played, Anderson & Hester, Colley Matrix, Jeff Sagarin, and Kenneth Massey). UGA’s 2013 schedule was ranked 23rd in Phil Steele’s preseason rankings.

I respect Phil Steele, and I am not a Georgia fan, but how did he NOT have UGA in the top 10 in his pre-season poll of most difficult schedules?