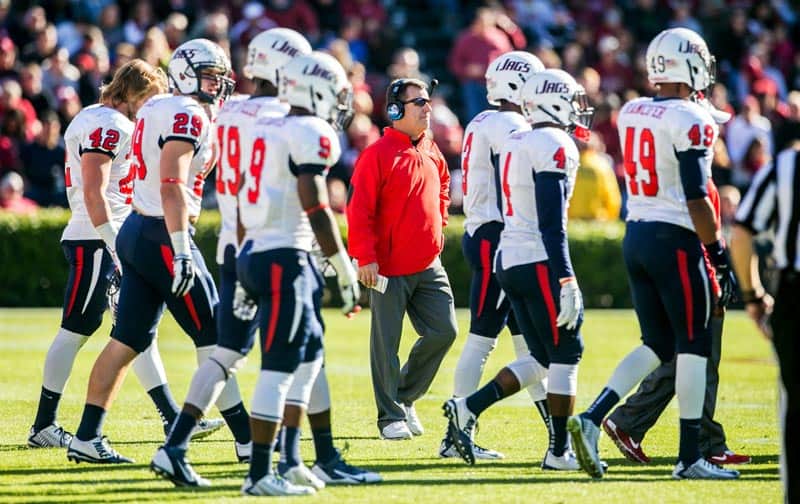 The South Alabama Jaguars have scheduled future home-and-home football series with the San Diego Aztecs and the Memphis Tigers, the school announced today.

South Alabama will travel to face San Diego State at Qualcomm Stadium on Sept, 19, 2015, which will mark the first ever meeting between the two schools. The Jaguars will then host the Aztecs at Ladd Peebles Stadium in Mobile on Oct. 1, 2016.

San Diego State replaces the UAB Blazers on South Alabama’s schedule in both 2015 and 2016. The UAB football program was shut down in December.

South Alabama will begin a home-and-home series with the Memphis Tigers on Sept. 22, 2018 at Liberty Bowl Memorial Stadium. The game will be the first meeting between the two on the gridiron. The Jaguars will then host Memphis in Mobile on Sept. 14, 2019.

South Alabama is set to open the 2015 season at home vs. Gardner-Webb on Sept. 5. Their full schedule, including dates for Sun Belt games, will be released in early March according to the school.

Advantage for SDSU to travel to South Alabama? They’d better their profile by traveling to Pullman, WA or to Boulder, CO and win a game against a power conference team.

What a joy to find soenmoe else who thinks this way.

SDSU turned down a game at Alabama. I guess they want an easier road game. They will never be a top D1 school if they don’t travel to play big teams.