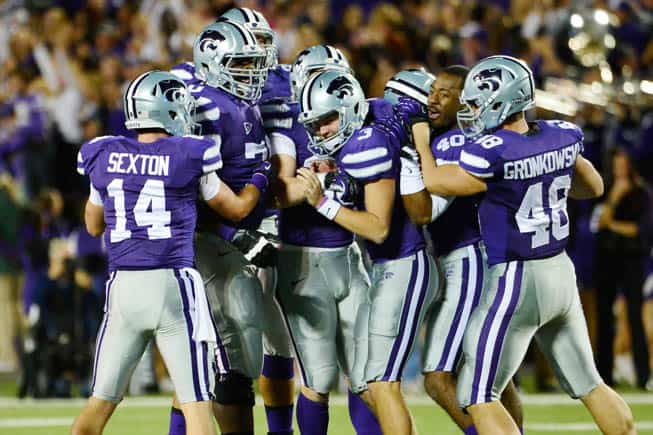 We all know we should tune in for Florida State-Oklahoma State, Virginia Tech-Ohio State, and LSU-Wisconsin in 2014, but what other non-conference clashes will be worth our while?

Though it’s impossible to predict when lightning will strike, here’s a handful of non-league games that may magically turn into must-see TV.

The 2014 edition of Louisville–Notre Dame will mark the first football meeting between the two schools in history.

Tune in to see a new-look Irish offense that should improve on its No. 74 national rank in scoring from a year ago grapple with a Cardinal defense that returns five starters to the No. 2 scoring defense from 2013. Also of interest is the coaching matchup, featuring two guys who share just two losing seasons between them.

The 2014 Miami–Nebraska game will be the first meeting between the two powerhouses since 2002, when the Hurricanes triumphed 37-14 over the Huskers in the BCS national championship game.

This year’s clash will be the tale of two coaches. On one hand is Nebraska’s Bo Pelini, hanging on by a thread, needing to convince the Husker faithful that he really is the right guy to get the program back in national championship form. On the flip side is Al Golden, in the early stages of engineering what looks to be a return to glory at Miami.

Before you envision Auburn prancing into town and beating poor, little K-State to a pulp, remember that Bill Snyder has a track record of having his team ready for big non-conference games.

Add in that one of the five wins came over No. 11 South Carolina and throw in Tennessee’s No. 5 ranked recruiting class this year and suddenly this game is far from a sure thing.

Not only does Texas Tech–Arkansas mark the first time the Red Raiders have dared schedule a power-five, non-conference opponent since 2003, it should also be an offensive explosion heard round the world.

It will be Texas Tech’s No. 2 ranked passing offense from a year ago against Arkansas’ No. 73 passing defense and the Red Raiders’ No. 99 ranked rush defense trying to contain the Razorbacks’ No. 21 ranked rushing attack.

The Michigan State–Oregon game will be a lot like watching the guys at the History channel duke it out with the boys from over at the Sci-Fi channel. In other words, it’s good old-fashioned defense against new-age point scoring.

Candidates for the “whew” game in 2014 are the home opener versus new Sun Belt member Appalachian State (we won’t even go there…), a Week 3 visit from Miami (the one in Ohio) and the Week 4 game against Utah.

The Utes are the classic wolf in sheep’s clothing.

Utah beat Stanford by that score.

Appalachian State is FBS now, a member of the Sun Belt.

I’m not sure how a game featuring a Nat’l Champ Game participant (K-State/Auburn) and Michigan State-Oregon can be “under the radar”.

Being a BYU fan, therefore my second favorite team is whoever is playing Utah, it pains me to correct Amy. Utah did not fall to Stanford; they beat Stanford 27-21 at Rice-Eccles Stadium, Oct 12th in 2013. Michigan definitely needs to look out for Utah, and Appalachian State who will want to prove that 2007 was not a hoax.

Have to say, I think UCLA vs Texas in Jerry World will have a better chance at being water cooler talk than Utah at Michigan. Glad to see the Big XII scheduling some big name Power 5 opponents.

I think people are underestimating the BYU-UNLV game on Nov. 15th. Coach Hauck has the Rebels on the right track and will get some big plays out of Shaquille Murray-Lawrence and Devante Davis.

It may be under-the-radar now, but folks across the country will take notice come November. A win will give my Cougars some great exposure and more credibility in the east.

@Adam. Wait, a win over UNLV will give BYU credibility in the east? Wow. Nobody out here cares about either BYU or UNLV, join a real conference or schedule some real opponents to gain credibility. Looking at your Cougar’s schedule it looks like they are out for wins rather than credibility.

LOL, no I’d go with BYU vs. Savannah State.

That is hilarious! I love it when folks add a little comedy to the comments section. Thanks for the belly laugh Adam!

@Josh. Actually that comment doesn’t surprise me at all. They are the most delusional fan base in the world and it isn’t close. Trust me. I’ve lived among these strange folks most of my life. They talk national champiionships and Heisman Trophys every off-season.

Utah has dominated them for the last 13 years or so yet they still have the never to call Utah their “little brother”.

Keep an eye out for [email protected] for that might just be one of the most exciting games of the season. I wish FSU and OKST had a home and home series going on instead of a neutral site game but that game is still one to watch for sure.

The KSU game with Auburn may very well be the last OOC game KSU plays in the regular season against any P5 team for a long time. None are on the schedule for 2015. Last year KSU did not play a BCS OOC opponent in the regular season. The Auburn game like the sereis in 2011/2012 with Miami were scheduled when Ron Prince was the HC.The series in 2009/2010 series with UCLA was also scheduled by KSU when Ron Prince became HC of KSU. The series with Oregon for 2011/2012 was also a Ron Prince scheduling matter.

Bill Snyder has been HC for the second time at KSU since November 2008 since then not a single BCS/P5 OOC opponent has been added to the. the KSU schedule.

The cupcake schedule worked pretty well for Snyder is his first go-round.

San Jose State at Auburn could be very interesting if the Spartans can develop a young O line.
And I agree, San Diego St – UNC also is up there…

Pelini hanging on by a thread???? Pleeeeeeeeeeaaaaaaaaasssssssssseeeeeee

BYU @ TEXAS. Payback. That will be a great game, I think that they have a good QB. But we will be ready for BYU and ready to take the Big 12.

Matt…KSU is living in the past and it’s a new day in CFB. Snyder and his AD must their update their scheduling tendencies if KSU wants to earn a shot in the playoff. That goes for much of the Big 12,

Although the Big12 plays a 9-game true round-robin conference schedule, future OOC schedules (besides OU and Texas, and WV in 2014), are not strong as they need to be going forward,

OU and Texas appear to have elected to no longer schedule FCS programs, which makes it tougher on other Big12 Programs in regards to relative SOS.

After 2014, the OOC schedules for many Big12 programs go fairly light weight. In 2015, Notre Dame will be the only potential Top25 program to play a non-conference game against a Big12 program (Tex-ND). Unless Tenn, Ark, Iowa, Minnesota, Cal, Maryland and Rutgers have break out seasons.

Baylor’s OOC schedule is clearly the worst. Obviously the Bears do not believe they will have a shot at playoff berth in the future and are scheduling to make a decent bowl game. Kansas St, Ok St and Kansas also are showing relatively weak schedules. Iowas St is very lucky to have Iowa on their schedule every season (not so much the other way around). Texas Tech has done a good job getting Arizona St and Arkansas on their OOC schedules.

After 2015 there are many OOC TBA’s for sure, Will see how some of these programs make adjustments to their OOC scheduling.

But overall, the Big12 is just not a strong enough conference that their 9-game conference schedules will position themselves in the new football playoff, without some extra heft added to their OOC schedules.

At the very least the Big12 should make a policy that every program must schedule at least one P5 program to the OOC schedule every season. If that rule were put in place right now, OK St, Kansas St, Kansas and of course Baylor would be impacted.

Wow, this article has a strange definition of what’s “under the radar”. I couldn’t have told you that Virginia Tech would be playing Ohio State this year. MSU-Oregon, on the other hand, is probably the game of the year for the entire country outside of the Iron Bowl.