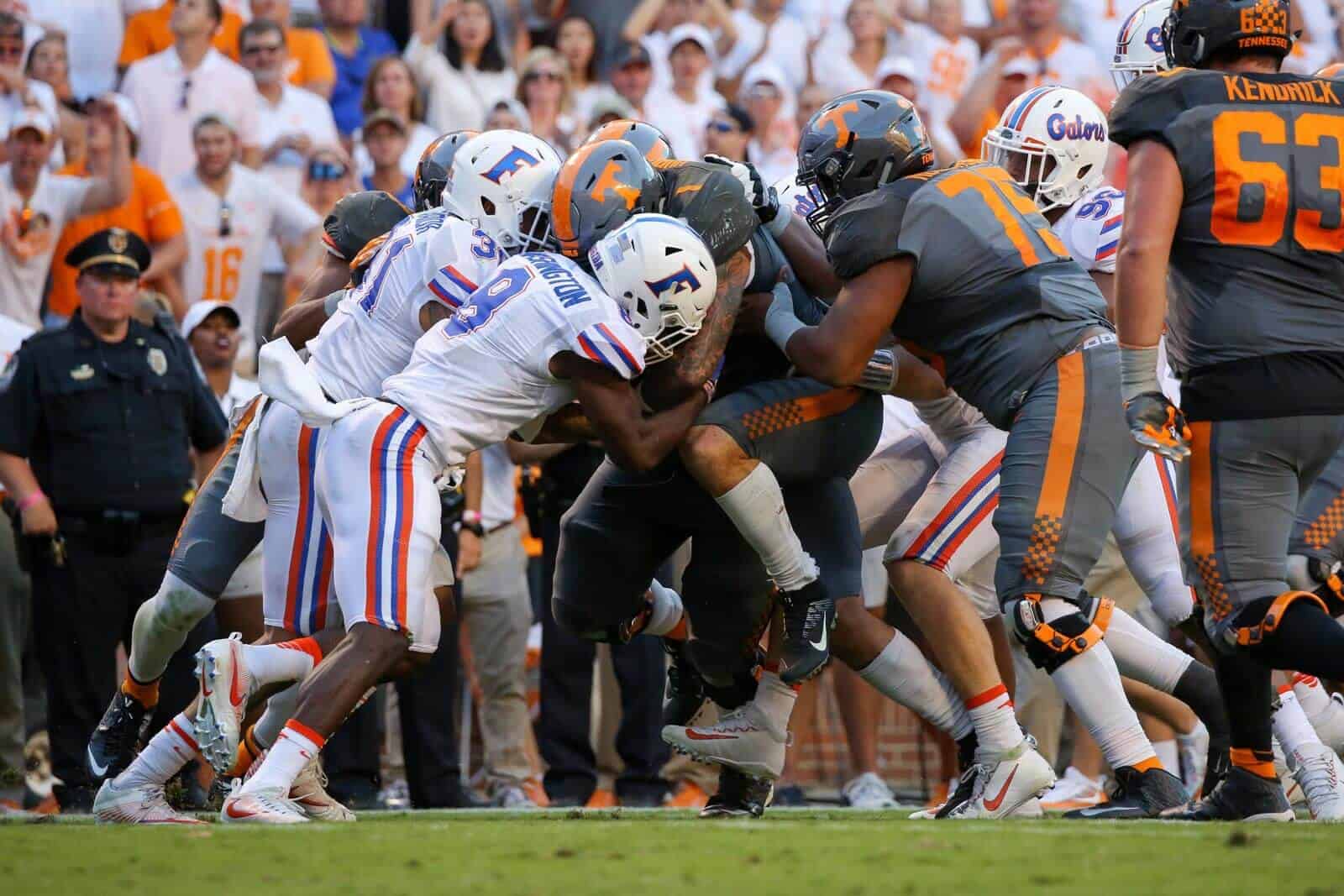 Welcome to SEC Football Predictions | 2017, Week 3. The SEC had been pretty dominant in Week 1 over non-conference foes, but this week Clemson and TCU invaded the SEC West and made Auburn and Arkansas, respectively, look very pedestrian on offense. Georgia, on the other hand, beat Notre Dame in South Bend, 20-19. Give Brian Kelly and the Irish credit — they played well in a hostile road environment… at home. Brian Kelly also tried to shame a reporter after the game telling her the team didn’t lose by one possession, but by one point. Hey, Brian. Real quick, that’s yes on both. One possession and one point are the same thing. It only took Kelly until Week 2 to get the team’s first loss and act like a complete jerk. Good work, B-Kell.

This week will see three SEC vs. SEC match-ups, so the season’s hate and ire will heat up a little more in Week 3.

To protect our page from being liked by Ted Cruz’s Twitter account, I will get to the predictions straight away.

Quick word of wisdom: What else is there to say about Texas A&M other than Kevin Sumlin is hanging on to his job by the string of integrity possessed by A&M regent, Tony Buzbee. The (social media) vocal Buzbee will probably have his wish of Sumlin’s firing granted soon enough. I think it will happen after a loss to South Carolina at home on September 30, but a bad performance and/or loss to UL Lafayette on Saturday and the Aggies may  be yet another SEC West team with a head coach holding the “interim” tag.
PREDICTION: Texas A&M 27, UL Lafayette 13

Big Game word of wisdom: Tennessee-Florida was the rivalry of the 1990’s. It’s a rivalry that became so synonymous with the SEC that there is one generation of Tennessee fans that hate Alabama the most of any team and another group that hate Florida more. There was a distinct line drawn between younger and older fans separating the two generations. The past 20 years has seen the hate scatter among the newest generation of fans as Alabama has risen to the top again under Nick Saban and Florida held an 11-year win streak over the Vols. That streak, by the way, ended last year in Knoxville after a dominant second half by the Vols.

This game is usually early in the season, so we always answer a few big questions at the end of four quarters. This season’s game takes the questions to an entirely new level. Florida’s home opener against Northern Colorado was cancelled last week due to Hurricane Irma making landfall over the state. Tennessee was dragged up and down the field inside Mercedes-Benz Stadium in Atlanta, but somehow still defeated Georgia Tech in overtime. The only game the Gators have played was in Arlington when they laid a large egg against Michigan.

As bad as Florida looked against Michigan, I can’t imagine the Gators performing in a similar fashion against the Vols. For one, some of Florida’s bad performance can be attributed to Jim Harbaugh and the Wolverines dominant play up front. Tennessee is not good against the run and Florida remains unsure about its quarterback. Not getting a chance to see his quarterbacks against a cupcake like Northern Colorado puts even more pressure on the Gators offensive staff to dial up a great running game for Saturday afternoon.

We will know much more about these two teams after this game, but since this is a prediction, I can only go on the past two weeks and history. I’m using history as the key determining factor for 2017’s edition.
PREDICTION: Florida 23, Tennessee 17

Quick word of wisdom: Auburn’s offense could not have looked worse Saturday at Clemson. Good news, though, Tiger fans. Gus Malzahn says that his offensive coordinator is moving upstairs to the press box for this game because, “that’s where he’s most comfortable.” I mean, why wouldn’t he be up there for a marquee game on the road against Clemson? It’s not like Gus could overrule every offensive play-call from a headset. It’s easier to hover over your coaching staff when they are standing on the field as opposed to way up high in the press box.

Clemson is a really good team, but Auburn’s defense played well enough to win and the offense ripped defeat from the jaws of victory. This team has been bad on offense too long considering they are coached by the offensive genius and cerebral coach, Gus Malzahn. I don’t see any of this getting better before it gets worse. Mercer won’t be the team to prove me right, though.
PREDICTION: Auburn 37, Mercer 3

Quick word of wisdom: This game has “ew” written all over it. There was a time that a match-up featuring these two programs would have stoked our interest, but not in 2017. Purdue is an improved program, while the football program in Columbia has been unraveling over the previous 2.5 years. This is the same Missouri that took the SEC East by storm and won back-to-back division titles in 2013 and 2014. Because the current dichotomy in direction between the two programs, I’m taking Purdue to win this one going away.
PREDICTION: Purdue 40, Missouri 24

Quick word of wisdom: This is the last of a two-game “break” for Alabama before kicking off the conference schedule and putting the SEC Championship Belt on the line in Nashville against Vanderbilt. There’s not a lot to say about this match-up against the Rams of Colorado State other than Alabama should win. Oh, wait. Mike Bobo is the head coach of the Rams. He was a quarterback and offensive coordinator at Georgia. And his last name is Bobo. We’ve always pretended to just ignore it, but it’s time we giggle a little.
PREDICTION: Alabama 44, Colorado State 3

Big game word of wisdom: There are so many questions that will be answered for both teams in this game. LSU appears to be on course to live up to the talent and expectations that have lived in Baton Rouge since Nick Saban wore purple and gold. Mississippi State fans are cautiously optimistic and trying their best not to get too giddy over how this team could resemble that 2014 team that went all the way to No. 1 in the rankings. Nick Fitzgerald is morphing into that Dan Mullen quarterback that doesn’t do anything special other than dominate an entire game with his legs, his arm, and his size. Two quarterbacks you may want to Google are Tim Tebow and Dak Prescott. They were both groomed and coached by Mullen. I’m beginning to wonder what kind of laboratory Dan Mullen has in his basement. He always has a 6-5, 230-lb quarterback to lead his teams.

If this game comes down to quarterback, Starkville will be shaking cowbells like a…. well… like an MSU fan at a Mississippi State football game. I think Nick Fitzgerald leaps right off everyone’s radar and into a few early Heisman lists.
PREDICTION: Mississippi State 28, LSU 24

Quick word of wisdom: Georgia is coming off a fun and successful trip to South Bend. By Georgia, I mean the entire state of Georgia. The Chicago tourism folks must have targeted the state of Georgia by having a Georgia sports weekend. And it worked very well. After the Bulldogs took over South Bend in the win over Notre Dame, some of those fans reached in their luggage and put on a Falcons shirt and drove over to Soldier Field to watch the Falcons beat up on the Bears.

Hopefully the team is better at moving on from last week than I am. I typed zero words about the upcoming game with Samford. So, with that being said, Georgia will win this week’s game against Samford. And during the game, the Georgia fans can discuss how awesome the trip to Notre Dame and Chicago was.
PREDICTION: Georgia 45, Samford 3

Quick word of wisdom: Vanderbilt’s opponents have a 12 percent success rate on third down conversions. Opponents are 0-for-2 inside the red zone. Derek Mason is a head coach because of Stanford’s ability to stifle an effective spread offense. Kansas State comes in ranked No. 18, but Vanderbilt is only a 4-point underdog which tells you that Vegas is beginning to believe in VU. The question is, does Vandy believe?
This writer believes and when this writer believes in Vandy, good things happen…. for the other team in their game against Vandy. I think Derek Mason gets a national signature win Saturday night over Bill Snyder as Vanderbilt builds a ton of momentum and excitement for next week’s SEC Championship title match against SEC Championship Belt holder, Alabama.
PREDICTION: Vanderbilt 21, Kansas State 19

Quick word of wisdom: The Gamecocks are primed to start the season 3-o and 2-0 in the SEC with a win over 2-0 Kentucky Saturday night in Columbia. South Carolina has been an underdog in their first two games, but come into this one favored by 6.5 points. The Gamecocks are not very deep, but the first 22 are very good. Deebo Samuel is worth 22 players at this point. He’s returned a kickoff for a touchdown in each of the first two games. Even if he doesn’t return another kick for a touchdown all season, the fact that he is in every team’s head on every kick of every game will change field position on its own. Kickers will be forced to aim away from Samuel, whether that means kicking to another side of the field or kicking it short.

Will Muschamp has both the offense and defense playing well and if the Gamecocks continue to stay healthy and play with this confidence, November will be fantastic in the East.
PREDICTION: South Carolina 34, Kentucky 20

Quick word of wisdom: Former Tennessee defensive coordinator Justin Wilcox is the new head coach at Cal and he is currently 2-0 with wins over North Carolina and Weber State. The Golden Bears trailed Weber State at the beginning of the fourth quarter before getting the win. Cal allowed 42.6 points per game last year, but have improved so far this season in their two wins. The statistic that stands out most for the defense is the 13 total points given up in the second half.

Cal will need that type of production on defense to beat this Ole Miss team. Johnny Manziel 2.0, AKA Shea Patterson, is throwing the ball all over the field. The only reason he doesn’t have more yards passing is the football field is only 100 yards. Patterson is 60-of-78 passing for 918 yards and 9 touchdowns in his first two games of the season. The competition was not exactly the 2000 Baltimore Ravens defense, but to have only 18 incomplete passes in two games is pretty remarkable considering he’s had an average of nearly 40 attempts per game.

The fact that this is at Cal will play much of a factor in the outcome. The difference will be at quarterback and because of that, I’m taking Ole Miss in a shootout in the wild west.
PREDICTION: Ole Miss 45, California 41