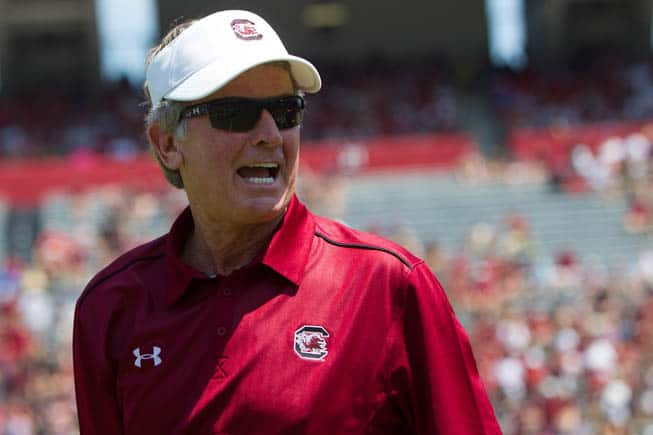 SEC football coaches held a teleconference with the media this morning and the main topic was, of course, future football scheduling.

You’ve probably heard or read here that the SEC is sticking with an eight-game schedule, 6-1-1 format — six games within their division, one permanent cross-division rival, and one rotating cross-division game. The SEC also stipulated than team must play at least one opponent from one of the other power conferences (or Notre Dame) each season.

Here is what each SEC coach had to say today on the subject of future schedules (in order of appearance on the call):

On the SEC staying with the 6-1-1 format, which has LSU playing Florida each season:

“It does not diminish the great competition in the conference. But to say this is the fairest and right way to pick a champion, I think that’s flawed.”

On keeping Auburn as a permanent rival:

“The game with Auburn is important to our people,” Richt said. “I think it’s important to the south as far as rivalries go. I think that’s a big part of college football. And so I’m fine with that.”

On being for the 8-game schedule:

Mason stated that he was “comfortable” with the 8-game schedule.

“In terms of where we sit, I think it allows us to put together a schedule that allows us to grow, get better. Let’s just see where the chips fall.”

Saban said he was still in support of a nine-game conference schedule, and that a 6-1-2 would have allowed the Alabama-Tennessee rivalry to continue.

“But I’m happy with what we’re doing now (8 game schedule).”

“I was very excited we were able to maintain the Tennessee-Alabama rivalry. That’s in our DNA. Its great for our fans and the country.”

On the 8-game SEC schedule:

“A wise man said if it ain’t broke don’t fix it. When I was in Big-10 meetings were about how can we catch SEC.”

On his team having the NCAA’s toughest schedule in 2014:

“It’s something we’ll wrap our arms around, hug it and kiss it, and make it as good as we possibly can.”

On the eight SEC games versus nine:

“I just think it was a smart move the league made,” Pinkel said. “I’m pleased with the outcome of the vote. Nine conference games could leave a better chance of SEC teams knocking each other out of the playoff.”

“We might even be playing Kansas again someday, if they were willing to discuss and continue playing that great rivalry we had.”

“I thought the fairest way to do it was the 6-0-2 method, but the priority is we want to stay at eight games,” Freeze said. “I think we beat each other up enough.”

“What we’ve done with eight games has put our teams — more than one usually — in the hunt for the national championship.”

On his preference for SEC scheduling:

“It doesn’t really matter what I want. I learned that quick. We’re the new guys in the league. There’s a lot of tradition in this league that would have changed with a 6-2 format.”

On the SEC schedule format:

“It really didn’t matter to me,” Stoops said. “The traditions of this league go a lot deeper than myself, so I really left that up to the leadership of our school.”

On the SEC scheduling format:

“I look at the SEC, there’s so much change in college football going on right now,” Mullen said. “Until we know how the whole system is going to play out, we don’t know if it’s going to be a good or bad system. I think with the SEC and scheduling, we’ve had an awful lot of success with it and it’s worked out fairly well. I can see with all the other questions to not make another change.”

On scheduling other opponents:

“We never got a lot of interest in teams wanting to play home-and-homes with us, but we’re going to continue to try to do so.”

On keeping the 6-1-1 scheduling format, Spurrier said “it did not matter to us either way.”

“I don’t know how anybody would not say the most fair thing to do is rotate two teams on the other side,” Spurrier said. “The most fair way to do is not the way our conference decided to do it. Each school sort of looked out for what was best for them. That’s the way we decided to go. Didn’t matter to us that much, but I sort of understand (athletic director) Joe Aleva at LSU. They are getting a bad deal out of this.”

On the SEC scheduling format:

By any measurement, a nine game conference schedule is a more fair process to define a division champion. and deciding who gets to play the conference championship game, in order to have a chance at getting into the college playoff.

The PAC-12 and B1G saw fairness as a priority issue when setting up their two-division 9-game formats.

The SEC decided fairness as not as much a priority issue. Certain rivalries take precedent over forward thinking.

When Mizzo and TAM came into the SEC the East/West divisions should have been realigned, with both Mizzo and TAM in the west and Auburn in the east:

Agree completely. I don’t care about the division alignment but it should have been 9 games and a 6-1-2 format…

They really don’t care about fairness within the conference. They can complain all they want, but while they were complaining, they still went with the 8 game schedule.

Historically, SEC teams have always been somewhat relucant to play each other. So this is nothing new.

I am so glad they left well enough alone now maybe Florida-Miami games will have a chance to continue that’s a great game for college football….but I do agree LSU,ALA,GA,TENN,USC,MIZZ & FLA ST is a long road to hoe but a Miami game may be a breath of fresh air….ok just kidding but I would really like to see that series start up again….Go Gators

They could easily keep Bama-Tenn and Georgia-Auburn, and get rid of the other crossovers. I don’t understand why that’s never an option. It doesn’t have to be all or nothing. Pac-12 does it with the California teams, and the Big 10 will do it with Indiana-Purdue.

Yes, doesn’t make sense why they didn’t at least do this.

It seemed that they were at least considering a hybrid option. Didn’t they at one point say that they had four option on the table, but the end result could end up being somewhere in between? Also, I would argue that Vandy-Ole Miss be kept on. It;s got a storied history, but is never mentioned because most years those teams are mediocre.