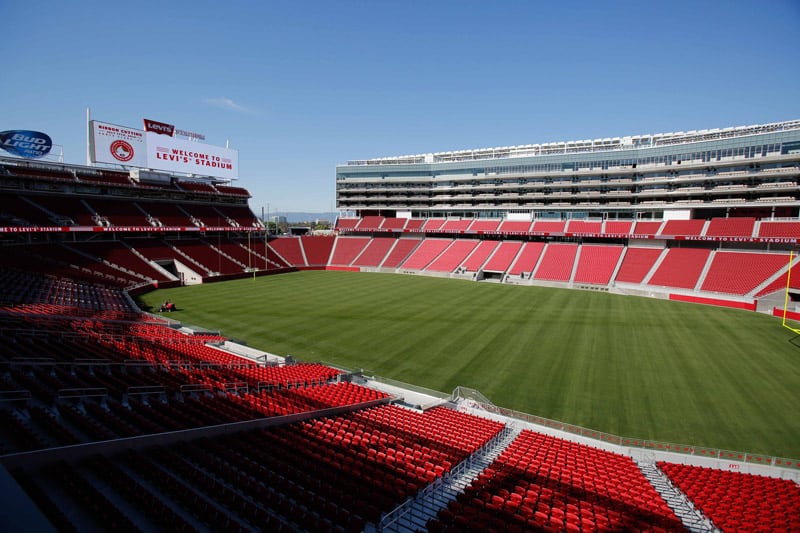 The San Jose State Spartans and Stanford Cardinal have been chatting lately about resuming the series, this time at brand new Levi’s Stadium in Santa Clara, CA, according to reports by the San Jose Mercury News.

The series, which ended in 2013 after 67 meetings dating back to 1900, could resume in 2015 when each squad has the capacity to add one more non-conference game.

One of the bigger issues that brought the series to a halt is SJSU’s desire to schedule home-and-home series versus the Cardinal. Only three times in the history of the series has the matchup taken place in San Jose. The last time the teams met at Spartan Stadium in 2006, San Jose State pulled off a 35-34 upset. Overall, however, the series has been dominated by Stanford 52-14-1.

Regarding the possibility of resuming the series, San Jose State head coach Ron Caragher said, “It’s good for the Bay Area businesses. Good for the parents because of proximity. Good for the fans, good for the students, good for Levi’s Stadium. It’s another opportunity for vendors to profit. So it’s just good for Bay Area football.”

Levi’s Stadium is the new home of the San Francisco 49ers and will host Super Bowl 50. The stadium will also host its first college football game on October 24, 2014, when the California Golden Bears take on the Oregon Ducks.

Stanford’s 2015 non-conference slate has the Cardinal traveling to Northwestern and hosting Notre Dame.

While on paper this looks good….if this game is scheduled,SJS will be over scheduled. This will lead to a lower win/loss record and as always,lower home attendence. I rather push this game back and schedule another OOC home game against someone more on our level…wins are more important then 4 major league programs in one year.

Because San Jose State will be playing in Hawaii in 2015 they will be able to schedule one more game to help make up for the cost of going to Hawaii. So, no they will not be over scheduled, they will be fine.

2015 looks a bit difficult to pull off. I guess New Hampshire could be dumped by SJSU, but that leaves a simply brutal non-conference schedule, and I would be surprised if the Spartans are good enough that quickly for us to take on the Cardinal competitively yet. However a four game series beginning in 2018 fits nicely. But hey if they can swing it for 2015, I’m all for it

A bigger issue is the dreadful home schedule this year for the Spartans, with no schools anyone cares to see (no offense to opponents we have, just none of you are a rival, so it’ll be hard to fill the stands unless the team blows out a P5 school early on). SJSU needs to get the MWC to fix the schedule. As it stand now we either host both SDSU and Fresno State or we travel to both (Fresno has the same issue). The three CSU schools should always host one CSU school annually to build rivalry. That means shuffling the home and road sequence of Fresno and San Jose against each, and one common opponent such as Nevada or UNLV. This needs to happen.

New Hampshire???? What the hell kind of game is that??? Holy crow,I rather play Sacramento State again then New Hampshire. Why can’t SJSU start playing more CUSA or MAC schools? Every school is on SJS’s level and most have decent name value. I mean schedule New Hampshire as a hoops game but not football….

With traffic issues seen yesterday for an MLS game, I think Stanford Stadium is a more attractive option.

Heads up San Jose State fans, if we play Stanford that year, then in 2015 we will have one tough schedule as we also would play Organ State, Auburn, Boise State, Fresno State, and Byu. Now that’s a tough schedule

I think all of the Mountain West teams need to stop playing FCS schools. I get that everyone, in every conference does it, But like mama used to say ” if everyone else jumped off a cliff are you gonna do it too”. Ok, so that might be stretching it a bit far. But the point is that if the MWC wants to stand out from the pack then we have to do some things different. Instead of the FCS schools schedule Sunbelt, or MAC or even the lower half of C-USA.

We have to strengthen the conference as well. Drop Hawaii, let them go independent if they want to, but cut them out of the MWC. Bring in Rice, UTEP, and North Texas, and move the Boise State and Utah State to the west division. That puts all of the schools west of the Rockies in the was, and all of the schools east of the Rockies in the mountain.

We will need to have at least half of our programs be bowl eligible every year, and we have to win those bowl games. And, we have to own that NY6 bid for several years in a row.

Become a Power conference through our own blood, sweat, and tears!