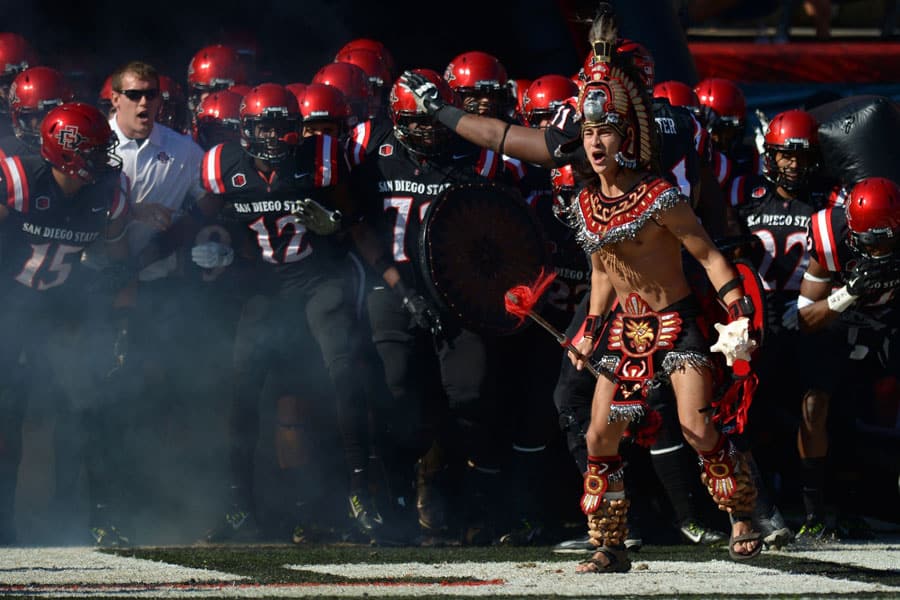 The San Diego State Aztecs have added the San Diego Toreros to their 2015 football schedule, the schools announced today.

San Diego State will host San Diego at Qualcomm Stadium to open the 2015 season on Saturday, Sept. 5. The game will be only the second on the gridiron between the two schools. In their first meeting back in 1961, the Aztecs defeated the Toreros 42-12.

The San Diego Toreros are a member of the Pioneer Football League in the Football Championship Subdivision (FCS). Last season, USD finished 9-3 and fell to Montana 52-14 in their first ever FCS Playoff appearance.

“We are excited to be playing San Diego State in football for our season opener,” said Ky Snyder, USD Vice President for Athletics and Facilities Management. “It’s a great opportunity for our student-athletes to play in Qualcomm Stadium in a unique environment. This is part of a cooperative between us and San Diego State on a number of initiatives that we’ll be releasing over the next couple of months.”

San Diego State was the last remaining FBS school with only 11 games scheduled for 2015 prior to today’s announcement. The Aztecs also visit Cal (Sept. 12) and Penn State (Sept. 26) and host South Alabama (Sept. 19).

I think this is USD’s first ever game against an FBS opponent.

This won’t count as a bowl-eligible win, will it? San Diego and the Pioneer League schools are non-scholarship, IIRC.

I think you are correct. A school needs to have > 90% of 63 allowed FCS scholarships (58 full time equivalents) to count as a D-1 opponent.

Wow, this could get real ugly. I think USD and BYU are the only two schools in the West Coast Conference for Olympic sports that play football. So USD likely to stay as a non-scholarship program.

It is like arm wrestling your grandmother @ Thanksgiving and touting it as big deal since she won the arm wrestling championship at her assisted living residence.

This is a generous gesture by SDSU. USD will get to play a local FBS school, get a lot of local publicity, allow fans to go to a nearby venue for the game, while getting a good paycheck to support and improve the program. They should also increase their prayer time prior to the game asking for no or few injuries.

That’s the spin they’ll put on it. But to me it seems like SDSU lost this round of scheduling musical chairs and this was better than an open date and an 11 game schedule,