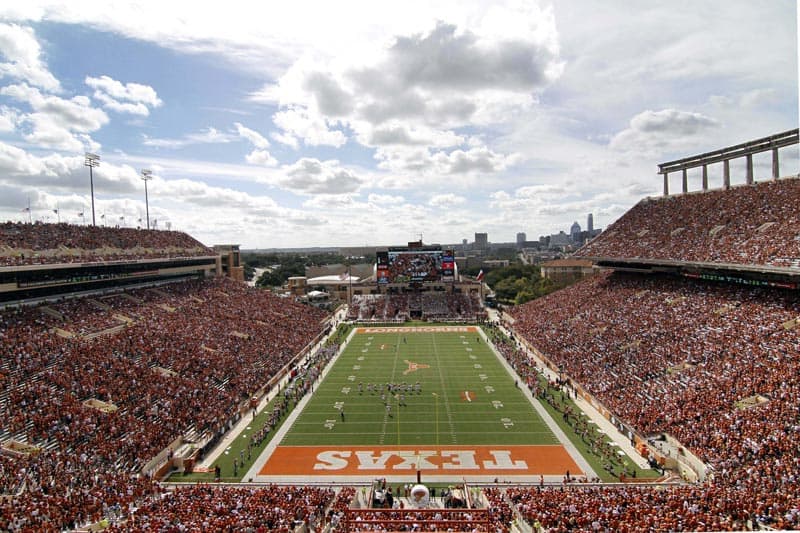 According to a report by Chip Brown of Horns Digest, the Texas Longhorns and the LSU Tigers have agreed in principle to a home-and-home football series in 2019 and 2020.

Per the report, Texas would host the first game of the series at Darrell K Royal – Texas Memorial Stadium in Austin in 2019. The Longhorns would then travel to face LSU at Tiger Stadium in Baton Rouge in 2020.

Texas was previously scheduled to play Notre Dame in 2019 and 2020 as part of a four-game series, but the two games were canceled. LSU would replace Notre Dame on Texas’ schedules for both of those seasons.

Last month, ESPN reported that Texas and USF were set to announce a three-game series with games in Austin in 2019 and 2024 and in Tampa in 2022. That series was officially announced today by USF.

If the Texas-LSU series is finalized, it will be the latest in a string of power five games added to each team’s future schedules.

And THIS is why most Texas fans that I know don’t really care much about when we play A&M again? At first there may have been more to it for both sides, but now? Given the chance to play A&M or… LSU for example? Give me a series with LSU. Heck, even before the Mississippi teams blew up this season I could name 4 teams that either have historic significance or that would make for bigger series… in A&M’s own division!

I’m not someone who’s against ever playing A&M again just on principal or just to spite them or anything… but playing USC or Michigan or LSU or Bama or FSU or Notre Dame or Ohio State all just sounds more exciting.

Jeff your longhorns are the 4th best team in TEXAS now Texas A&M will make more money than you ever will buy playing Alabama and LSU every year. Try to beat Baylor and TCU then you can find your place as second best in Texas again.

Mike you are an aggie. We own you in EVERYTHING except engineering. And even that gap has been closed. Now run along to your fat wife and boring country life.

We own them in engineering also