Report: Tennessee to host ETSU in 2018 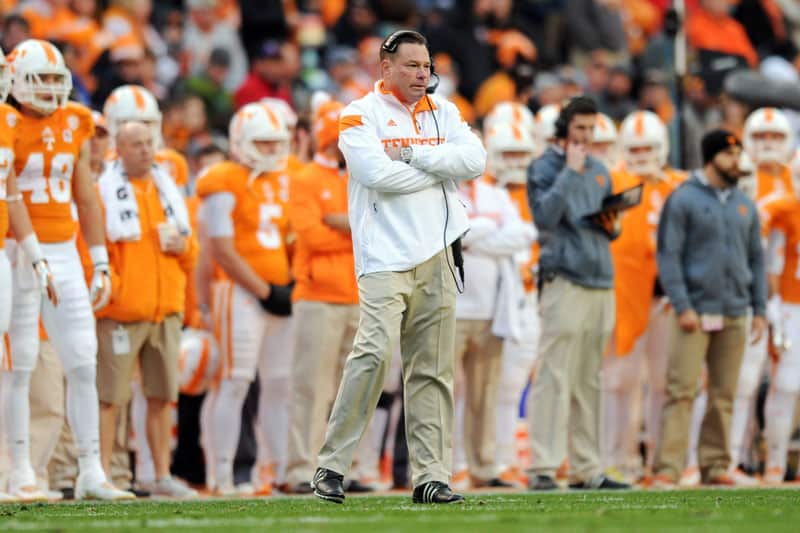 According to a report by the Johnson City Press, the Tennessee Volunteers will host the East Tennessee State Buccaneers in 2018.

ETSU will reportedly receive a $400,000+ guarantee for the game at Neyland Stadium in Knoxville. An official announcement is expected in the next few days and it may include the exact date the game is slated for in 2018.

East Tennessee State is rebooting their football program and begins play this season at home on Sept. 3, 2015 against the Kennesaw State Owls. The Buccaneers will be a member of the Southern Conference (SoCon).

With the addition of ETSU, the Tennessee Volunteers will have three of their four non-conference games scheduled for the 2018 season. The Vols are set to open the season on Sept. 1 against West Virginia in Charlotte, NC and later play host to the Charlotte 49ers on a date to be announced.

Tennessee’s Orange & White Spring Game is set for Saturday, April 25 at 2pm ET. The Vols open the 2015 season on Sept. 5 against Bowling Green at LP Field in Nashville.

More SEC powerhouse scheduling. They have sunk to the absolute bottom with a team that is just starting in FCS. This follows yesterday a SEC team scheduling 2 FBS transitions school when they games will be played while also having FCS schools those same years. That’s essentially playing 2 FCS schools playing a real FCS and a school under transition.

A complete joke. If I were an SEC fan, I would be embarrassed. They are the laughing stock of out of conference scheduling.

I’m going to assume your talking about Clemson and theyre in the ACC, not the SEC… and Georgia Southern is definitely not an FCS cupcake, just as Florida, Georgia Tech, and NC State fans.

If your talking about the Clemson announcement they are in the ACC not SEC. I’m not sure about Charlotte but Georgia Southern’s last transitional year was 2014 so in 2018 they will be fully FBS. As a transitional school they went 9-3 and won the Sun Belt Conference playing a full FBS schedule so I’m also pretty sure they would not be considered a cupcake.

This is purely a money game for ETSU, they need the bucks for rebuilding their program & Tennessee VOLS apparently are willing to give & “take a win”. The final score should be ridiculous.

I am a lifelong Vol fan and season ticket holder and i wish Tennessee would stop playing FCS opponents. The SEC is doing it as a whole now and it is embarrassing. I understand the smaller schools can use the money they get from these games to further their programs but other than that i cannot see any use for them except padding the win/loss totals each year to get bowl eligible.

Enough of the FBS/FCS games!!

I do not see why everybody thinks etsu is so bad. etsu is getting there program this year, but they have PHILIP FULMER helping them, they have a former sec head coach as there coach. SO etsu aint so bad

You must be a ETSU fan……

jinzo, I like both teams, I live in Johnson City which is where etsu is, so yeah Im a fan of etsu, but im a bigger ut fan, ETSU aint gonna be bad

The B1G is slowly quitting scheduling FCS games. And a a small number of major P5 programs never schedule an FCS game. Kudos to them! However most P5 programs continue to schedule a FCS game and I’m not going to whine about it. Keep in mind a number of FCS programs are perennially better than than a number of Group of Five and even some Power Five programs. SO no shame in scheduling those guys. I see no big deal scheduling ONE FCS game and helping to support an in-state program, But certainly the ETS game will negatively effect the Volunteers SOS and that of the SEC.

There is no excuse for a Power Five program to get themselves in such a bind scheduling TWO FCS games. North Carolina and Boston College, boo on you both! And the programs who continue scheduling a weak non conference schedule, including North Carolina State, Ole Miss, Miss St, Vandy, Okla St, Kansas St, Baylor, Colorado, and Arizona, Boo on you all! Hope it bites you all in the ass.

San Jose State scheduled New Hampshire in 2015. It’s a interesting choice to be sure of..

I AM AN EAST TENNESSEE STATE ALUMINI AND FORMER FORMER CO-CAPT OF THE BASKETBALL TEAM MY SENIOR YEAR … ..WHEN I SAW THAT ETSU HAD SCHEDULED UT IN FOOTBALL JUST TWO YEARS AFTER RE-STARTING THEIR FOOTBALL PROGRAM I THOUGHT WHAT THE HELL IS THE ETSU ATHLETIC DIRECTOR
THINKING ?? … THIS IS INSANE …. !!

Hey little brother! This is Scott Elkins from 1961! Hope all is well my man!

I is a favor to the college…i am a lifelong UT fan and I understand that in order for ETSU to get serious about their football program…they need to schedule an occasional powerhouse…Fulmer got this game scheduled. ETSU fans lost interest in the past and that is why the program was disbanded. They have taken note and are trying to respark the interest. This is why this game will come to fruition.