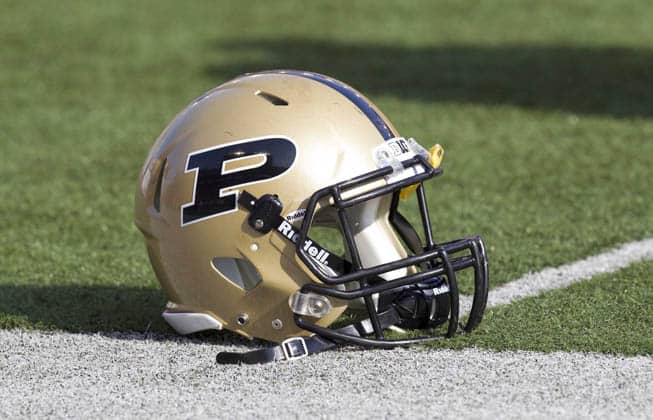 The Purdue Boilermakers have added the Missouri Tigers and the Virginia Tech Hokies to their future football schedules, plus they have altered their series with Notre Dame, the school announced in a release today.

In the first game of a home-and-home series, Purdue will travel to face Missouri at Faurot Field in Columbia on Sept. 16, 2017. The Boilermakers will then host the Tigers at Ross-Ade Stadium in West Lafayette on Sept. 15, 2018.

Purdue and Missouri have met eight times overall and the Boilermakers lead the series 6-2. In their last meeting in 1980, Purdue came out on top 28-25 in the Liberty Bowl.

Purdue has also scheduled a home-and-home series with the Virginia Tech Hokies. The Boilermakers will host the Hokies in their first ever meeting on Sept. 19, 2015. Purdue will then travel to face Tech at Lane Stadium in Blacksburg on Sept. 9, 2023.

Due to the Big Ten moving to a nine-game conference schedule in 2016 and Notre Dame signing an agreement with the ACC, the Purdue-Notre Dame series has been altered significantly.

The first change involves the 2014 game which is slated for Sept. 13. Previously a Notre Dame home game, the contest will move to Lucas Oil Stadium in Indianapolis and will be the “Shamrock Series” game for the Irish. It will kickoff at 7:30pm ET on NBC.

“We are excited to bring this great instate rivalry game to Indianapolis next season,” Purdue athletics director Morgan Burke said. “Both schools have great fan and alumni bases there, so it will make for an entertaining evening of college football.”

The second and biggest change is that Purdue and Notre Dame will no longer meet annually. The two schools were slated to meet at Purdue in 2015, 2017, and 2019 and at Notre Dame in 2016 and 2018. However, those five contests have been canceled.

“Jack (Swarbrick, Notre Dame A.D.) and I tried everything we could to keep the series going without interruption,” Burke said. “But, between the Big Ten going to a nine-game schedule and Notre Dame’s affiliation with the Atlantic Coast Conference, it just didn’t work out. The series is important to both schools, and we are pleased that we are able to extend it through 2026.”

“Jack and I tried everything we could…”

I am altering the deal. Pray I do not alter it any further.

I agree with you Josh. What makes things worse is they could have played the game. We had a week scheduled in October of 2016. They are apparently playing in Provo during that time.

That is too long of a break. Tonight WGN blamed it on the ACC agreement in 2015 and on an “overly aggressive” road schedule in 2016 (road games in September at Texas, October at BYU and November at USC). USC was expected, but hearing tonight that ND is going to UT and BYU? That was news to me. So what is the story why we can’t play 2017-2019?
Here is to hoping we can get ND and Purdue back on the field without a half a decade break.

The Big Ten should dump Notre Dame altogether. They don’t want to be part of the BIG, so drop their traditional; games vs. Purdue and MSU, since their annual game with Michigan is already done. Let them develop new “rivalries” with the likes of Ga Tech, Virginia, Duke, NC State and Clemson.

Well, Notre Dame actually had a long running rivalry with Georgia Tech before GT went to the ACC…. And with Pittsburgh… and Miami…. and Florida State…. and Boston College….. so…..

So, they’ve played Purdue more times and longer than ANY of those other schools David listed below. Sad to see this series being shuffled to the background, but this is all from the results of the conference realignment wave that blew across the nation a few years ago.

I do like that Purdue has replaced them with an up and coming Missouri team though.

That’s not the kind of decision the Big Ten makes at the conference level. They leave that to individual teams.

With ND adding five ACC games to their locked in Navy and USC/Stanford home/away pair, and a desire to regularly play in the Southeast & Texas, it leaves room for about one BigTen game per season, which will normally be either Purdue or MSU (not even one in 2015, since they had to give the ACC an extra game in 2015 to make up for being one game short in 2014).

For both Purdue and MSU, the extra national exposure you get from playing against even a mediocre Notre Dame team is worth scheduling that game when ND has space on its schedule, even if it isn’t an annual OOC rivalry game.

It’s clearly the result of Conference realignment because all the moving and shaking the past few years forced Notre Dame to link itself to a conference and give five games a year to the ACC so, it is like they are sort of in the ACC now. Which has taken an effect of the Irish schedule that we are all seeing now and the big loser is the Big Ten opponents that used to face the Irish annually. Nothing any of us can do about it though.

ND should DUMP the big preTENd! They have the softest non-conference games of any conference. They are currently 0-2 in Bowl Games (SHOCKER!!!) and 0-4 if you count Maryland and Rutgers (2014 Big preTend teams).

Maybe the Big PreTENd would earn more respect by scheduling tougher teams and ACTUALLY beating one or two!

Ohio State had a two season winning streak in which they did not play ONE team that was ranked in the BCS Top 25===>WEAK!!!!

Having lived in South Bend for 10 years, I have observered the following;

Notre Dame have traditionally scheduled weak opponents. They then ensure themselves a good record, a bowl at the end of year, and boast (In their own mind) what a powerhouse they feel they are. Lining up with the ACC ensures they only have to play a couple of tough games each year.