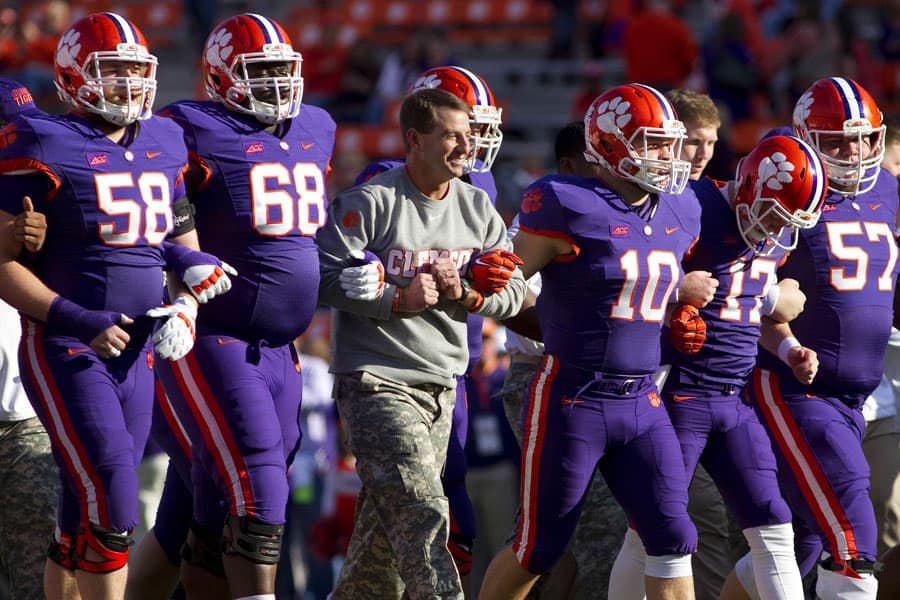 Last week we highlighted those teams that won’t play a Power program in 2015, at the other end of the spectrum are those schools who will play two.

Technically, these are the programs that will play with a one-game disadvantage this season.

Even though both teams hail from the same conference and division, it’s not quite an apples-to-apples comparison.

Of the 64 programs in the Power-Five leagues, only 15, or 23%, will play two Power opponents out of conference this season. The honor roll includes a whopping eight ACC programs (57% of the conference), four Big Ten teams and then one member apiece from the Big 12, Pac-12 and SEC.

It’s important to remember that the ACC, Big Ten and SEC all play four non-conference games, while the Big 12 and Pac-12 play only three.

This not only makes it easier to understand why the Big 12 and Pac-12 don’t have more members playing two Power foes, it also makes the SEC’s lack of representation here even more dubious.

Note: BYU and Notre Dame will be considered Power Five non-conference opponents by the ACC and SEC moving forward. Both are considered as such for this article.

Clemson played two Power opponents as recently as last season when it lost to No. 12 Georgia in the opener and then beat South Carolina in the finale.

The last time the Tigers didn’t play two Power games was in 2009, when they squared off with Middle Tennessee, TCU (then a Mountain West member), FCS Coastal Carolina and the Gamecocks.

The last time Louisville played two Power teams out of conference was last season, it’s first in the ACC, when it added a game at Notre Dame to its long-standing series with Kentucky.

The Cardinals won’t play two Power foes again until 2017, when they open up vs. Purdue in Indianapolis and then in 2019 when it meets the Irish again, this time in Louisville on Labor Day.

North Carolina hasn’t played two Power foes outside of ACC play since 2011, when it picked up wins over Louisville and Rutgers, both Big East members at the time.

The last time the Tar Heels faced two opponents that were in Power conferences when they played them was in 2003, when they lost to both Wisconsin and Arizona State on their way to a 2-10 finish.

Pitt’s last double-Power schedule came in 2012, its final season in the Big East. It beat No. 13 Virginia Tech and lost at No. 4 Notre Dame that year, finishing 6-7.

Moving forward, the Panthers have three additional seasons with two Power games out of ACC play: Penn State and Oklahoma State in 2016 and 2017 and Penn State and Notre Dame in 2018.

The Cavaliers played two power-foes out of ACC play as recently as 2012, when they edged Penn State and lost to No. 17 TCU (its first season in the Big 12).

Virginia won’t get double punched again until 2019 when it plays BYU (technically a Power team for scheduling purposes beginning in 2016 for the SEC and 2017 for the ACC) and Notre Dame. After that, it’s Illinois and the Irish slated for 2021.

Virginia Tech hasn’t stepped up this big in non-conference play since 2009, when it opened with No. 5 Alabama in Atlanta and then faced then Big 12 member Nebraska (No. 19). That team finished 10-3 and ranked No. 10 in the final AP.

The last time Wake Forest had a pair of Power teams on its non-conference slate was in 2012, when it wrapped up the season with back-to-back games at No. 3 Notre Dame and vs. Vanderbilt.

As of now, the Demon Deacons aren’t double-billed again until 2023 when they have games planned with, déjà vu, Notre Dame and Vanderbilt.

After 2015, the Longhorns are scheduled to play three consecutive seasons with two Power foes — the Irish and Golden Bears again in 2016 and then USC and Maryland in 2017-18.

Iowa played two Power teams outside of Big Ten play as recently as last season when it lost to Iowa State and beat Pitt in back-to-back games.

The Hawkeyes don’t have another season with two Power foes booked in the foreseeable future.

Michigan is another team fresh off playing two Power opponents out of conference, getting blanked 31-0 at Notre Dame and then losing to Utah, both last season.

Looking ahead, the Wolverines aren’t double-booked again until 2020-21 when they have back-to-back meetings planned with Washington and Virginia Tech.

After 2015, the Cornhuskers don’t have two non-conference power teams scheduled.

After 2015, the Wildcats only have one season booked when they’ll double-up — in 2018 when they play both Duke and Notre Dame.

Rutgers hasn’t played two Power teams outside of conference play since 2006, when it opened up with back-to-back wins at North Carolina and vs. Illinois. That was also the year it went 11-2 and finished ranked No. 12 in the final AP.

The Scarlet Knights’ next big splash comes in 2018, when they’ll travel to Kansas and then square-off with Miami (Fla.).

One of two Pac-12 members on the list, Stanford hasn’t doubled its fun since 2012 when it added a visit from Duke to its regular meeting with Notre Dame.

The standard-bearer for the SEC, South Carolina last added an additional Power team to its annual clash with Clemson in 2013 when it, like this season, opened up vs. North Carolina.

As of now the Gamecocks don’t have another double-Power season scheduled.

Note: Article updated to include Nebraska and UCLA.

Classifying Notre Dame as a nonconference is what’s messing up this whole list and making the ACC look a lot better than it really is in this regard. Letting ND have their independence cake and eat the ACC cake too is just ridiculous

While that’s true, some of these games were scheduled prior to Notre Dame jumping in. You’ll likely see some of the ACC teams not schedule a 2nd power five in years they know they play ND.

That still means 8 ACC teams are playing ten of their twelve games against Power 5 foes. That is more difficult and should be a better TV draw than three Sun Belt/MAC cupcakes.

Regardless of the ND agreement with the ACC, a lot of the teams would play 2 power 5 teams in a season. ND has always played ACC teams. I think everyone should schedule the same! If the ACC refuses to go to 9 conference games then it should be 8 conference games, 2 power 5 games, 1 group 5 game, and an FCS game or 2 group 5 teams and just skip the FCS games!

I’m only bringing this up because you acknowledged BYU as a Power foe (for scheduling purposes) in the Virginia blurb. If you include BYU then Michigan plays 3, Nebraska plays 2 (Miami), and UCLA plays 2 (Virginia).

The tone of this and similar articles bothers me a little, is Virginia Tech really stepping up their scheduling by playing at Purdue? Is that a tougher game than playing at East Carolina? If your going to compare schedules based off of conference prestige and perceived overall power level, please ovoid saying the actual power level of schedule is altered by having more or less Power opponents. It should be about the teams they are playing, not the conferences that their opponents hail from when discussing difficulty of schedule. Case in point Florida State played and beat 3 Power teams out of conference last season, but everybody were still claiming they played a weak or mediocre schedule.

That’s my opinion anyways, I’ll take ownership of it.

Added Nebraska and UCLA. Just an oversight because BYU was used as a P5 in her previous piece on teams that didn’t play a P5.

Right. The article is just based on the technical term of Power Five.

Virginia plays Ucla and Notre Dame and their easy game is against Boise State.

We can nitpick here, and point out that Duke is probably not as good as Boise. Certainly, they’re not all playing two monsters, but no one snuck onto this list be scheduling Indiana and Vandy either. One ‘good, and one weaker P5 is still doing better than most any other P5 team. I applaud these teams for making more of an effort.

That is the bottom-line. Some may scoff, but I give Rutgers some credit for at least scheduling two “non blue-blood” P5 teams than a school playing an FBS school and three traditionally lower-tier teams from the Sun Belt or MAC. At the least try to instead schedule the more stable G5 schools like Boise, Cincy, UCF or East Carolina. Do a 2 for 1 where they play at your place twice in exchange for a “home game” in their backyard like Paul Brown Stadium for Cincy, or in Charlotte for East Carolina, etc. Just a thought.

The criteria to be included in the playoff should be ten games against power 5 teams. Do it the old fashioned way – earn it. For group of 5 teams, two power 5 wins to be considered.

Duke and Baylor have traditionally been bottom feeders, but they have the resources to be successful – and have been in recent years. Non-Power 5 schools would love to have their budget.

If a school chooses to schedule three guarantee games in their non-conference schedule, then they need to win their championship to even be considered.

All of this demonstrates why the Power 5 need to institute standard scheduling rules that apply cross the board. I’m fine if some conferences want to play 9 conference games and others want to play 8 but I think everyone needs to play at least 10 of their 12 against Power 5 foes.

Let’s not confuse things here. All these teams above are playing teams from the Power 5 Conferences, plus Notre Dame and BYU. Except for Ohio State, some of these opponents are not Power teams.

I think the FBS teams should all have a schedule format, based on points.

If independent teams want to be a Power 5 team, they should make their schedule meet the requirements.

I think all the teams in the 5 Power Confrences should play 9 conference games, 1 team from a Power Conference (a mid-major, or an FCS school by their choice). The ACC scheduling is a joke. You only play a team from the other division (unless it’s a crossover game), once every 6 or 7 years. The ACC only does this so they can get as many teams in bowls as they can. Thy sent 4 teams with 6-6 records last year. That is why they are the 5th best conference of the Power 5.

If we are counting BYU, Texas has played multiple Power teams for most years since 2010. I don’t know what the article is talking about.

Boise State and BYU are better than 70% of the P5 teams.