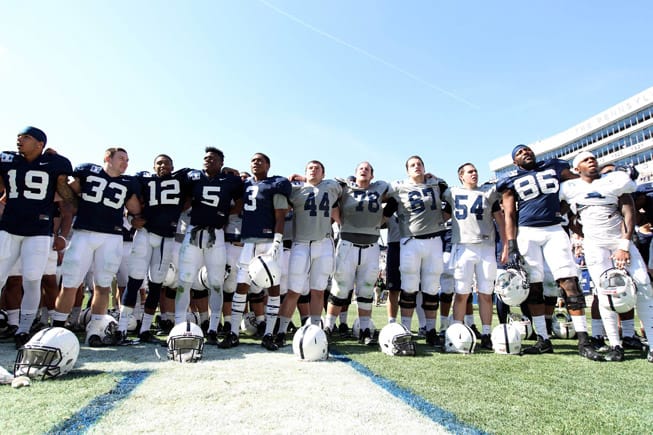 The Penn State Nittany Lions have added games against the Georgia State Panthers and the Kent State Golden Flashes to their future football schedules, the school announced today.

Penn State will host Georgia State at Beaver Stadium in University Park on Sept. 16, 2017. The game will be the first ever meeting between the two schools.

GSU will receive a $1.2 million guarantee for the game, according to Doug Roberson of AJC.com.

Penn State has also added a game against Kent State to their 2018 football schedule. The two schools, which also play in 2016, will meet on Sept. 15, 2018. The Nittany Lions officially lead the series against the Golden Flashes 2-0. PSU victories in 2003 and 2010 were vacated.

The addition of Georgia State in 2017 completes Penn State’s schedule for that season. The Nittany Lions need one more non-conference game to complete their schedules in 2015 and 2018.

Penn State also announced today that their 2017 home game vs. Pittsburgh has been moved up one week to Sept. 9. The game had been set for Sept. 16, but Pitt scheduled a home game against Oklahoma State for that date back in November.

While I’m not too flattered in adding Georgia State, there’s a potential silver lining to this cloud. They could actually prepare a home/home series with another PC team for 2015 and 2018. Perhaps they could look into NC State? There’s still the matter of finishing the series with Virginia, but I’m not sure if they’d want to break the trend of hosting the team on an odd year.

Penn State is booked for away games through 2024. Only thing that might be added against a PC team is a neutral site game, unless someone is willing to come to Beaver Stadium without a return game.

Alabama plays Wisconsin in 2015 neutral game already and will not play home-and-homes. PSU and Syracuse already scheduled to a home-and-home in 2020-21. Both Stanford and NC already have two P5 OOC opponents on 2015 schedules.

” and will not play home-and-homes”
Bama just got off playing a home in home series with Penn St.

Even though I am a Penn St. season ticket holder, I think their non-conference schedule through 2019 is deplorable and I am very disappointed that James Franklin has said on the record that he is not interested in playing any big name opponents. He just wants to play home games and that’s all. It’s not likely Penn St. is going to get a Power 5 Conference school to play a one-off game at Beaver Stadium.

If Franklin thinks he is going to sell out Beaver Stadium when Kent St. and Georgia St. come to town then he is fooling himself. Penn St. fans don’t show up for those crap opponents in September, anymore.

In 2008 we paid $1.1 million for Oregon State to come to Beaver Stadium for a one off game. Maybe we could entice a P5 team for the right price. Like a Mizzou, Miss St,KY or Arizona. Or a game with UVA which is also a P5 opponet. Also why not do what MSU did a few years ago and bring in Boise Sate for a one off game or b/c of the bowl ban in 2015 a neutral site game with MIA(FL) who wants to add Penn State to future schedules.

PSU fans, don’t hold your breath waiting for a quality OOC opponent. Take a look at Vanderbilt’s most recent schedules to see what you can expect (the 2014 schedule put together while James Franklin was still there: Temple, UMass, Old Dominion and Charleston Southern). Under Franklin, the toughest game Vanderbilt would play regularly was Wake Forest but even that series has been cancelled. An ongoing series against Northwestern negotiated by his predecessor was cut short after Vandy lost two in a row as was a game against Ohio State. Franklin won’t willingly play in a game he’s not sure he will win. But you do have to give him some credit… he was able to parlay success against a down SEC West and poor OOC opponents into a better job and bigger payday. Look for him to continue his success with more weak scheduling.

PSU has plenty of Major 5 conf opponents so the notion they “hold their breath for quality OOC” is ludicrous. Maybe you should have taken the 1 second to click on PSU future schedule since you’re already on this site.

Btw, Vandy has always played [email protected] OOC schedule, that’s not b/c of Franklin that’s what Vandy alway has done b/c they are usually cellar team or near cellar team in the SEC b/c they actually have academic standards.

Hearing multiple rumblings this as well. Looks like it will come with a Thursday night Neutral game on August 31st, 2017 @ Metlife

BYU’s schedule is full for 2015. Not going to happen. Someone will have to come off the schedule first.