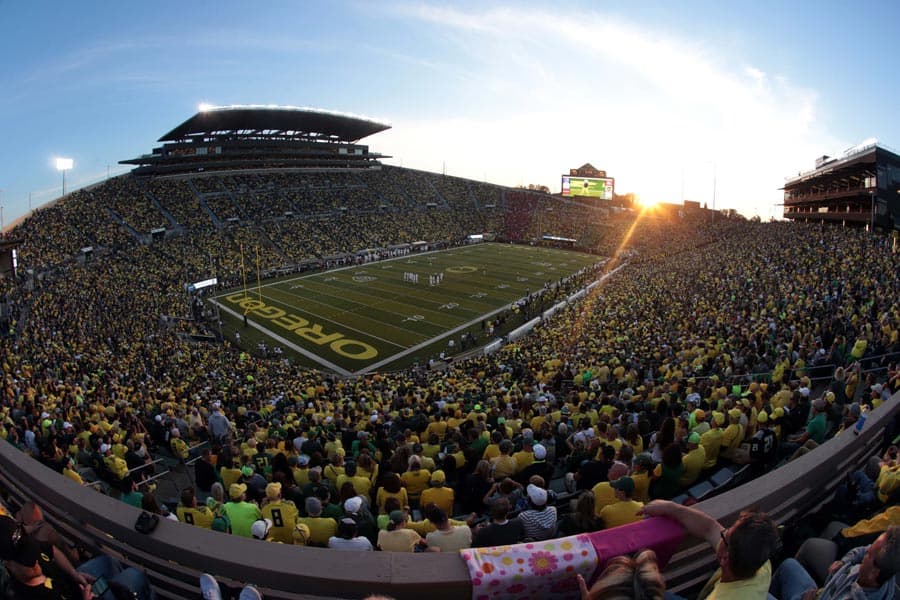 The Oregon Ducks will host the BYU Cougars in 2022, the two schools announced early Tuesday evening.

Oregon and BYU will square off at Autzen Stadium in Eugene on Sept. 10, 2022. The two schools have met a total of six times, with four of those contests taking place in Eugene.

The Oregon-BYU series is currently tied at 3 games apiece. In their last meeting in the 2006 Las Vegas Bowl, BYU beat Oregon 38-8.

Oregon now has their first non-conference matchup for the 2022 season and will look to schedule two more home games that season, per their release. In even years, the Ducks play four Pac-12 games at home and five on the road.

“This matchup fits our scheduling philosophy within the current landscape, which means facing top competition along with our Pac-12 opponents,” UO athletic director Rob Mullens said.

BYU now has four games scheduled for the 2022 season. In addition to the Oregon matchup, the Cougars are slated to host USF (Sept. 23) and travel to both Boise State (Oct. 8) and Stanford (Nov. 26).

“It’s a great opportunity to play an outstanding football team from the Pac 12,” said BYU director of athletics Tom Holmoe. “Oregon had an opening in its 2022 schedule and the circumstance was right for BYU. We hope to develop a long-term relationship with Oregon.”

The more significant question is who will Oregon schedule at home in 2018, after Texas A&M cancelled with short notice the 18-19 series with Oregon, putting Ducks in another scheduling bind? (In the past decade the the same thing happened with Georgia and Kansas State cancelling series with Oregon).

Auburn-Oregon was a possibility for a 2018-19 home-and-home. But that was not what Auburn had in mind. So Oregon reluctantly agreed to a “neutral-field” game with Auburn in Arlington for 2019.

So now with the single opening for 2018, makes it even more difficult for the Ducks to fill the schedule with another P5.

However the Badgers already have BYU on their 2018 schedule.

They could also do a Shamrock Series game with Notre Dame (or a game in South Bend in ’18 and a return date in ’21 or so).

I’d prefer you refer to us as Ole Miss or even Mississippi, but “missi” really??? I’d love to schedule ND (if possible), that would be a sweet matchup.

Oregon fly to Ireland? The Ducks would need two weeks off to recover that flight.

How about ND meet Oregon in Australia?

But really Ducks need a home game in 2018 as they have a 4home-5road conference schedule..

The Shamrock Series only refers to Notre Dame’s annual neutral-site game. It’s never actually been played in Ireland (the Navy games were home games for Navy). They could play it at JerryWorld or somewhere.

The Navy games are going to regularly become neutral site games as it serves both sides interest. Navy is joining a conf so they no longer have a s much freedom to go all over the country as they used to,. ND also wants to get to certain spots more often such as TX, CA, FL, etc…That’s why Navy game is going to be in Jacksonville in 2016 and in San Diego in 2018. I would bet 2020 is in Texas, All the other Navy home games are TBA for location and will be neutral sites that serve both schools interest in servicing fan bases and recruiting.

This is a surprising move by BYU. I agree that 2022 is the next time they can take a one-for-none given the upcoming imbalance. But, there is no guarantee Oregon will still be elite – perhaps Oregon is simply a top 20 team then. I thought BYU would consider such agreements only where an October or November date would result.

By 2022, BYU could even be in the XII, depending on how those chips fly.

What a joke. Terrible decision by Tom Holmoe to schedule another September one-for-none on the road. I’d understand if this were a neutral site game, an October game, or a November game, but this makes absolutely no sense at all.

My fellow BYU fans, please don’t make excuses for this horrific scheduling decision. We could’ve gotten a much better deal than this from someone else.

Haha, whatever you want to say. “We hope to develop a long term relationship with Oregon.” Oregon has expressed similar interest with BYU. Oregon might schedule something with BYU, but it hasn’t been agreed upon.
Either way, it’s a good move. Beating big name teams, even if they aren’t powerhouses that year or something is fantastic. Hopefully, BYU will be in the Big 12 anyway.

I agree that we need these games in October or November. Pac 12 will allow teams to do it for Norte Dame (Stanford and USC). But, I won’t ever be upset about getting a quality appointment any time of the year. Yes, we need better home games and better games outside of September but come on, Holmoe is rockin’ it the best he can. Love the match up. Would love to have them in Provo.

I agree with Bretano 100%. Holmoe consistently does great things. This is why I called this surprising, that’s as bad as I can get with Tom. It is possible that years that late are starting to book up. But there seems to always be late rework – UCLA and Mississippi State recently booked BYU one year out. And Syracuse and Boston College never seem to have anyone schedule beyond the following Saturday…

Byu needs all the p5’s they can get. You’re the joke hank. by the way. Byu has Stanford in November. Don’t bitch to hard. Be luck they even put you G5 ass on the schedule.

I don’t know….everyone called the 2015 1:done games @ Nebraska and @ Michigan horrible when they were scheduled. But how have they turned out for this season?

That two-point conversion made all the difference on that horrific day!

However a Oregon-Notre Dame home-and-home series 2022 or after would be good. But the so called neutral field games not so much. LSU in 2011 and Auburn in 2019 is more than enough of that. I support on-campus games. Leave the “neutral field” games to the conference championships and bowl games.

ND has no interest in playing a game in the pacific northwest. ND P12 opponents are strategic based on recruiting. They play Stanford and USC annually so they get to CA yearly for recruiting. They played ASU in home/home/neutral…..the neutral was in Texas, a state ND is making a huge effort to get to often. They scheduled several neutral sites games in the recent past in Texas vs Wash st and others. They are playing a series with Texas and A&M home/home.

ND is pretty obvious on where they want t o g ofor recruiting and that’s how they build their schedules. They want CA, TX, FL, GA..the 4 states that produce the most FBS scholarship players. They get CA, TX, as stated before also upcoming neutral site Navy game in San Diego. They are getting FL via Miami, FSU in the ACC deal and they also are talks of putting the Navy game neutral site in FL upcoming. They get GA via Gtech, a school they played pretty regularly even before the ACC deal and it’s no coincidence ND has a series vs GA coming up.

Notre Dame played Washington in a home-and-home in 2008-09. Eugene is not to far from Seattle or Palo Alto/Bay Area. Same recruiting base. Choosing to play Oregon, a perennial top ten team, in a home-and-home, would not be a detriment to recruiting. Stanford has not announced a game with Notre Dame for 2021 (or 2025 and thereafter). And USC plays at ND in 2021. So ND making a west coast visit to Oregon in 2021 would be within reason. That is, if Oregon was not already scheduled to play Ohio St. At any rate if Michigan St, Nebraska, Oklahoma, Michigan and Ohio St don’t have issues playing home-and-homes with Oregon, I don’t think Notre Dame would either.

I love this move, it is all part of Dr Tom’s scheduling philosophy. BYU is always willing to do a “one and done” with elite level PAC12 teams (USC and Oregon)
If there are teams that a perenially struggle in their divisions (finish 5th or 6th place) like Utah and Washington State. Those games are always targeted for home and home matchups

Perhaps WSU the opposite, Washington State and BYU have played four times and there has yet to be a game in Pullman.

ND is not about West coast, they are specifically about CA..thus USC/Stanford alternating. 2021 and 2025 dates with Stanford still possible or ND will play a Shamrock Series in CA, They haven’t missed being in CA for 30 years. All the other CA teams have a p5 already in 2021 and 2025 so they will work a deal with Stanford or do a neutral site game

Comparing ND to others is apples and oranges. ND specifically looks to go to certain regions, thus the abundance of neutral game recently in TX, series with TX and A&M, neutrals in Florida.

Schoup, so you’re thinking ND playing Washington home-and-home was a mistake on ND’s part? You’re much too transfixed on TX, FL. GA and CA. Sure that has been Notre Dame’s focus, but there are exceptions to the “rule”

And really there is not much diff playing in Palo Alto vs Eugene. Again same recruiting area. Recruiting advantages can occur in many ways, One game in Eugene against a perennial top ten team will not be a detriment in any way shape or form to Notre Dame’s recruiting methodology. A slight deviation from the norm maybe. As was Notre Dame’s visit to Eugene in 1982.

Anyway if a ND-UO series happens then great, If not then oh well.

After the way they both played yesterday, this could be a fair game after all.

In all seriousness, I wish BYU wouldn’t have agreed to this without a return trip by Oregon. By agreeing to a one-and-none, BYU is actually agreeing to an away game at Oregon and a home game vs. an FCS school. That’s not appealing to those of us who would love to purchase BYU season tickets, if only the home schedule were better.

BYU already needs FCS schools many years out to balance the schedule. My guess is that this guarantees a home game versus a Tulane or Arkansas State and that the payment is enough for 2 of those.

Would rather have a home and home with Oregon. If they won’t to return to BYU, then it isn’t worth playing. They already get $80M a year from Nike to help with recruiting, coaching…., so they can at least ‘risk’ playing BYU in Provo.