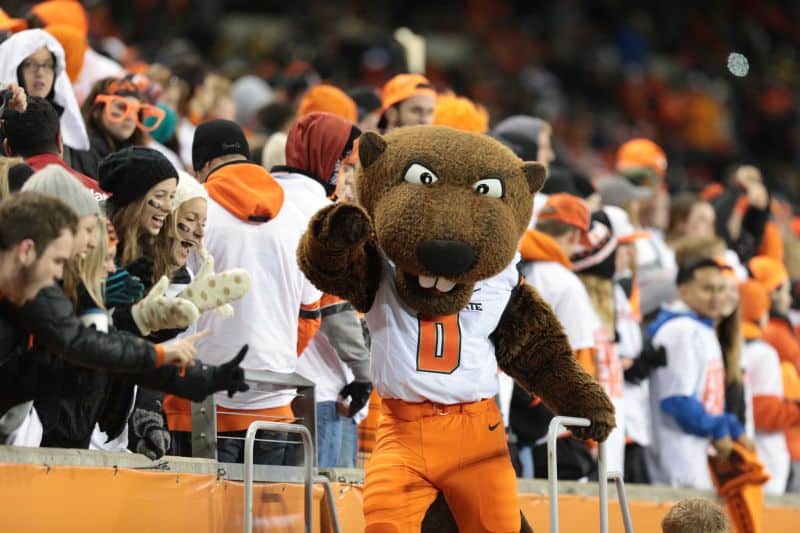 Oklahoma State and Oregon State will face off in a home-and-home series in 2019 and 2020, NewsOK.com reported Thursday.

The Cowboys will travel to Corvallis on August 31, 2019, with the Beavers coming to Stillwater on September 5, 2020.

The 2019 matchup will be the first between the schools on the football field.

“With the rigors of the nine-game Pac-12 Conference schedule, It’s very important to have a balance in the non-conference portion,” Oregon State Director of Athletics Bob De Carolis said in a release issued by the school. “The future schedule is a good mix of Power 5 conference members and interesting regional games including our backyard FCS members from the Big Sky Conference.”

Meh. Not a bad match up. On Oklahoma State’s side of things this is probably their best opponent recently outside of the FSU neutral site game. I’d still like to see them mix in a few slightly bigger name schools (they now have a game per year against Pitt, Boise State, and Oregon State as their biggest opponents over the period from 2016-2021), but at least they’re looking to put at least one power-5 caliber school (I’m giving them the benefit of the doubt on Boise State) a year with the anomaly of 2015.

Over/under on how many times the announcers will irritate Sooner and Duck fans by calling them “Oklahoma” and “Oregon” since they won’t be able to call them “OSU”…?

They had Clemson scheduled but Clemson backed out when the ACC decided to play 9 conference games but then went back to 8. Heard they had reopened talks but this was 2 years ago and still no announcement.

How hard would it be for the announcers to say “Oak State” and “Oar State”?

They can just call them by their mascot and it’ll be fine. “The beavers vs the cowboys…beavers are on the cowboys 37, 2nd and 7..” besides most people think Ohio state when someone says OSU.

Depends on the part of the country and the context. It’s not unusual in Texas, for example, to call Oklahoma State “OSU” since they come up more.

But announcers do that kind of thing already from time to time, amidst the action of a game. I’ve heard them call Texas A&M “Texas” which makes me cringe as a Longhorn fan. I’ve heard Michigan State called Michigan when the context is against someone completely unrelated and out of conference. I’ve heard Ohio State referred to as Ohio, which one would assume doesn’t lead to a lot of confusion in most cases.

Ah poor university of Ohio, no love for the Bobcats. I see your point though, that’s just announcers being lazy in my opinion.

Oregon State will be on a three year run of playing the other OSUs from 2018-2020 (Columbus, Corvallis, Stillwater, respectively, pending further conference realignment-Lord help us).

An interesting(OK, not that interesting) bit of history is that tOSU nearly also chose orange and black as its official colors:

“With the rigors of the nine-game Pac-12 Conference schedule, It’s very important to have a balance in the non-conference portion,” Oregon State Director of Athletics Bob De Carolis said

The slow starts were all on Coach Mike Riley. His teams couldn’t beat 2 eggs in a mixmaster to start the season, but were decent after the first couple of games.

Yep, seemed it was that way every year he coached, at least after he replaced his replacement. They’d loose to FCS schools, then go on to play in, and sometimes win, a decent bowl. If he ever had them ready at the start of the season he could have gotten his team a BCS bowl selection or two.

Go OSU, the one in orange.

So, in an alternate universe, this is a regular PAC-16 matchup! :)

So who are the other Pac-16 members, besides the obvious?

I think he’s referring to this “alternate universe”:

Too bad the conference schedules make it too difficult, but October 31, 2019 is a Thursday. This would be a perfect matchup for a Halloween night football game.