Ohio State paying over $2 million in guarantees in 2014 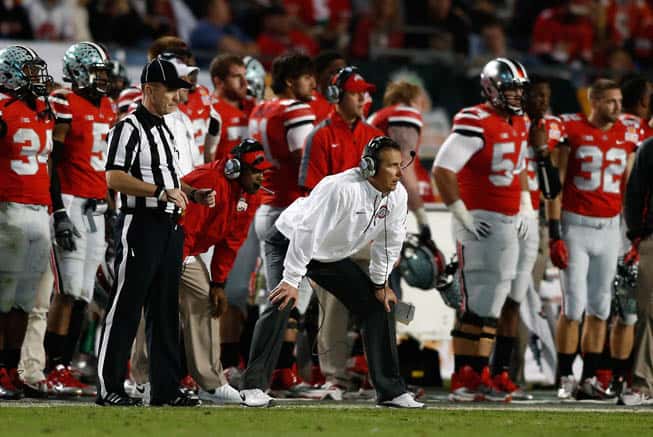 As first reported by The Associated Press this week, the Ohio State Buckeyes will pay out more than $2 million in guaranteed money to bring in Virginia Tech, Kent State, and Cincinnati in 2014.

According to the AP:

This news continues to stir three major debates in college football: Should big-time BCS programs schedule these “money games” with teams in conferences such as the MAC, Sun Belt, and even schools that play at the FCS level; How much is too much in terms of money spent for home wins; Are these games a necessary evil to help smaller programs fund their athletic departments?

One of the biggest issues regarding money games scheduled by major programs is competitive balance. Yes, each year FCS teams and MAC squads jump up and pull upsets on the road, but for every Appalachian State triumph over Michigan (2007) there are dozens of 72-0 Louisville thrashings of Florida International (2013).

For their part, the Big Ten has informally agreed to no longer play FCS schools starting in 2015. Regarding these once-traditional early season matchups, Wisconsin Athletic Director Barry Alvarez was quoted last year as saying, “The non-conference schedule in our league is ridiculous. It’s not very appealing.”

One has to wonder if conferences like the SEC will ever follow suit considering how difficult conference play is once the schedule hits October.

How Much is Too Much?

$2 million big ones might seem like a steep price for Ohio State to pay just to potentially snag a few home wines this season, but expect that price tag to rise substantially over the next decade. In 2012, the Florida Gators paid a record $2.75 million for home dates versus Bowling Green, Louisiana-Lafayette, and FCS foe Jacksonville State. Also in 2012, Nebraska paid Arkansas State $1 million to host the Red Wolves, a game the Huskers won fairly easily 42-13.

Could $2 million individual games or payouts totaling $5 million for three contests be that far in the future?

After San Jose State’s 34-13 loss at Stanford last year, I spoke with one of the athletic trainers. Upon asking how the team was holding up after a contest versus such a big, physical team like the Cardinal, the trainer said, “They’re hurting. Especially all of the lineman.”

Stanford paid SJSU approximately $250,000 for this contest. The series, played on a near-annual basis since the 1940’s, came to an end in 2013. In its place, the Spartans will now make $3.1 million over the next two years for games at Auburn.

Should the dozens of schools in San Jose State’s position continue to play these types of road contests? Is player safety, not to mention team morale after blowout losses, taken into full account for players and schools that are smaller in stature and don’t have the resources their big brothers have?

However, it’s the SJSU/Auburn-type matchups that fund non-revenue generating sports in the athletic department. If San Jose State were to schedule a Sun Belt squad at home instead of traveling to Auburn for two straight years, would the school truly be able to fund sports like women’s water polo and men’s soccer?

There are no easy answers to a debate that will only gain more steam in September when lopsided scores float across the crawl on the bottom of your TV set.

Rest assured,Stanford’s kids were feeling the same way afterwards. Doesn’t matter how big of a school you are,you still gotta strap it and play. Part of the reason SJSU was stinging a bit was the wrong defense being played,the 3-4 is designed to stop the run but SJSU didn’t have the personnel needed to run it,hence you have players playing longer because of both poor schemes and Stanford’s running game was playing. Look at SJSU games….it wasn’t because of effort they lost,well other to then Nevada,it was the coaching.

Maybe the cardinals were upset at how competitive the 2 previews games were and were trying to prove they belonged in the national title contender conversation? Not the best example you could have used.

Many players at Kent State and Cincinnati wanted to be recruited by OSU and relish the chance to play against the Buckeyes in the Horseshoe. Win or lose it’ll be a highlight of their careers. Cincinnati could be a competive game. At the least the money is staying in state for two games.

I believe it’s not good for football. OSU doesn’t have that strong of a schedule to start. Then they get the the ” committee” to favor them with a sorry schedule as to improve their chances for a playoff. When other teams do not get the committee on their side and fall down in rankings. Only to allow a larger school to get a playoff birth. The ncaa bcs is the biggest joke in college football. Something needs to be changed.