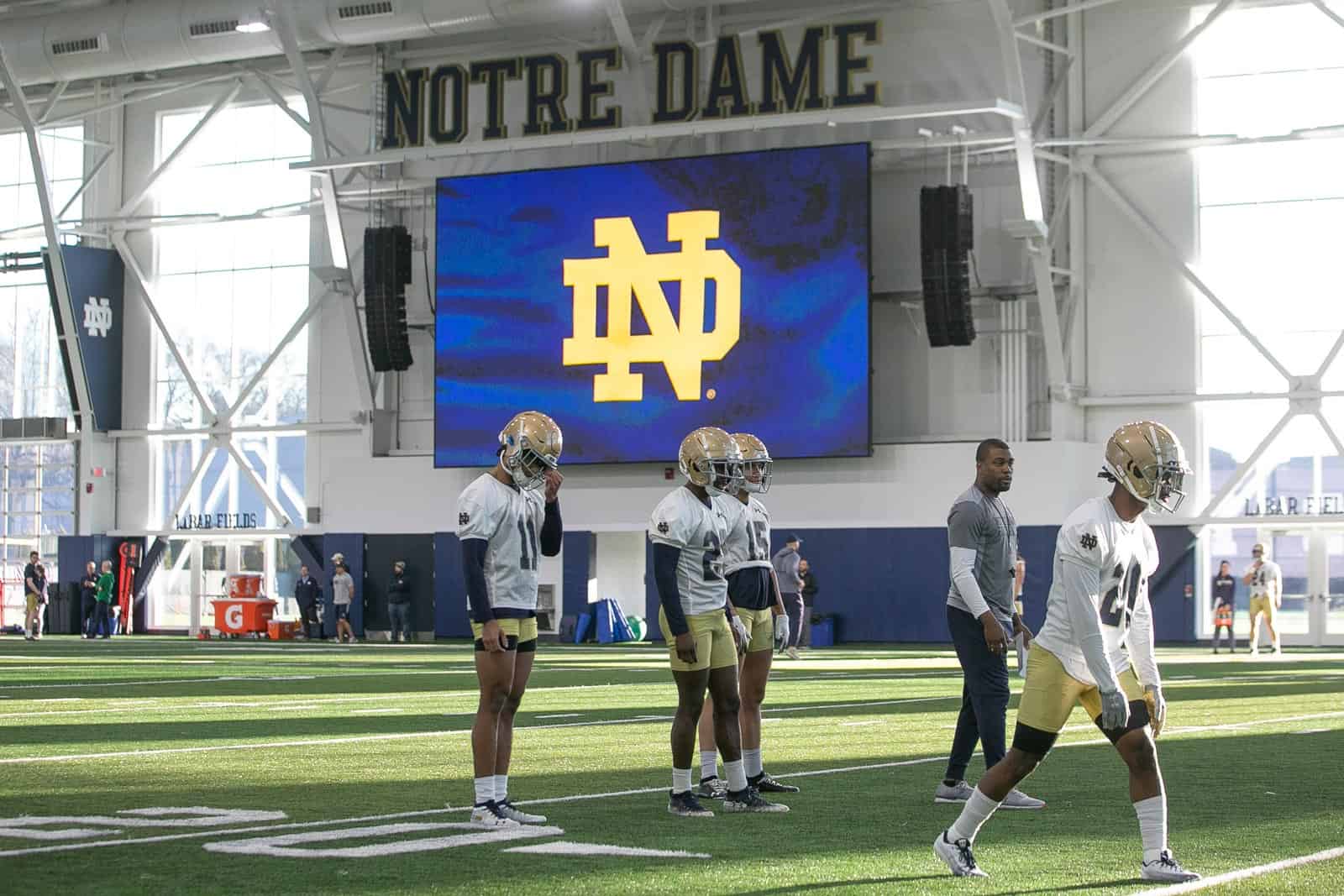 The Notre Dame Fighting Irish and USF Bulls have scheduled a three-game football series beginning in 2020, the schools announced Thursday.

The first tilt in the series is slated for Saturday, Sept. 19 in South Bend, Ind., at Notre Dame Stadium. The contest replaces Western Michigan on Notre Dame’s 2020 football schedule. Kick time and television arrangements will be announced  as the game approaches.

The two remaining games will be scheduled for later years, with USF again traveling to South Bend and Notre Dame visiting Raymond James Stadium in Tampa.

“We are very excited for our program and our players to have the opportunity to play Notre Dame in South Bend in front of a national TV audience during the 2020 season,” USF Vice President of Athletics Michael Kelly said. “It’s not only a terrific addition for this season, but will bring Notre Dame to play in Tampa for the first time and adds the Irish to a terrific slate of future nonconference opponents that includes teams such as Alabama, Florida, Louisville, Miami, NC State, Boise State and BYU.”

USF and Notre Dame have faced off once in school history, a 23-20 Bulls victory at Notre Dame Stadium as the lid-lifter to the 2011 campaign.

Watch Notre Dame cancel going to USF for a return game just like they did to BYU, after

I heard about that

Is it that ND has cancelled the return game to BYU or simply that it hasn’t been scheduled yet?

I thought it was the latter. Granted, it has taken a long time to schedule the game, and it also doesn’t look likely for the next 3-4 seasons.

Aside from this question about BYU, I can’t think of a return game that ND has ever cancelled or exercised a buyout for? Are you aware of any?

I think when BYU went independent, they initially signed two 3 game deals with Notre Dame. They were both 2-1 deals. BYU did the first 2 games in South Bend. Then Notre Dame went into this ACC scheduling arrangement and the second 2-1 deal was scrapped, with a promise that Notre Dame would return the game to Provo for the original 2-1 deal.

This would have been the perfect year for Notre Dame to return to Provo. The Fighting Irish were in need of a 10th game, and the crowd in Provo would have been minimal. Honestly, given that Notre Dame tried to go forward with the Western Michigan game (til its conference cancelled its season) and then goes out and signs a brand new contract with USF …. it makes me skeptical that Notre Dame will ever return the game to Provo. Notre Dame already plays so many ACC games, and then has annual games against Navy, USC, Standford, and plays Michigan and Michgan St on a fairly regular basis. I just don’t ever see the Fighting Irish making it back to Provo. Which is bummer.

Notre Dame’s agreement with the ACC for the 2020 season is for a 10+1 with the +1 to be played in the home state. So Notre Dame couldn’t go to Provo given that proviso. While BYU has desperately needed games after its original schedule was literally shredded, it seems unlikely that it would want to go to ND while the return game in Provo dating back to the 2012-13 South Bend games has yet to be scheduled.

ND Athletic Director Jack Swarbrick was on the record in summer 2019 that additional games would be booked against BYU and that more details would be forthcoming soon. Presumably that would either include at least one game in Provo or some alternate arrangement acceptable to BYU (there were rumors of a game in Vegas in the Raiders’ new stadium. Apparently tons of Catholics and Mormons in Vegas, and ND has never played a football game there).

I haven’t seen any announcement that ND has exercised a buyout and therefore won’t be going to BYU. I still expect the return trip to Provo to be booked and would plan to attend that game. If ND values the BYU relationship, and I think it does, then the two ought to be able to play at least a couple of games every decade. I certainly agree, though, that it has taken a very long time for the Provo game to materialize.

As an aside, if the +1 game weren’t required to be in-state, I think ND’s most likely choice of an away game among teams playing this season would have been to go to Annapolis to play Navy provided a matching date could be worked out after the start of the season was delayed.

Lastly, you are correct that the original deal was a 4-for-2.

Desperate as BYU might be to fill their 2020 schedule, it would be stupid for them to get the ND game they are owed this season. People will buy an entire season of tickets in Provo just to get the ND game. Not happening if fans can’t go. Last two times Wisconsin Badgers visited UNLV, before StubHub, you could get virtually free tix to any other UNLV home game, because folks bought the entire season to get one game. BYU will sell out out season if BYU has a ND home game with fans.