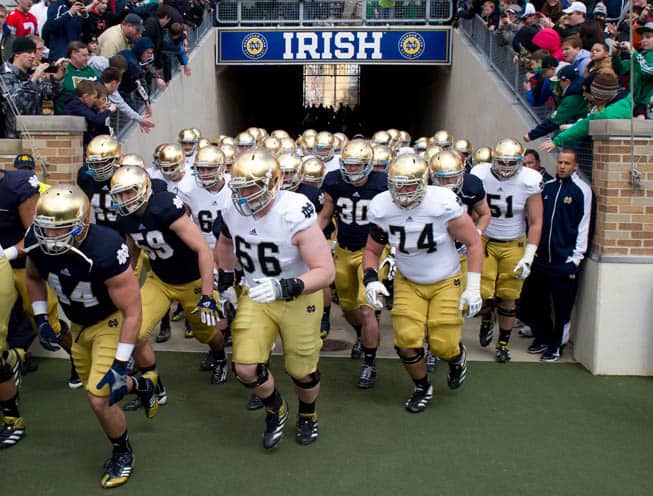 The Notre Dame Fighting Irish have announced kickoff times for their 2013 home games and their “Shamrock Series” contest against Arizona State.

Notre Dame’s “Shamrock Series” game against the Sun Devils will be played at Cowboys Stadium in Arlington, Texas on Saturday, Oct. 5. The game will be televised by NBC at 7:30 p.m. ET.

The Fighting Irish open the 2013 season at home against Temple on Saturday, Aug. 31. As previously mentioned, that game will be televised by NBC at 3:30 p.m. ET.

Notre Dame has already completed their Spring Practice. On Saturday, the defense topped the offense 54-43 in the annual Blue-Gold game.

Oklahoma, USC and BYU make this an exciting home schedule. All three teams lost to the Irish but are projected to be better this year. Congrats to you Mr Swarbrick, very happy with this home schedule.

Watch out Domers, State will be a 10 win team this year.

NBC has a good slate of Notre Dame home games this year. I don’t understand why NBC doesn’t purchase a few other independent games (i.e. Sept. 7 -Texas at BYU and Oct. 12 – GA Tech at BYU) to have a more complete slate of games. They allow ESPN to have to many good games that get lost in its glut of games. NBC could easily pay a million dollars per game for those two games and make a mint. It might be worth buying the rights from ESPN.

I think BYU likes their ESPN deal too much for NBC to get any part of it.

Its all about nd nobody will watch any byu game if notre dame is playin! No disrespect intended to byu