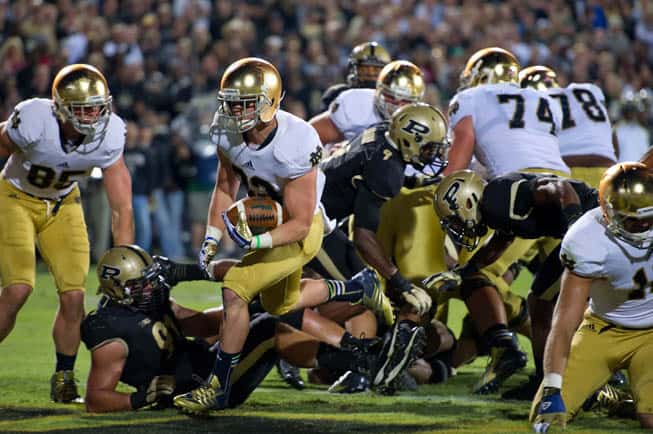 Notre Dame is currently scheduled to host the Purdue Boilermakers in 2014, but they are close to moving the game to Lucas Oil Stadium in Indianapolis.

“Close but not yet done,” a Notre Dame spokesman said in an email to the Chicago Tribune on Friday.

“Jack (Swarbrick) and I are still working. When we announce it, we’ll announce a comprehensive look at what we can do” Burke told GoldandBlack.com. “I think we’re close.”

The game would be part of Notre Dame’s Shamrock Series, which is an annual off-site home game that is hosted by the Irish. The Shamrock Series began in 2009 and has taken them to San Antonio, Bronx, Landover, Chicago, and Arlington.

Last month, Notre Dame athletic director Jack Swarbrick hinted that an ACC team could be part of the Shamrock Series in the future.

“I think you will see that a lot in the future, where we take a game that you would think of as a ‘regular’ game and take that game somewhere as part of the Shamrock Series,” Notre Dame Director of Athletics Jack Swarbrick told the Tribune. “I can certainly anticipate future ACC opponents being opponents in a Shamrock Series game.”

Purdue, which officially announced their 2014 football schedule in May, is slated to visit Notre Dame on Sept. 13, 2014. If the game is moved to Indianapolis, it’s likely the date would remain the same due to the inflexibility in Notre Dame’s 2014 schedule.

Due to the addition of five ACC schools, the Fighting Irish are currently over-scheduled and must postpone or cancel one opponent. In July, the Irish moved their 2014 game at Temple to the 2015 season.

another tough opponent for the overrated Irish

In 2014, Notre Dame plays Michigan, Stanford, Arizona State, USC, Louisville, and Florida State. You can talk about ND’s rankings all you want, but they usually play a much tougher schedule than most teams, and they don’t ever schedule FCS opponents (USC and UCLA are the only other schools who can say the same thing).

Overrated? Hmm, let’s take a look at our schedule from this year:
Week 2: Michigan (who is always a tough opponent)
Week 4: Michigan State
Week 5: Oklahoma
Week 6: Arizona State
Week 8: USC
Week 10: Navy
Week 14: Stanford
Wow, what a cupcake schedule right? And Purdue is sometimes a tough game. Not recently, but historically it’s been a tough one. It’s a rivalry and they always involve difficulty at a higher level than regular games.

Has Notre Dame ever played at college football game in Indianapolis, and if so, when was the last time they did so?

Notre Dame played Purdue on September 2nd 1984 at the then Hoosier Dome.

Should be tough for Notre Dame, they have 13 Games scheduled, if you look at their 2014 Schedule.

Yes, but they will drop one eventually.