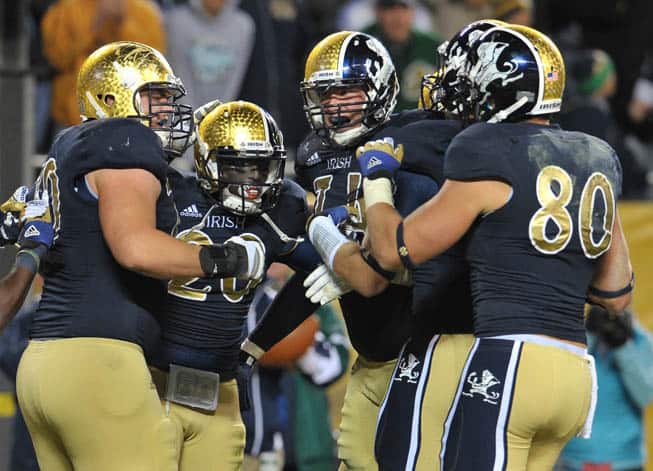 In 2009, Notre Dame started the Shamrock Series, which is an off-campus home football game for the Fighting Irish each season. The game helps promote Notre Dame’s brand across the country.

The 2014 Shamrock Series game has not yet been announced, but it could feature one of the Irish’s ACC opponents, according to a report by Brian Hamilton of the Chicago Tribune.

“I think you will see that a lot in the future, where we take a game that you would think of as a ‘regular’ game and take that game somewhere as part of the Shamrock Series,” Notre Dame Director of Athletics Jack Swarbrick told the Tribune. “I can certainly anticipate future ACC opponents being opponents in a Shamrock Series game.”

Swarbrick specifically mentioned North Carolina, Louisville, and Wake Forest as games that could be candidates for the Shamrock Series in 2014.

Notre Dame is still in the process of finalizing their 2014 football schedule. They recently trimmed their slate down to 13 games after moving their trip to Temple to the 2015 season.

One more game will have to be postponed or cancelled in order for the Irish to get down to the NCAA maximum of 12 regular-season games. The most likely candidates for movement are Northwestern, Purdue or Rice.

Yeah, why not play a North Carolina, N.C. St., Wake Forest or Duke in Charlotte at the home of the Carolina Panthers. Miami in Miami Dolphins stadium. Florida State in the Jacksonville jaquars Stadium and Clemson and Ga. Tech at the Dome in Atlanta. That leaves Louisville in Chicago, Syracure in the Brox and B.C. in the Patriots stadium. That sounds good to me.

Why not play at Duke, Wake, Louisville, etc.? Become a true ACC member!

Because true ACC members share their TV revenue. ND feels entitled to its own network. And neither of them will give.

Why not play at Wake Forest and Duke? For one thing, their stadium capacities are among the lowest in Div 1, about 31k and 34k. In contrast, ND stadium seats more the 80K. That’s a gate difference of about $5M alone, not counting concessions, parking, bookstore, apparel/accessory purchases, etc. Beyond financial, there is also additional prestige/exposure reasons to playing in an NFL stadium. The players and fans love it.

Why not join the ACC fully in football? Yes, part of it is financial, but it mostly reflects Notre Dame’s national character – students, players, fans – come from around the country and the world. Conferences are are regional in nature,

Blah, blah, blah, blah…same old song and dance. The rest of the conferences need to tell the Irish where to go and show them the door. They are not special anymore, just another school. I do not agree that conferences are regional anymore. The ACC stretches from New York to Miami. The SEC from Florida to Missouri and Texas to South Carolina, The Big Ten will soon be from Nebraska to Maryland. That is not regional!

LIke Notre Dame really needs to promote their brand across the country. They’re Notre Dame, and the media does a fine job of shoving them down our throat each week.

ACC teams should think out of the box about playing ND in a large venue. Playing ND in Texas would help their recruiting. Miami gets it. FL State gets it. BC gets it. Maryland gets it. Your minds and stadiums need to grow. You are not just a basketball conference any more.

Yes they are still just a basketball conference, please stop kidding yourself..

The ACC wanted Notre Dame, and they got what they deserved. Notre Dame wants to play all their home games against ACC opponents at South Bend. When it comes time for Notre Dame to play on the road against an ACC team, they want to play at a neutral site. Oh well!, be careful for what you wish for.

The neutral site game is a home game for ND, and has been since the Shamrock Series was put in place. If the other teams want to play their home games against ND on a neutral site, that’s their decision. I would if I was Wake Forest or Duke, or even NC State or UNC. Their stadiums are minuscule, compared to the NFL stadiums nearby. Also, the Syracuse games were already slated to be in East Rutherford before ND joined the ACC. You might want to try researching before looking foolish

Oh, and FYI, the teams that have been mentioned in this article as possible 2014 Shamrock Series teams? They were already confirmed as home games for ND. So ND would actually be moving a home game to a neutral site. That doesn’t bode well for your MO though…

Do some research next time

All you irish haters… Amusing.

Irish hatters just don’t get it! I bet if you ask every ACC team who is slated to play the Irish next year where they want to play at, I would put money on it that would want to go to the ” DOME ” sure there are more appealing stadiums but believe it or not schools want to go play in South Bend. Go Irish!!!!