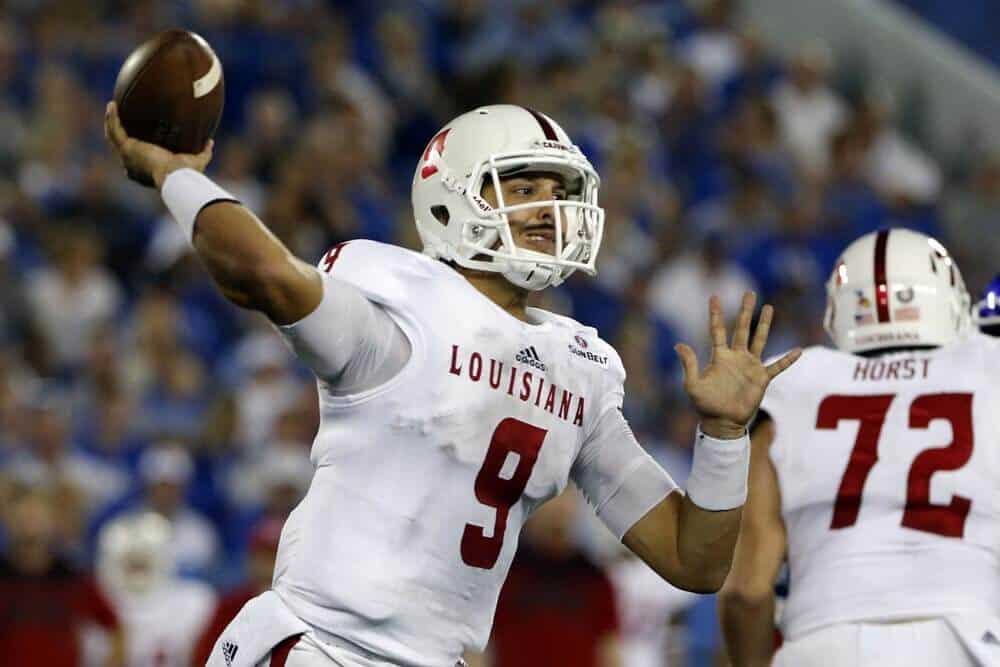 The New Mexico State Aggies and the UL Lafayette Ragin’ Cajuns have scheduled a home-and-home football series for 2018 and 2019, both schools announced on Wednesday.

In the first game of the series, New Mexico State will travel to take on UL Lafayette at Cajun Field on Sept. 8 or Oct. 6, 2018. The Aggies will then host the Ragin’ Cajuns at Aggie Memorial Stadium in Las Cruces on Nov. 16, 2019.

New Mexico State and UL Lafayette, both current members of the Sun Belt Conference, have met 11 times on the gridiron. The Aggies beat the Cajuns 37-31 at home this season and now trail 6-5 in the overall series.

New Mexico State will be playing their final season as a member of the Sun Belt Conference in 2017. The Aggies will then compete in 2018 and beyond as an FBS Independent.

“We are very pleased to announce our agreement with Louisiana,” NM State Athletics Director Mario Moccia said. “As we have said, securing games with Group of 5 opponents is critical for an opportunity for future success.”

On Monday, New Mexico State announced a home-and-home series with the Wyoming Cowboys. New Mexico State will host Wyoming on Aug. 25, 2018 and will travel to play the Cowboys on Sept. 21, 2024.

The Aggies now have three games announced for their first season as an FBS Independent in 2018. NM State is scheduled to open the season vs. Wyoming on Aug. 25 and then visit Minnesota on Aug. 30 before taking on the Ragin’ Cajuns.

UL Lafayette now has three non-conference games scheduled for the 2018 season and four for 2019. Other games in 2018 include trips to Alabama on Sept. 29 and Mississippi State on Nov. 3.

The Cajuns could be joining NMSU in leaving the Sun Belt in 2018.

Only here, ULL is in my projections to become an all-sports member of C-USA, as are fellow Sun Belt schools ULM, Arkansas State and Texas State and OVC schools EKU and Jacksonville State.

This comes after C-USA would lose Charlotte, Southern Miss, UAB, Marshall, Rice and UTEP to the American who loses Cincinnati and UConn to the ACC and Houston, SMU, Memphis and Temple to the Big 12 (who also adds BYU and Boise State).

The Sun Belt would replace its lost schools with Southland members Central Arkansas, Lamar, Sam Houston State, and McNeese State, Big South schools UNC Asheville and Liberty, along with FGCU of the ASUN and James Madison of the CAA (all but UNCA and FGCU play football).

This is wishful thinking at best. SMU, Memphis & Temple add nothing to the BIG-12 but a couple of victories for Kansas, they would be doormats in that conference.
Not sure if C-USA could survive another hit from ACC & the SUN BELT should be fine since all they do is bring FCS schools in.

UTEP doesn’t move the needle for the American and is too far out west (in addition to not being relevant at sports). SHSU would most likely not make a move unless SFA joins them, but right now leaving the Southland would be bad logistically considered how close all of the schools are to one another. Nobody in their right mind would touch Liberty with a 10 foot pole, that school and its administration are a dumpster fire.

Sun Belt would take Lamar over SFA because Lamar has history in the conference, being there most of the 1990s.

More like a couple more losses for Kansas to endure. Only one of those four Kansas would want added is SMU. Memphis beat Kansas 55-23 last season and 43-7 this season, and I think Temple is vastly superior to Kansas at the moment, even with the coaching change. Not that any of that matters, Big 12 already said they aren’t expanding. Everything Z Man posted is just a pipe dream.

Big 12 could change its mind about expansion in a year or so if they still get left out of the playoff for example.